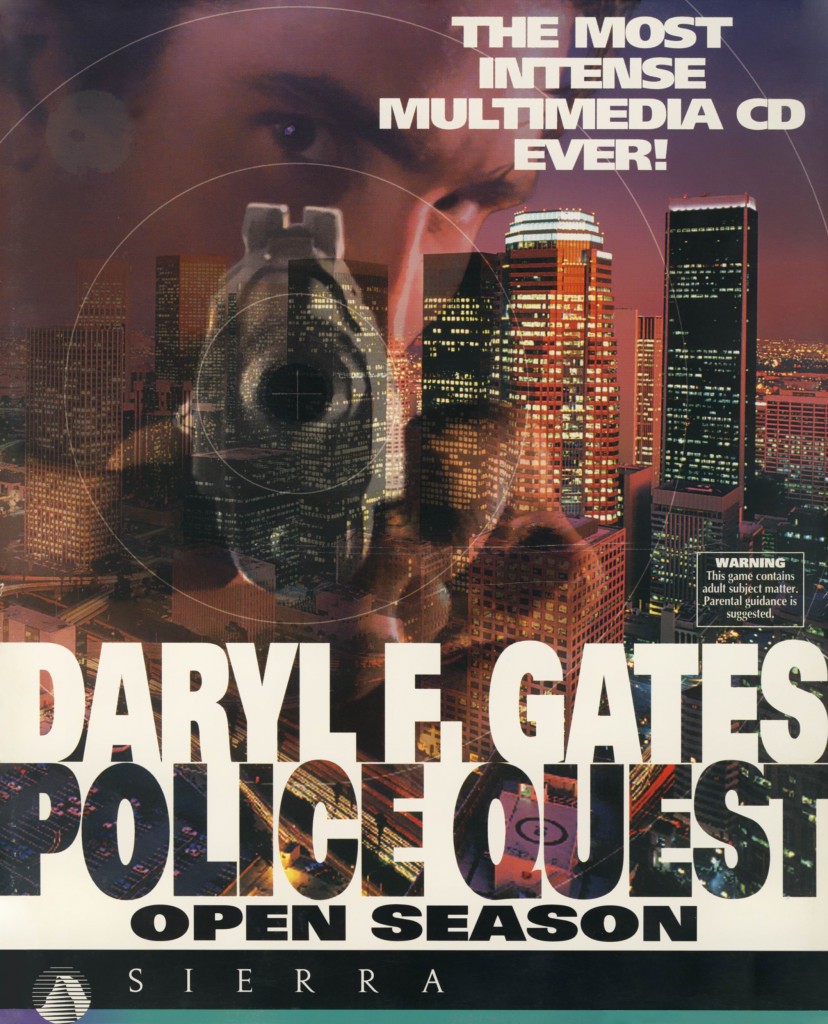 Imagine if there was a game that had all the basic elements of a decent adventure game, but with none of the cues, hints, or logic of any ordinary game of the genre. It almost feels as though someone dumped the contents of a model airplane onto the floor with no instructions, said “good luck” and “happy eleventh birthday,” and then spat on you. (Thanks, Dad.)

I would definitely place this game into the category of “simulator”. Yes—Police Quest 4: Open Season is a crime investigation simulator that adds a level of realism that I never asked for or wanted in a game…ever.

Can too much realism be a bad thing? 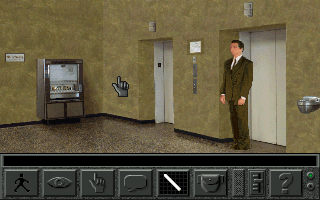 The only way to describe this game is that it has the look and feel of a Seinfeld episode and the running themes of a Dexter episode. But wait! That sounds totally awesome, right? Great observation. I would love to agree. However, as the game gives you overly-realistic responsibilities and little clue as to how to complete them on your own, it discourages you from ever wanting to be a ’90s cop again.

Like many other games that are point-and-click driven, you are witness to a character that you have no direct control over. Instead, you click on items, people, and other story-driving areas of the screen to solve the puzzles and proceed. The bottom HUD is equipped with several tools, like “walk”, “speak to”, and “touch”. As a side note, the main character looks like a douche. 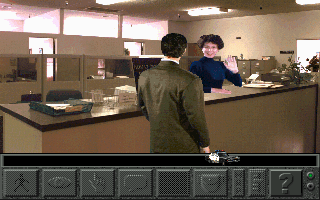 He is the most valuable tool.

The first thing I noticed about the game is that all of the characters (at least in the close-up scenes) are real-life actors. WOW. And I thought Stonekeep had a dedication to detail. Between that and the impressively fluid character movements, the entire game has a movie-like quality to it. 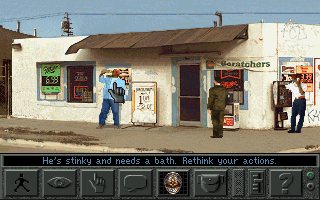 The second thing I noticed is the racism. Yikes. I will gingerly step into this aspect of the game because it was pretty distracting and surprising. For the entire first act of this game, the gangs and other characters you need to interrogate are all of African American descent. The dialogue they have is all “ghetto”. Even the amazing motion capture is used to give the African Americans’ movements and gestures a sense of “jive flava” that is straight out of the French Prince of Bel-Air intro. I think I even saw someone rolling dice on the street. (I really wish I were joking.) The game feels like an old Cops episode. I discovered that the game’s developers actually recruited an old police officer for accuracy and fact-based stories. 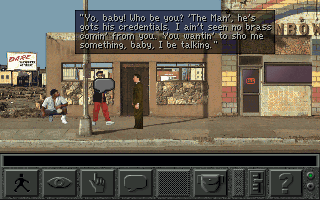 Aside from providing a totally one-sided view of the criminals, the police officer who helped with the game’s development also took the liberty of ensuring that every aspect of your character’s daily activity was accurate. Now it may sound crazy, but I don’t think the player really wants to go into the inventory and put on his badge every time he enters headquarters. Also, finding and filling out the correct paperwork to practice on the gun range is straight up anti-fun. The unbearable monotony is blatantly a message from the policeman: “See kids, being a police officer isn’t all fun and games; it’s a lot of hard work!” No shit. Why not spend the entire first half of the game in the police academy, and the rest of the game getting donuts and playing Solitaire in a parked police car?

It was this aspect of the game that really killed it for me. Honestly, I can’t see how anyone would want to complete Level 2, which consists of the following (in order): talking to your boss, properly navigating through the office to your desk, finding the correct paperwork in your desk, filing the correct paperwork with the correct crime scene picture, giving it to the correct co-worker, going on the company computer and reading an article, and wandering the halls of the police station until you find the god-forsaken exit. Oh, and then you have to punch a female reporter in order to move on. Now that is just offensive! I mean, nobody wants to fill out paperwork in real life, let alone in a videogame! Scandalous. Honestly, this “over-realism” leaves me wondering why anyone would want to leave their 9-5 job and come home for a chance to play this… 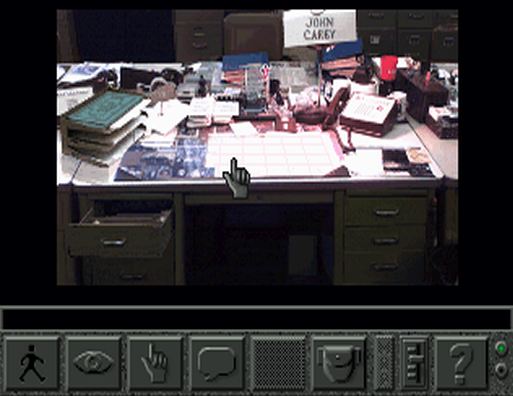 I just left this hell.

But let’s give the “would-be” adult male player the benefit of the doubt. Maybe this person wants to escape the bonds of his normal life and play the exciting role of a detective hot on the trail of a murderer. This scenario would unfortunately also be hindered by the game’s absurdly boring and aimless wandering. The player has to do things in a specific order in order to progress. If you miss an item or step, you may not be able to get to that area again, and the game is ruined, unbeknownst to you. 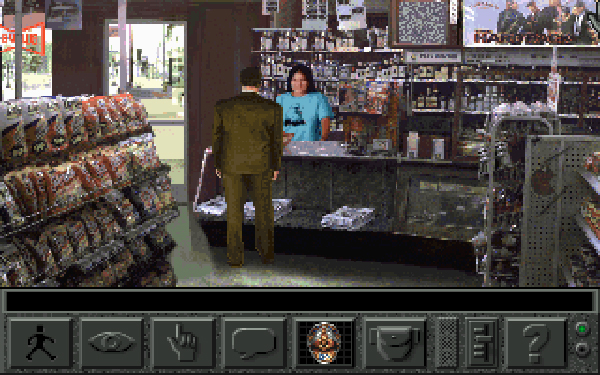 I apparently forgot to buy glue at this point and had to start over.

So who exactly was this game made for?

Children? Nope. I’m just going to shoot that one down right now. I already mentioned the stubborn precision required to progress through the game. Most kids don’t even have the patience to read this article. Philistines. The Police Quest series is clearly not for children. Too much realistic, disturbing, and awesome violence. These sadistic images are pretty staggering. At one point early on in the game, you open a dumpster and see this: 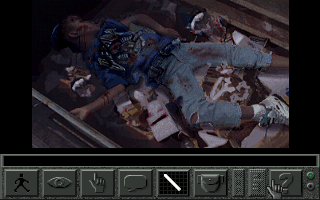 “You find nothing unusual”—Racist Game

Seriously disturbing violence. So let me talk about kids for a second. Funny thing about children: they act all weird when seeing other children’s lifeless corpses in dumpsters. I have no idea why. Violence and videogames have been a match made in heaven for years now. But this game is different. Maybe the realism is again the culprit. It feels…wrong. I know children are murdered in real life. I just don’t want to play a game that makes me witness it firsthand with such realism. I can’t imagine anyone who would. I look at videogaming as a form of escapism designed to get people’s minds off their jobs and maybe even forget for just one moment how horrible the world is. How exactly does this game do that? The game is filled to the brim with a strange mixture of realistic chores and realistic gore that makes me question why I wouldn’t just put more effort into my real life.

So can too much realism in a videogame be a bad thing? The answer is, “Yes, easily.” While the game’s graphics are way above average, the aforementioned deficits may be too much for some people. With the ballsy violence and interesting story, the game is definitely noteworthy. But in the end, the monotony is what ruins Police Quest 4. It’s simply not very fun to play.

The “making of” video.