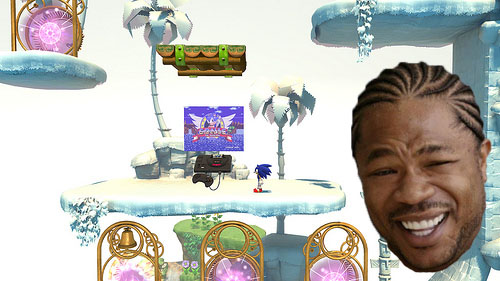 Sega has announced that Xbox 360 and PlayStation 3 players can unlock Sonic the Hedgehog for the Sega Genesis in Sonic Generations.

I don’t like being critical of the news (yeah, right), but surely this seems stupid. How many times has Sonic the Hedgehog been released?

I’ll tell you. This game has been released for over twenty consoles. If you haven’t played it by now, you never will. Why does the game need to be released again? Why within Sonic Generations? It just seems…pointless, you know?

Sega had this to say:

Save up your points and then go to the Skill Shop, where you can purchase the “SEGA Genesis Controller”, which will allow you to access and play Sonic 1. You can also spend your points to get infinite continues for Sonic 1.

Oh my GAWD! Gamefans! Fanzens! Tonight, this very night, in this very ring, we are bringing you what could be the greatest match EVER in the history of videogame wrestling!