There’s a lot of free games available on the iPhone, but they’re all rubbish in every respect. Blood & Glory is an exception to the rule.

Ignoring the fact that this game is designed to steal your money through in-app purchases, everything else defies expectations. This is the best-looking iOS game that I have played (yet). Because the game takes place in such a small arena, the developers were able to throw a great deal of detail into the characters and equipment. This game looks like it belongs on a console.

The goal of this game is to win increasingly difficult tournaments. To gain the upper hand, you can buy new armor, helmets, weapons, shields and potions using the game’s virtual currency. You can earn money by winning matches and tournaments and by leveling up. You can also gain more fake money by paying real money for it. If I ever find out you’ve done that, I will shoot you right in front of your family, because you are what’s spoiling this for the rest of us.

Blood & Gore-y is remarkably robust, with the ability to block attacks, evade them or even parry them. Doing so creates openings in the enemy’s defense, allowing you to strike. Land a strong combo to see their health get shaved off really quickly. Reusing the Up, Up, Down, Down, Up combo is the key to ultimate victory. Successful combos will increase your special bar, allowing you to perform one of three different special moves. 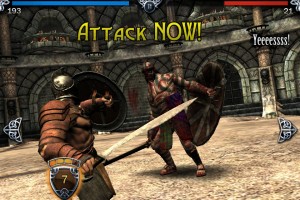 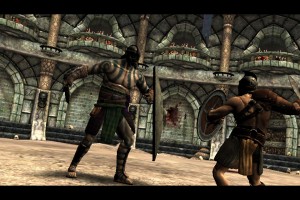 The Blood & Glory Channel. All QTE, all the time.

Too much information, right? All you wanted to know was whether you get to kill things. Yes! Yes you do. You get to kill human beings in a bloody fashion.

Upgrading your gladiator and fighting efficiently are key to clearing each tournament without dying, getting “Invictus” status for each of the tournaments. I don’t know what this does, but it looks pretty to have the gold medals lined up on the tournament selection screen.

As you might expect with it being free, Blood & Glory is supported by ads. Occasionally, this cripples the game and causes horrid slowdown. There are few things I hate more in a game than making a mistake because the game cannot keep up with itself.

I do not recommend Blood & Glory. To be honest the game is unfair. You earn money slowly but the game becomes difficult very quickly. This is designed to panic you into paying for stuff. You could always just uninstall the game and forget you ever played it.

If you feel like wasting your savings, buy a Nintendo 3DS instead. Wash yourself of this filth; you’re too good for it.