For those foolish fools who purchased a Nintendo 3DS, look what’s available as of right now! Posted a whole day earlier than expected, the new System Update for the Nintendo 3DS adds game modes, puzzles, features and channels! You could say this update has been “eagerly anticipated,” but I think that sounds a little like Latin for “should have been included at launch.”

Here’s a breakdown of the new features. 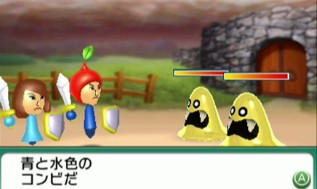 Mii Plaza has been upgraded. 57 new hats have been added, but you have to work for them. You can unlock them by achieving criteria or completing stages in StreetPass Quest 2, the new updated Quest mode. You can access this mode after having beaten StreetPass Quest twice. Quest 2 once again focuses on saving the monarch (and now his two children, too).

This mode has branching paths, as well as the ability to re-hire heroes you’ve met and fight battles with two heroes simultaneously. You can purchase items in battle to assist you by spending Play Coins. You will need to play this mode many times to collect all the hats.

Several new puzzles have been added to Puzzle Swap. Completed puzzles can be viewed as a slideshow in glasses-free 3D. The new puzzles have “pink” panels, which can only be collected through StreetPass and therefore cannot be bought with Play Coins.

The Mii Plaza also has new “Accomplishments” that can be unlocked, basically the equivalent of Xbox Achievements or PlayStation Trophies. There are currently 78 of them to complete, ranging from meeting a certain number of other Miis to doing things in StreetPass Quest 2.

Furthermore, the Mii Plaza has a new Music Player. You can unlock new music tracks by collecting more hats, among other things.

If you’ve got an avid eye for film-making, the Camera application has received an upgrade. Amongst the new features is 3D Video Recording, which can be played back in glasses-free 3D on the system. Were QR codes not working for you? They’ve also received an improvement, apparently. This is probably for games such as Pushmo that use large QR codes for level sharing.

Got a new 3DS but want to keep your save data, purchases, funds and your Ambassador freebies from your old one? Simply use the new Transfer function and you can make the whole thing a snap.

Nintendo Zone, previously an exclusive download in stores such as Best Buy, is now a mandatory extra. What does it do? Think of a place where you can get special Nintendo news, Club Nintendo features and the promise of game demos in the near future. You had me at “think.”

The Nintendo eShop has also been updated whether you like it or not, you miserable grouch. My favorite feature is the very late inclusion of Download Code support. This means that GameCola should finally be able to receive copies of Nintendo 3DS download titles from publishers, HINT HINT.

This is one big update, and something that has been long overdue. There is still no word on the Game Boy Advance games for the Ambassadors or what the five mystery titles are, though Nintendo recently confirmed that they will be available before the end of the year. With this update out a day early, I get the feeling we’ll hear more about these games very soon.

Locke and Celes order Chinese food... for the last time.