In a move I could have only anticipated in my dreams, Taxman has reworked my favorite Sonic the Hedgehog game for Apple’s various mobile devices. How does it stack up against the original? To be blunt, you have not played Sonic CD until you play this version.

Planets, how do they work?

We may never know, but what definitely works is the game’s new time-travel feature. This is the extra element that sets Sonic CD apart from other Sonic the Hedgehog titles, by actually being good. In my most gracious and humble opinion, no game has yet to better time travel.

The player is no longer simply concerned with finishing each stage by traveling in a straight line. You can now travel back in time to complete objectives that result in achieving a Good Future, if you feel like it. Creating a Good Future for each Act, or collecting all of the Chaos Emeralds Time Stones, results in the Good Ending.

I don’t think I have ever traipsed through the game’s levels so thoroughly until I played this version, through. Testament to the truly spectacular age-old design.

One advantage to being a more modern version of the game is that you can finally choose between either the Japanese or the American soundtracks. Both soundtracks contain looping level audio, courtesy of sound samples extracted from the original game. This feature was planned for the Sega CD version, making the new remake closer to the game’s original intent. 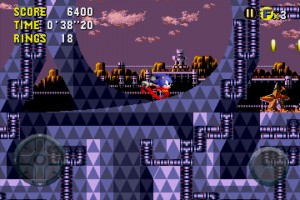 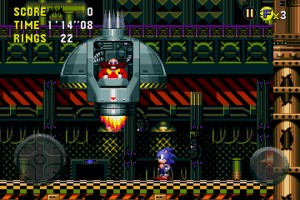 I do have one gripe, though: “Cosmic Eternity” and “Sonic You Can Do Anything” are now instrumental only. This is due to a copyright disaster concerning the use of the lyrics, which could have been cleared up were the original copyright holder only still alive. Why not write new lyrics, or make “Sonic Boom” the main song in both versions? I can live with that if it means not having to hear “Cosmic Eternally” so horrendously butchered.

This rendition of Sonic CD is faster than all of its predecessors, running at what I can only presume to be a solid 60 frames per second. It takes up your whole screen display without stretching, looking incredible through Retina Display. I cannot imagine going back to any other version of the game from now on. I would have never imagined that “perfect” could be made better.

The physics are spot on, too. Even that bizarre “tube” effect has returned, where Sonic goes insanely fast should he even tickle a tunnel of any description. The added Sonic 2-style spindash can be “revved up” to achieve incredible boosts, which makes getting around more exciting than before. The camera has been modified so that it swings back when Sonic is going faster, allowing you to see more of the stage ahead of you. All of the returning sprites are clean, crisp and pop out at you.

Wait, hold back on the fangasm. Let’s find another gripe before I start to sound suspect. I am disappointed with the new sprites for Tails during the Special Zones, which are blatantly horrible. I feel really akward saying this, because whoever penned the new art is probably really proud of their work. On the plus side, the sprites lifted from Sonic 2 do not look out of place, despite my fear that they would. 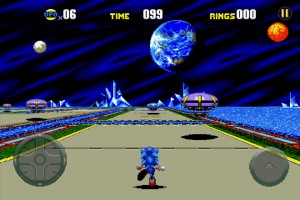 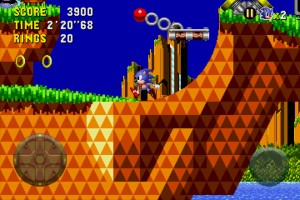 The menus are nicely integrated within the iPhone, with the natural finger-scrolling that you’ve come to expect on the hardware. The in-game interface, though on-screen during the action, does not obscure the play-field too much.

I say grab Sonic CD on iOS devices if you can, unless you’ve got your heart set on the Xbox Live Arcade or PlayStation Network version. That version is a port of Taxman’s engine, resulting in a few little problems here and there. On the plus side, Sonic CD still feels more comfortable when played with a gaming controller, because the on-screen buttons from the iOS version are awkward to use when you’re trying to make the tricky jumps.

I purchased Sonic CD on Xbox Live Arcade and fully completed it twice. I have also purchased the game for iOS devices and beaten that version. I can say, without the tiniest shadow of doubt, that the iOS version is superior. I have also played the iOS version of Sonic CD on an iPad and I was entirely blown aback. There is the added distance between buttons, creating extra space for judging jumps. The game still maintains that perfect synchronized framerate. The graphics take up the whole screen but remain in the correct aspect ratio and still look incredible.

This is an extremely solid remake and the ideal opportunity to return to this classic game. Sega, please let your fans develop more of your games; they seem to know what they’re doing.

Sonic Team, that’s a DOUBLE HINT. Please re-hire Christian Whitehead so that he can add that extra level he was designing. 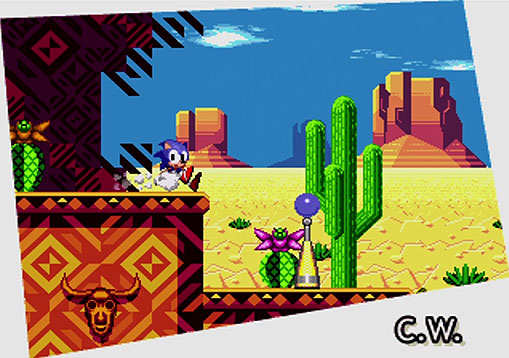 I want to play this level NOW!

I will pay for it! A life-long Sonic the Hedgehog fan demands the lost R2! Release this level in some form and the score for this game goes up.