Having saved the world from ninjas in the most excellent adventure Bad Dudes, Blade and Striker now find that a turtley awesome new challenge awaits them.

With the President saved and the world no longer in peril, Blade and Striker were chilling in their sweet new penthouse in New York City. In a peaceful world, the two dudes of world-renowned badness were free to eat burgers and do as they pleased. One day, they were having an important conversation.

“Striker, do you realize just how bad we are?” said Blade. Striker was quick to reply. “We’re really bad dudes, Blade. Like, really bad, dude. Like, dude, we’re so bad, it’s rad.”

The dude-phone suddenly rang, interrupting their discussion. Striker picked it up. “Yo, dude.” The voice came through on the line, “Dude, you dudes are so bad! You saved the President! WE LOVE YOU DUDES!”

Striker hung up the phone. “Hahaha, we’re always getting calls from fans.” Just as he was saying this, the dude-phone rang again. “I bet that’s another one, now. Dude, like, hello?” he said, picking the dude-phone back up. This time, however, the voice on the other side wasn’t so cheerful.

“You dudes think you’re rad? You’re not bad, you’re not rad, you’re not nothing! If you’re so good at taking down ninjas, why don’t you try some real ninjas?! Some ninja t—”

“Nothing’s going… Why don’t you leave me alone?! You’re always—” 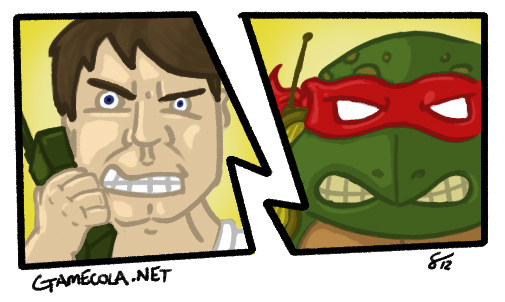 There was a click and the call ended. Striker was obviously distressed by this turn of events. Blade came over to console his friend. “What’s wrong, dude?”

“Like, bad bad, dude. Some dude who thinks he’s bad was questioning the radness of us dudes.”

“Dude! No one can question how rad we bad dudes are. We should teach those punks a lesson! I bet it was some kind of ninja.”

“Dude, it WAS a ninja. He even said so! This is a matter of, like, national security and stuff, dude. Do you remember what happened the last time we heard about ninjas?”

In an effort to protect the President, Blade and Striker duded up in their baddest gear and got ready to head out. Checking the caller-ID on the dude-phone, they saw that the call had come from the sewer. Filled with rage over the thought of some sort of punk sewer-ninja questioning their combined badness, the two smashed through a window and leaped from their 255th-story penthouse suite.

“Dude, I can’t wait to smash some punk ninja face, dude,” Striker said as they were falling.

On the street below them, a construction worker removed a manhole cover and went to pick up his tools. While his back was turned, the two bad dudes dove down into the sewer, opening their parachutes inside and landing with a splash in the water.

“Where are these ninja punks?! Hey! Hey, you!” Blade saw someone up ahead and called out to them. “Are you the unbad non-dude who called us on the phone, dude?! We’re, like, here to teach you a lesson in baddery!” All they saw was a flash of red jump into a pipe and disappear. “Just like a ninja to run and hide. Makes sense for a ninja to live in the sewers. The sewer is, like, the unbaddest of places to live, dude.”

Suddenly, a ninja star flew between the two dudes, cutting a few hairs from their three-day beards. “Just who are you calling unbad, dude?! Ninjas are totally bad!” came a voice from behind.

Blade and Striker spun around to see a figure emerging from the shadows. A giant green beast with a red bandanna revealed itself—clearly a ninja. “You dudes think you’re so bad, but those ninjas you fought were nothing. I bet both you dudes combined couldn’t take me on!”

“What?! Combined?! We’ll show you!” After yelling his retort, Striker jumped on Blade’s shoulders. The two charged, screaming, at the green ninja. Another green ninja came out from another path in the sewer. “Woah, dude, like, cowabunga, man! This is totally gnarly.” This one was wearing an orange bandanna. “Dudes, like calm down! Don’t you want some pizza?”

“Pizza is lame!” shouted Blade, still charging. “Burger are way badder!” The combined badness of the dudes plowed into the red-bandanna-wearing ninja, knocking all three into the sewer water. The brawl continued on for a few moments until a loud voice rang out in the sewer.

The dudes and ninjas all stopped and looked. Standing there in a beam of light from an open manhole stood a giant rat wearing a purple robe.

“That is enough fighting! Stop this nonsense at once! How does one measure the badness of a dude? By the countless others he defeats? In a world such as this, one may win upon the losing of others. Why not, instead, measure one’s badness by the acts of good one might achieve? Surely, in this manner, there will be badness enough for all dudes.”

“Dude, like, maybe he’s right,” Striker admitted. “We’re bad enough dudes because we, like, rescued the President and stuff.”

Blade nodded in agreement. “Yeah, not because we defeated ninjas, dude. Just, like, look at us! Dude, we’re being so unbad right now.”

The green ninja wearing the red bandanna stood up and offered the two a hand. “Master Splinter is right. I can be cool, but I can also be rude. Why don’t you guys have some pizza with us? I’m Raphael.”

Blade and Striker gave each other a high-five as two more green ninjas came out to see what was going on. “Dude, it would be totally bad if we could all have pizza up in our penthouse! Come on! We’ve got burgers and everything!”

Everyone looked at each other and shouted all at once:

This is it. This is the last issue of GameCola to be produced partly in Tabernacle, NJ. By the time you'll have started reading my opening column, Brian Wolf, Matt Gardner, Jenna Ogilvie, Neal Ianno ...