Welcome to “Oh, the Humanity!,” the column that reviews videogame-based books and movies. Today, we are going to discuss the 2009 movie, Professor Layton and the Eternal Diva. This movie was released in Japan shortly after the fourth Professor Layton game. Here’s the weird thing, though: the movie was released in English, shortly before the third game.

I like continuity, so I was one of the few Layton fans who actually waited an extra year and a half before watching the movie. I wanted to see it after playing the fourth game, just like it was originally intended to be experienced.

…Now I kind of wish I hadn’t waited so long. 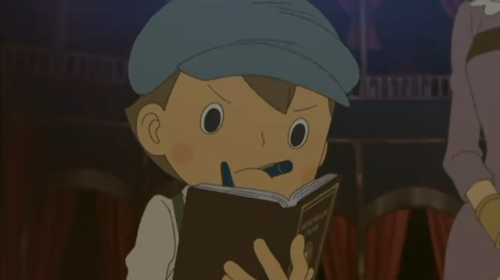 The first thing you’ll probably notice is that half the characters have different voice actors in the movie. That’s one of the unfortunate consequences of releasing the movie before the games; they couldn’t use the same voice actors as the games did, because the games weren’t finished then. So Emmy suddenly sounds thirty years older, and her accent is a lot thicker. The main villain, whose voice is supposed to be recognized immediately, ends up being a complete surprise because we’ve never heard him talk like that before.

On the bright side, though, the movie has a lot of new characters, and they all sound wonderful. I really liked the minor characters in this film. They have actual personalities and backstories. It’s a refreshing change from the game series, where the characters are mainly just props, who have no reason for existence, apart from giving the player some brainteasers to solve.

The plot of the movie is good, I guess. I’ll be honest: I didn’t really like the main plot all that much. The main plot was about an opera singer, whose deceased best friend is now haunting the body of a little girl. And while that sounds interesting, I didn’t really like it. In particular, I found the opera scenes to be rather tiresome. These scenes were not translated at all, so it’s just a few minutes of people singing in Japanese. 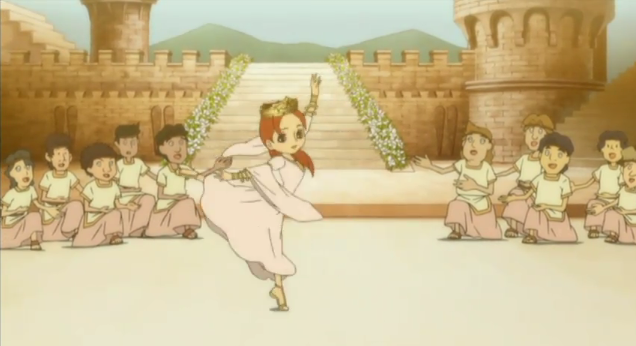 Fans of Japanese opera will probably like this scene.

But my favorite part of the movie is the twenty-minute block which occurs after the opera scene. That’s when the villain holds the entire opera house hostage, and he forces the audience members to play his twisted little game. The rules are simple: solve the puzzles. If you get the right answer, you continue with the game. If you get the wrong answer, you die. The last person alive gets the Elixir of Eternal Life.

…It’s more dramatic when you don’t know that the villain only has four puzzles to solve.

The tension really mounts as more and more people are killed, and I liked the suspense during those scenes. It was really my favorite part of the whole movie. But eventually, the tension and suspense came to an end, when the characters escaped from the giant explosion and landed on a calm desert island.

After that, the movie sort of returned to the main plot about the opera singer, and things got less exciting. Of course, things got exciting again toward the end of the movie, when the main villain was unmasked. Then, the villain started playing dramatic music on the the pipe organ, and he turned the pipe organ into a giant robot. The robot went on a rampage, Professor Layton had a swordfight on top of the robot, and there was more singing in Japanese. Basically, what you’d expect from a Layton movie, seeing as the past two games involved giant robot rampages. 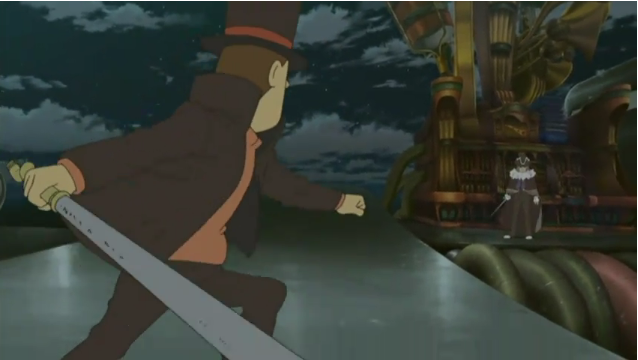 The sword fight on top of the giant robot/pipe organ. See, I wasn’t making it up; that’s actually in the movie.

All in all, I’d say that the movie is probably at the same level as the fourth game: good, but not as good as the third one. People who haven’t played any of the games seem to rate the movie higher than people who have. It’s a decent enough action/adventure anime, and I’d give it a six out of ten.

This game is amazing. Buy it.