I have been waiting since the year 2005 for Sega to port The House of the Dead 4 to home consoles. Does it deliver? Damn straight it does. This is how you port a game. Not this or this or this.

For a game that saw its birth before the Wii was in every home and motion controls ruined the industry, HotD4 does motion control really well. It even holds up well from a graphical standpoint, too. In fact, it’s exactly what I wanted to see.

I didn’t dig House of the Dead 3. Something about the story, visuals, soundtrack, gameplay—something about the whole thing was awry. For the most part, playing through it to get the footage for my video review was a complete slog. It wasn’t awful, just average. I hated on it perhaps more than I should have, but the game rubbed me the wrong way. It ignores everything I love about the first and second installments of the series.

House of the Dead 4 still forgets a lot of things, but the heart seems to be in the right place. No, scratch that. The game is actually the best of the entire series, of the entire franchise. It is so endlessly replayable and contains far greater depth than it simply looks from the surface. 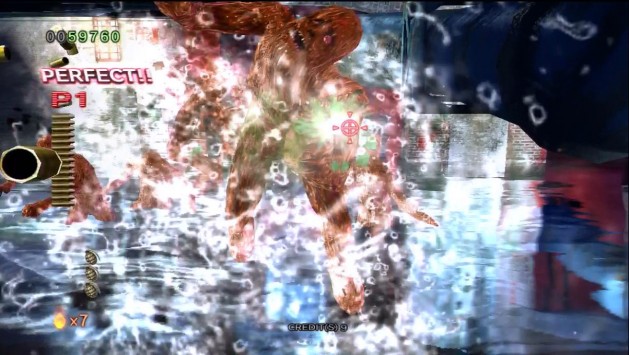 If you came to House of the Dead 4 for the story, you’ll be witnessing the weakest of the bunch. In terms of story content, the plot consists of two halves; one half is a poorly written action movie set in a destroyed city, and the other is a recycled section of House of the Dead 2. In short, the story needs work. A lot of work.

The two playable characters this time around are James Taylor (from the second game) and Kate Green, a character new to the series. I would like Kate a lot more if she didn’t whine about not getting cellphone reception or crying because her favorite shop got ransacked by mutants.

But I’m sure I already like her too much; I always play in the Player 2 slot so I can play as her. Assume her form. BE THE KATE. 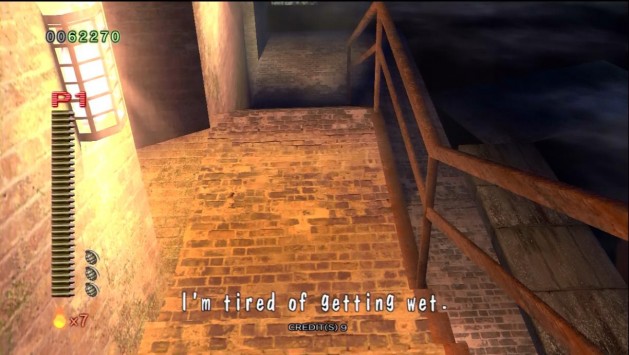 Well I’m pleased that I have that effect on you.

Ahem… Kate clearly has a “soft spot” for James, though. I think it is meant to be subtle, but it stands out as much as a re-used joke does when it appears across multiple reviews. The sexual tension between them is extremely painful to put up with; who would even laugh at the line “Temper this, buddy”? Kate thinks it is funny. I bet she thinks everything James says is hilarious.

What I’m trying to say is, I’m jealous– I mean, oh it’s so out of place! None of the other games have this kind of character relationship; it just threw me off a little. Even how in the “special” mode, she refers to him as someone very dear to her. You might as well have stamped “I LUV JAMES” on her damn forehead. 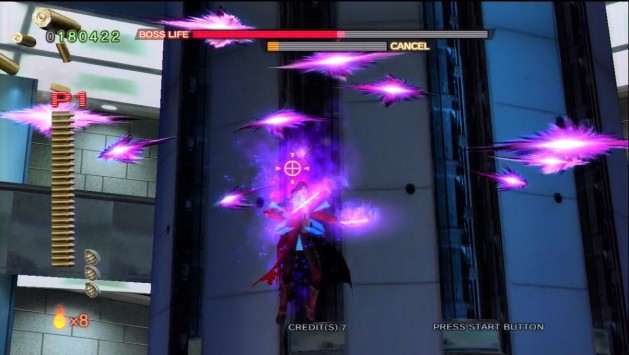 Doesn’t this guy look like the Alchemist from Ninja Gaiden 3?

How Sequels Should Be Done

Basically, where House of the Dead 4‘s story fails is in its heavy borrowing from House of the Dead 2. Thankfully, that’s the only place where the game really falls short of the mark. The story is pants, but the game itself is absolutely fine. The absolute entirety of the package is exactly what I didn’t know I wanted.

The sub-machine gun is far more accurate and it no longer reloads automatically. You often find yourself spraying bullets because it is just so much fun to do so. The mutants come at you faster and thicker, a welcome change as it really ups the ante, something that would not have been possible were it not for the different choice of weapon.

Despite that feeling of speed, you don’t have to rush through the game. If played more slowly and precisely, the whole experience becomes zen-like. Getting those “perfect” grades for killing mutants and racking up your score is just so marvelous in its execution.

There is nothing more satisfying in this game than hearing Kate say, “a score befitting James’ partner” as you manage to get an A Rank on a tough stage.

Although, to be fair, there is nothing more satisfying than hearing Kate speak. Oh, Kate… 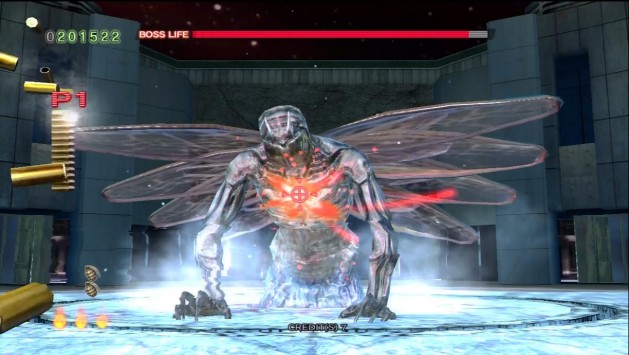 The bosses are really scary shit.

This game could have been made last year, it looks that good. Remember, this game came out in arcades half-way through the ‘Noughties. Sure, there are some odd metallic textures and strange lighting defects here and there, but overall the game maintains the charm and allure of its arcade counterpart.

Or as much of the arcade allure as I can actually remember, seeing as I have only ever played the game once at the Trocadero in London, and only a single credit at that.

You can tell that this game is leagues apart from House of the Dead 3‘s shitty graphics; House of the Dead 4 reminds me of House of the Dead 2 by being more realistic, although the series has never quite figured out how to make faces look human at all. The environments look better, and THANK THE GOD OF VIDEOGAMES that we have multiple routes back in the game. When I mess something up, I want the game to make me go a harder route, something House of the Dead 3 just ignored outright.

If I see a padlock, and shoot if off in enough time, I want to go a different way through the level. Thank you, House of the Dead 4, for letting me do this. Thank you for letting me take out the mutants quickly by cutting the rope of the platform they are standing on. This is why I love you.

The soundtrack impresses me. It isn’t a string of heartless dirges like the third game, instead going for a mix between the second and third game’s styles. It really works to the game’s advantage, and welds the two impressions together to make House of the Dead 4 a game of its own unique form. That sounded posh.

Though seriously the soundtrack has an almost distorted and remixed sound to it, something that perfectly fits the atmosphere. 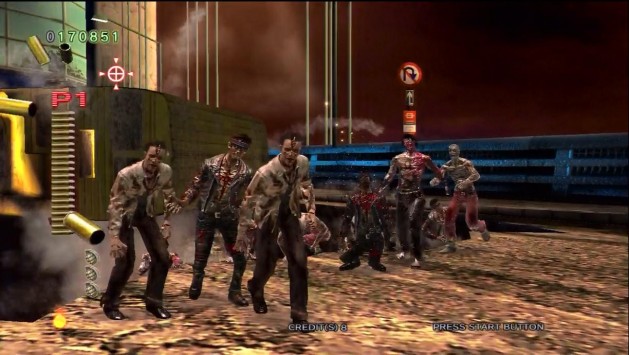 Not much “house” in “House of the Dead,” but I like it better this way anyway.

A version of House of the Dead 4 was released in special arcades around the world, a massive two-screen two-player centered version known as House of the Dead 4: Special. If you ever had the chance to play this at one of its few locations, you were extremely lucky. This arcade machine had it all; the graphics were pumped through DVI, which is like better than HD quality.

When Sega confirmed that House of the Dead 4 was coming to consoles, I didn’t expect them to go ahead and include House of the Dead 4: Special in the whole package! I was expecting Sega to pull a Capcom, by having us pay for the chapter later as downloadable content, but no.

Sega included this chapter for free. This deserves my undying respect. I have always, always wanted to play this version of the game, and now I can. In my own home, none the less.

I applaud you, Sega. You can’t see it, but I am typing with one hand right now whilst saluting with the other!

Wherever this series chooses to head in terms of future arcade titles, I have a renewed belief that Sega can bring the franchise further justice. In the meantime, a PS3 port of The Loving Deads: House of the Dead EX wouldn’t go amiss. Or alternatively, you could send me a signed centerfold of Kate Green. 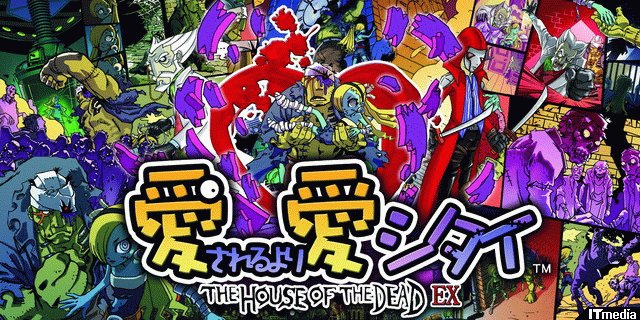 Pretty please, Sega, with a cherry on top?

Howdy folks. Thanks for posting this article. I know I'm no longer around to provide you with your WTC needs, but I wanted to write a review on a game that really deserves a closer look. Let me firs