Cherry Tree High Comedy Club is a very creative game, with a unique premise and never-before-seen gameplay and…

Ah, who am I kidding? It’s Harvest Moon, without the farming.

That’s not necessarily a bad thing, though. Back when I played Harvest Moon, I always skipped the farming parts. Instead, I focused on the parts where you try to get girls to marry you. That’s because I was in high school at the time, and my character in the game had a much more interesting romance life than I did.

In my defense, I tried using Harvest Moon romance skills in real life, but it never worked. For example, when I was wooing the pink-haired girl next door, I gave her a handful of sticks. She just thought I was weird. And when I gave her spa-boiled eggs, she threw them at me. Harvest Moon, how could you fail me so? 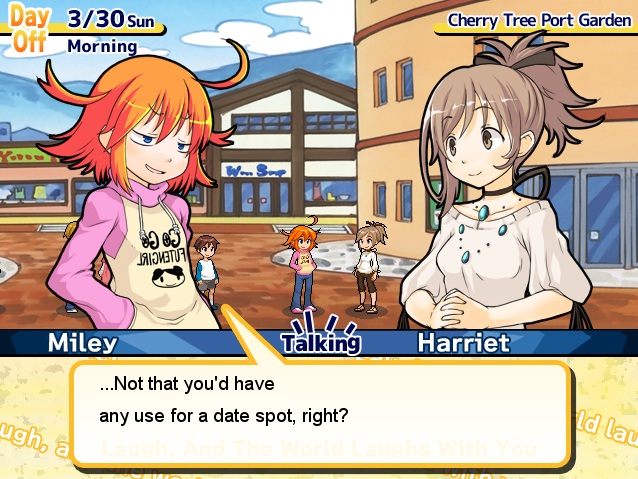 Where was I? Right, Cherry Tree High Comedy Club. In this game, you want to win the affections of at least three people in the town. You win their affection by spending time with them, and talking to them about various things, especially the things they’re interested in. For example, if I’m trying to get the attention of Cindy, the punk musician, it would be helpful if I had my character listen to a few CDs.

Sound familiar? It’s basically the same as the marriage system in Harvest Moon, only your goal is to get all six people to like you, not just one. Of course, our hero isn’t trying to get married; she’s just trying to make friends with the people in town. But the game still comes off a little bit like Harvest Moon: Polygamy Edition.

Each character you’re trying to make friends with has their own personality and backstory. Whenever you reach another “friendship level” with a person, you see a cutscene where you learn more about them. And of course, there are general cutscenes that affect the whole town, in addition to the character-specific cutscenes. Cutscenes and dialogue make up the bulk of this game, and it is all quite well-translated from the original Japanese.

Actually…I checked the Internet just now, and it says that this sort of game set-up is pretty standard for dating sims, rather than something specific to Harvest Moon. My mistake. I’ve never played a dating sim before, so I didn’t know that. Like I said, I played Harvest Moon in high school so I could vicariously have a dating life, but now that I’m old enough to date in real life, dating sims seem kind of…pathetic. And depressing, when I realize my videogame self gets more dates than I do.

Oh, who am I kidding? If my videogame self goes on a date, that counts as going on more dates than I do. Are you happy now, review? You’ve managed to make me look pathetic. And now everyone thinks I have issues. I do, of course, but it’s still not nice to bring them up. 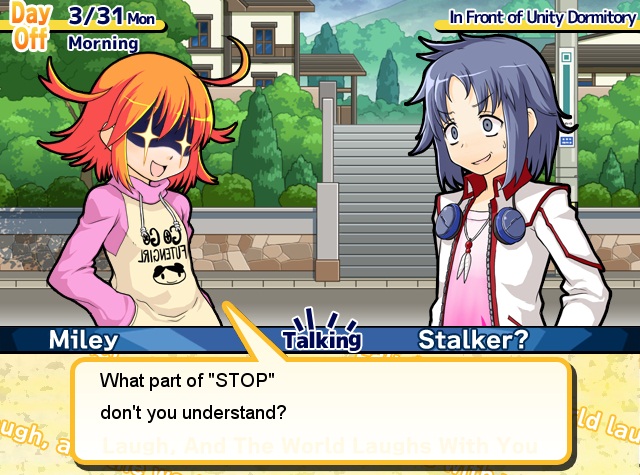 Pictured here: How most girls saw me, during college.

The music for the game was fine, although it really could have used more variety. You’ll hear the same two or three songs over and over again, and it’s always blaringly obvious when the sound loop restarts.

What really shocked me about the game were the controls. The controls are two buttons, “X” and “C”, along with the arrow keys. That’s it. Clicking on the screen with the mouse doesn’t do anything. It was incredibly counter-intuitive. I kept wanting to click on characters to start conversations. Why are there no mouse controls in a 2012 PC game? It’s like a Wii game that completely ignores the Wii-mote and makes you use the nunchuck as a controller.

The main selling point of the game is the translation. It’s consistently good and funny. The main character, Miley, likes to wisecrack a lot, and she never comes across as boring or annoying. The other characters are fine, as well, although Miley tends to stand out as the most interesting one. 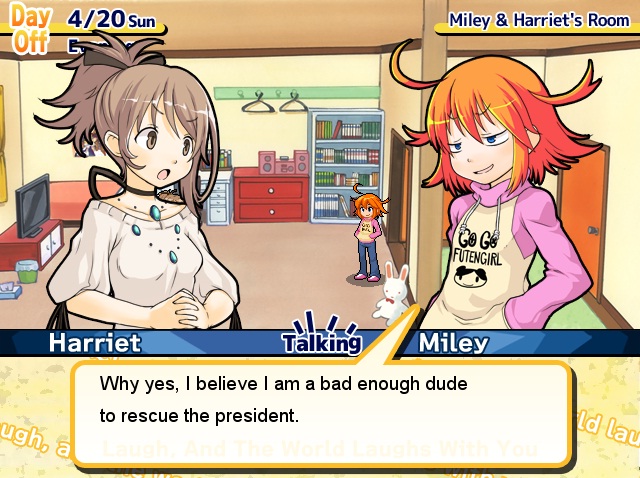 Then we can go get some burgers! Ha ha ha!

All in all, it’s a nice little dating sim, with plenty of dialogue and NPCs to keep you going for a while. Each playthrough takes about two hours, and the game carries over some information from playthrough to playthrough. There is no “skip dialogue” option when you replay the game, though, which is kind of a bummer.

Now for the million-dollar question that everyone has been wondering: Do I like this game more, or less, than Harvest Moon? I think I’ll go ahead and say they’re pretty much equal. This game has more along the lines of cutscenes and dialogue; Harvest Moon has more gameplay which isn’t just pure dating sim material. Neither game seems to have a really strong edge over the other, as far as dating sims go. They’re both good.

Horses, Tom had quickly learned, are idiots. From a young age they are apparently tempted to wander into the most precarious places imaginable, such as jagged mountain passes, valleys filled with ragi