Rock Band has been the only rhythm action game I’ve played during the last month, other than a short-lived stab at Guitar Hero III and GH: Smash Hits (getting Expert songs done on those games is like getting a stone to shed blood). And all I’ve played these last four weeks is the dreadful Band Tour Mode. It gets under your skin and causes great irritance.

Lest my anger not discredit the things Rock Band did—it invented the band gameplay that was stolen by Neversoft for Guitar Hero World Tour and it has that gorgeous visual style (a cross between Pixar and anime). It certainly looks much better than Guitar Hero III (which it went head-to-head with) and every Hero game since. But Rock Band offers forth its evil Band Tour Mode, which is my biggest hate in the whole of music gaming. It sure as hell recreates the effect of being in an actual band, including the arguments and fights that come with the package that are advertised only in the small print. The amount of times I fell out with my fellow guitarist whilst playing this mode is easily in the double figures. Disagreements over all kinds of things turning into heated arguments whilst our fingers scrambled across the plastic fretboards of our guitar peripherals.

Thanks to Harmonix creating this mode, every Guitar Hero and Rock Band has followed suit since. Why? What was wrong with playing five or six songs, then going to another venue? What was so wrong with that so we had to change EVERYTHING? The soundtrack does have some truly great musical choices, though. The game is worth buying on songs alone, unless you want to import the songs into Rock Band 2, in which case you might get away with just renting it once and paying the one-off export fee, I’m not sure. We’ve got Aerosmith, Foo Fighters, Garbage, Queens of the Stone Age, Hole and Kiss on the soundtrack. There are some truly remarkable and memorable head-bobbing classics here and there, plus Coheed and Cambria’s “Welcome Home,” which is nothing short of amazing. But there is ONE problem with the soundtrack.

There’s only fifty-eight songs. Now I know what you’re thinking, “That’s not to be sniffed at! There’s plenty of songs there that everyone can enjoy,” and you’re quite right. But in Band Tour Mode, you realise just how small a selection of songs there is, especially when the game effectively whittles it down to twenty-eight songs. Then, the same songs appear multiple times in the same sodding venue, too. What could have been a simple and exciting mode is ruined by its reliance on making you play “Cherub Rock” every five minutes. 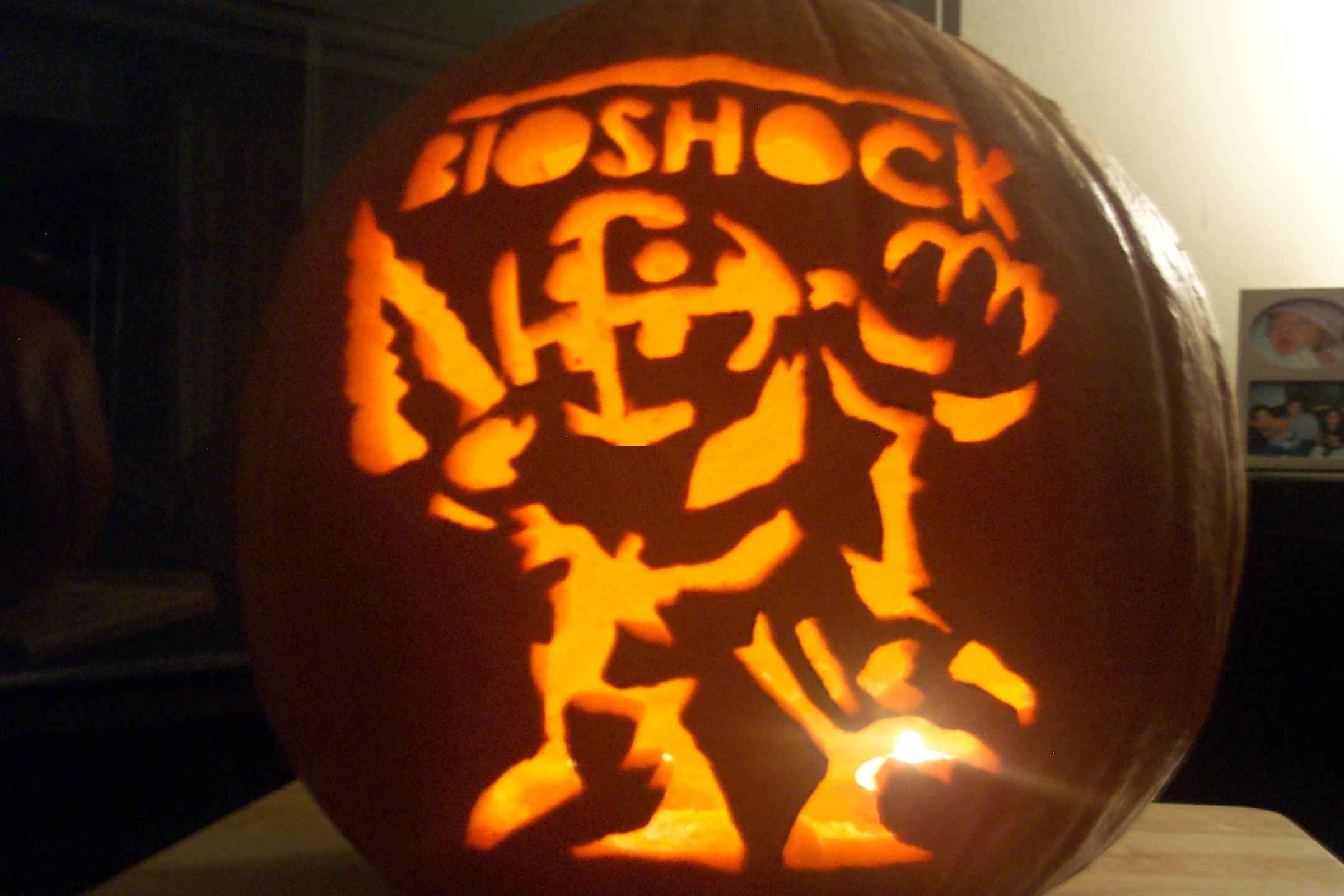 If you haven’t bought any downloadable content for Rock Band then you’re gonna be bored out of your whole freaking skull. Save the “Make A Setlist” shows for when you’ve lost the will to live—it’s stunning what a little Lady Gaga can do to pick you back up from a truly boring five hours playing “Enter Sandman” and “Green Grass and High Tides” fifteen times. Both of those are awesome songs, but having played them over and over has very much ruined them for me. Somehow, my love for “Train Kept A-Rollin'” by Aerosmith and Kiss’ “Detroit Rock City” has grown the more I’ve played them. Odd considering the oversaturation of the others has caused me to hate them.

The “Mystery Setlist” shows will pick random songs from all of your on-disc songs and downloadable content, so the game will often deliberately screw you over by picking “Green Grass and High Tides” as some kind of pissing joke.

Whoever thought it was a great idea to force you to play the same fifty-eight on-disc songs a million-kajillion times to complete the tour is an absolute fucking sadist.

Once you start unlocking the later venues, feast your eyes on the shows that range from ten songs to eighteen songs, EACH. Then there’s the stonker, the “Endless Setlist,” where you have to play every song in the game back-to-back. WHAT WERE THEY THINKING? HONESTLY?

The “Endless Setlist” isn’t too bad. You can pause for a break every now and again, and you can retry a song if you fail. Harmonix realised this wasn’t cruel enough so they added an Achievement for Rock Band 2‘s endless setlist which takes those basic amenities away from you too, oh, and it’s a little bit longer in Rock Band 2.

There are other modes too. Going alone rather than in a band provides you with a more Guitar Hero-esque mode where you complete five songs then move onto the next venue. There’s no necessity to sit around for five songs in a row, as you can tackle them in any order and save your progress at any time between songs. This is the last game to run under this system—as Neversoft thought it was a good idea to scrap this mode, and Harmonix followed suit. 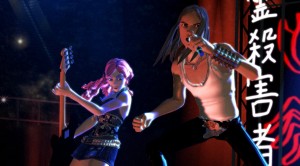 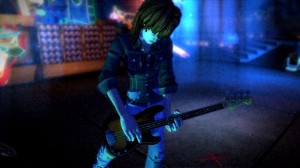 The band gameplay introduced in Rock Band means you can play electric guitar, bass guitar, vocals and drums. The bass guitar gets no love as it is the only instrument not to be given its own career path, which is totally fail as I love bass. Like I mentioned in my Beatles: Rock Band review, the instruments are wired unless you’re playing with the Rock Band 2 instruments, Guitar Hero World Tour or Guitar Hero 3 wireless guitars, or the Microsoft Wireless Microphone. Playing with all wired peripherals requires the use of a USB hub, the likes of which that comes with the band-in-a-box (but that one needs an AC adaptor and sucks).

I used to play a lot of the multiplayer with my brother, one of my friends and my ex-girlfriend. It was a lot of fun. Without a full band, this game is a lot less fun. I miss those days—playing in a two member band just caused arguments. But it was fun too, I guess.

Besides the single player and band modes, Rock Band also has online multiplayer, in both a band and against other players with the same instrument.

All in all, Rock Band is a sturdy music game, but if you’re going for the sweet-as-cherry-pie 100% Achievements then you’re going to be playing the same songs over and over like nobody’s business. The Achievements aren’t hard if you can play respectably on the instruments, just time consuming. Except for Expert Drum Career; best of luck with that one, dear old chap. Tour Mode takes far too long: fully completing it means at least fifty hours are required from you and the rest of your band ensemble as you play the same inane mundane moondance moonshine bullshit. You’ll have had enough of “Suffer”agette City and want to smash the game disc into tiny fucking pieces by the time you’ve finished. But as a game, it does what it does well. I can’t hate it.

I don’t want to give Rock Band a high score. I want to give it a low score. I want to tell you to boycott it. But I can’t lie to you. I’m just raging at being such a serious gamer that I’ve wasted hours of my life playing the same songs over and over for stupid little Achievements. My hate aside, Rock Band is a respectable music game that introduces band gameplay, and what it does well is also in a very, very vast quantity, that’s all. It invented a lot, and for that I both love and despise it.

I suppose the original Rock Band is like a webcomic. It just isn’t going anywhere. Save your money for the far superior Rock Band 2 and the upcoming Rock Band 3.

You remember that classic Flash animation BADGER BADGER BADGER? Apparently, that's a thing that you can own the rights to, and somebody does. And now that somebody is making a game about it and other