In a recent review, I mentioned that Law & Order Legacies: Episode 1 is available for free on the iPad. I’m not a fan of Law & Order, but free is free. Let’s see if the game is any good, shall we? 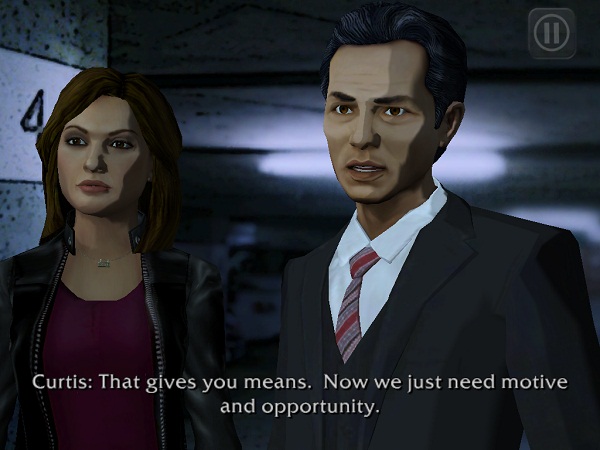 I guess I should start by saying why I’m not a big fan of the Law & Order TV series. It’s simple, really: I can’t tell the difference between any of the characters. They all talk in the same “detached police officer” voice. Plus, no character ever talks for more than two sentences without being interrupted. These cops are constantly finishing each other’s sentences; it’s almost like the precinct is holding a snappy dialogue contest, and they don’t want anyone else to get an edge in the competition.

That’s the impression I had of the series, before coming into this game. The game followed along with my impressions. The officers were all rather stoic, and they could not stop trying to one-up each other in the snappy dialogue competition. So I’m going to say that what happens in the game is a pretty good reflection of what happens in the show. 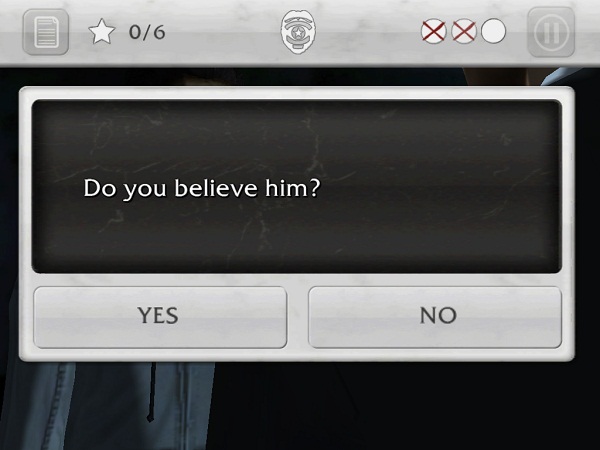 The game features Rey Curtis and Olivia Benson, who are characters from two different decades and Law & Order series. They’ve teamed up to solve the murder of a hotel maid. They investigate one crime scene, and they question five people before arresting the culprit. That’s the first half of the game.

The crime scene investigation is pretty basic. There are four pieces of evidence you have to find at the scene of the murder, spread out over a few screens. Move between the screens and pick up the items when you see them. It’s a standard hidden objects challenge, one which was made unnecessarily complicated by odd touchscreen controls. In any case, three of the items you need to find are in plain sight, so it shouldn’t take more than two minutes to get through this section.

The rest of the investigation is questioning suspects. This is mainly just going through dialogue trees. Scratch that; it is just going through dialogue trees. Picking conversation topics makes up 90% of the gameplay here. Playing the game is basically the same as watching an episode of the TV show, except every minute or so, you need to tap to get the scene to continue.

They try to make the dialogue tree mechanic more interesting, but it doesn’t really work. For example, there are red herring topics, and you’re warned to stay away from them. However, when you pick a red herring topic, nothing bad happens; the game just continues like normal. Other times, the game will ask you star questions. If you get them right, you get a star. If you get them wrong…again, nothing bad happens. The game continues as normal. You can replay each interrogation as often as you want, in order to get all the stars, but there’s no real reward for doing so.

In addition to the star questions which don’t change the game, each scene has three real questions you have to answer. These are the only ones you need to look out for; the meter for them is in the upper right. Get all three wrong, and you have to replay the scene again from the beginning. It’s really hard to get all three wrong, though, because they’re simple yes or no questions. 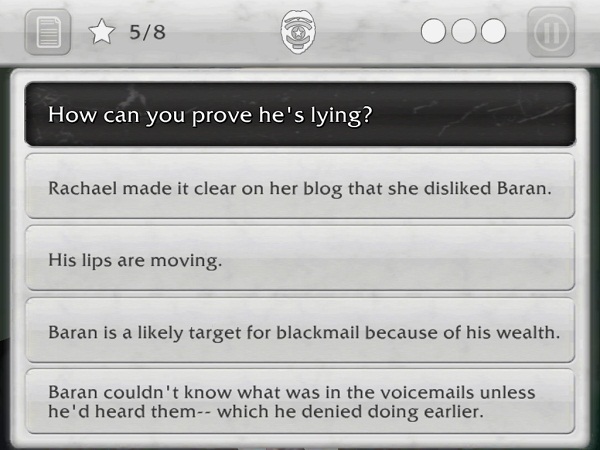 The second half of the game is the trial. The trial has three witnesses, who get interviewed by both the prosecution and the defense. You’re the prosecutor, and when you question witnesses, it is exactly the same as going through the dialogue trees during the investigation.

When the defense questions witnesses, the game pauses after every statement to let you decide whether or not to raise an objection. You need to clarify which type of objection you want to raise: heresay, badgering, speculation, or lack of experience. There is a “scales of justice” meter at the top of the screen, which tracks your progress. If you make bad objections, the scales tip in favor of the defense.

At the end of the trial is a plea bargain. If you’ve been doing a good job in the trial, you can go for a heavy sentence in the plea bargain. If you’ve been doing a bad job, the criminal gets a lesser sentence. Either way, he’s going to serve at least some jail time for murder, and you’ll get the satisfaction of knowing that justice has been served. 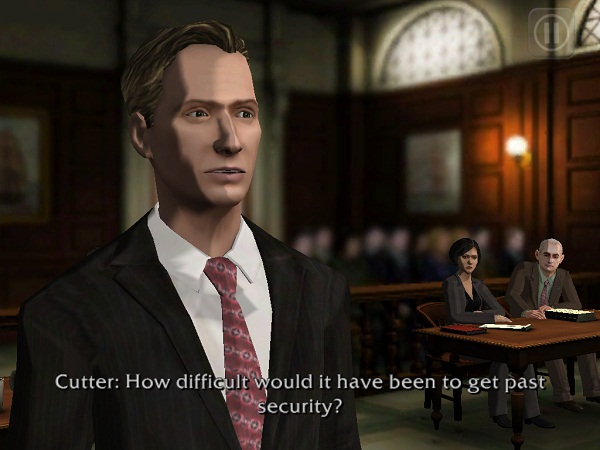 That’s basically how the game works. The first half is investigation, which is just dialogue trees. The second half is courtroom trial, which is…just dialogue trees. Overall, I get the sense that the game is geared toward very casual gamers, who just want to have fun playing through an episode of the TV show. It is not aimed toward people who want a challenging gameplay experience; you can get through the game just fine without even putting that much effort into answering questions correctly.

And yeah, if all you want to do is play through an episode of the show, then get this game. It does a good job of feeling like an episode of the actual TV show. The plot moves along well, the dialogue is snappy, and it stars the characters you know and love. Fans of the show will most likely eat this game up. Non-fans like me will find it moderately entertaining, just not from a gameplay standpoint. 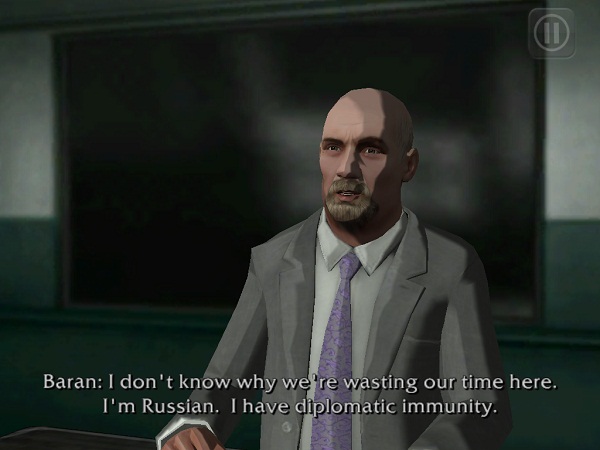 Two more things before I finish. First, why doesn’t this game have achievements? I want achievement points for this game. That’d give me motivation to at least try to answer the various questions correctly.

Second, the game is short, even by Telltale Games’ standards. I actually took a moment to do the math here. The entire Law & Order Legacies series is about the same length as Back to the Future: The Game. However, because Law & Order Legacies has seven episodes, not five, that means each individual episode is shorter. Oh dear. Why can’t more episodes mean more gameplay? Instead, in this case, more episodes means each episode barely pushes past an hour. Less, if you’re rushing or you know the plot ahead of time.

All in all, Law & Order Legacies: Episode 1 is not at all bad for a free iPad game. There are certainly many worse games you could get. I’d recommend at least checking it out. Why not? It’s free.