I think the best word that describes this game is intense. It starts off with terrorists attacking major landmarks around the world, and the pressure stays on for most of the remainder of the game. There are nightmare sequences, bloody murders and the occasional R-rated word. It’s all very exciting. 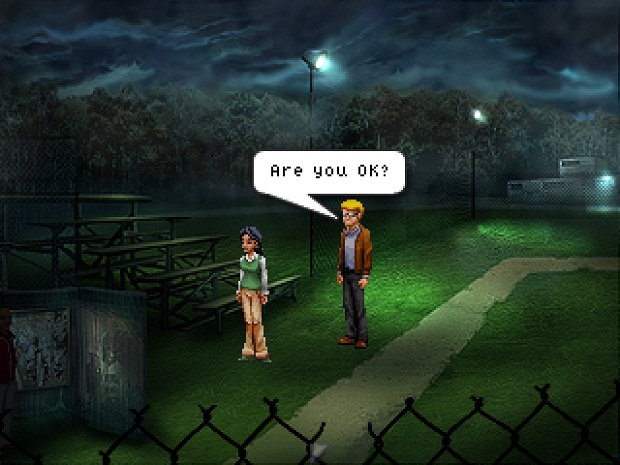 The game has four different main characters. At the beginning, they’re all separated, and each character gets their own one-room introductory puzzle. This is the slowest part of the game. Eventually, their separate plotlines collide, and the characters meet each other. At this point, the gameplay gets much more exciting, and you can start to switch between characters to solve puzzles in various locations.

One of the characters is voiced by Logan Cunningham, the amazing narrator from Bastion. He plays Detective Bennett, a gritty cop who plays by his own rules. It’s a good thing he played a policeman in this game, otherwise he’d be arrested for robbery. Why? He stole every single scene that he was in. It didn’t take long before I pushed aside the other characters and tried to have Detective Bennett solve all the puzzles by himself.

The other characters are all fine, and they carry the game well. The various background characters who only have 5-10 lines of dialogue are all pretty much forgettable, except for one named Ozzy who hides behind a curtain in his cubicle. He was refreshingly strange and funny, considering that the rest of the game is overly serious and contains little humor apart from the chemistry between the main characters.

The puzzles are standard adventure game fare, with one or two tougher logic puzzles thrown in for additional challenge. I understand that some puzzles even have multiple solutions, and some are optional. I managed to solve 92% of the puzzles—there’s a meter that keeps track of this in the upper/right corner—and I kind of want to replay the game, just so I can solve the puzzles I missed. Perhaps, like Curse of Monkey Island, this game could have a Mega Monkey Mode where the challenge is increased by making all the optional puzzles into mandatory puzzles. 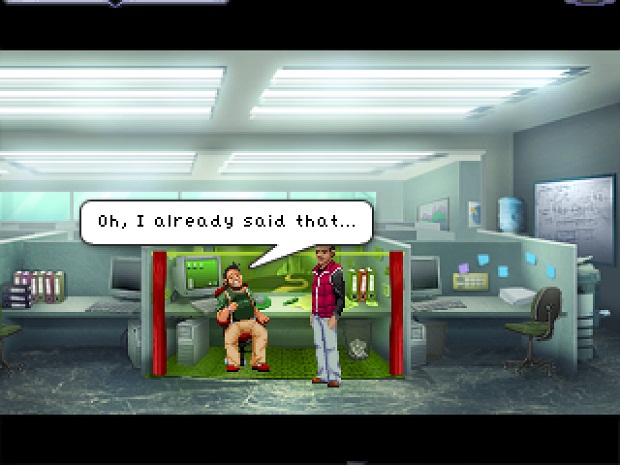 Now for the element of the game that every single review is going to complain about. This game has a “short term memory” feature which is kind of clunky and takes some getting used to. Its basic function is to serve as a conversation topic menu, and you can drag things to and from the menu to talk about them in conversation.

Let me give you an example. In one puzzle, Anna drops a coin, and Ed picks it up. This is a really simple puzzle; all you have to do is talk to Anna about the coin. You can solve this puzzle in one of two ways.

As you can see, doing things through the short term memory feature can get somewhat clunky. Once you get used to it, it works smoothly, but it definitely takes some getting used to. It’d be much easier if this wasn’t a puzzle, though. I’d prefer it if Ed could simply talk to Anna, and a dialogue option about the coin automatically appeared, without me having to play around with short term memory.

Another complaint I have is that some of the smaller plot points don’t get resolved. I still had four or five unanswered questions by the time I reached the somber ending. For example, at one point in the game, Detective Bennett drops a letter. The letter says something along the lines of “Don’t trust Character X.” Naturally, Character X picks up the letter, reads it, and is completely shocked. And…the plotline ends there. The letter never gets mentioned again, and the two characters act like nothing ever happened. What’s that all about?

[Editor’s note: Wadjet Eye founder Dave Gilbert had this clarification for us: “You actually CAN find out about that letter. It’s optional, but there.”] 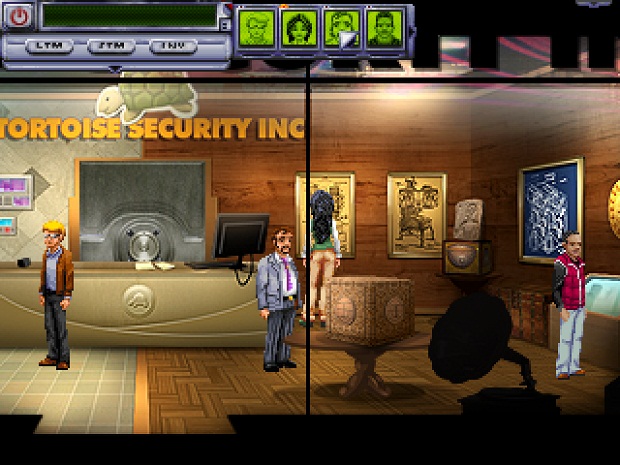 All in all, Resonance is a good game. It’s a little slow at points, and the short term memory feature is odd. But the plot picks up quickly, and when it does, it becomes completely solid and intense. Plus, Detective Bennett pretty much makes this game exciting. Fans of Gemini Rue and other games by these developers will probably like this game, too.

But hey, don’t take my word for it. Play the game yourself, by winning a free copy of it today! That’s right, GameCola has a free copy of this game, which you can download on Steam, and we’re giving it away to one lucky reader!

The contest rules are simple. In this game, the four main characters are a scientist, a nurse, a cop and a reporter. If you had to save the world in a sci-fi game, what job would you want to have? Leave a comment with your answer, and we’ll pick a winner on July 1st.