Should Sackboy be given the sack?

fan of LittleBigPlanet. That game has an extremely high level of customization and creative control. The series focuses on the create, play, share motto, which means that the game is designed to be intuitive and friendly, with tools that allow you to create content you can share with everyone else in the world.

That’s what this is, pretty much. ModNation Racers with a LittleBigPlanet skin applied to it. By no means a bad idea on paper, but in its execution it feels poorly made and is riddled with bugs and faults.

I understand that this is a prototype version, and when the game comes out later this year things may be better. But they won’t be better unless enough people point them out, so here I go. 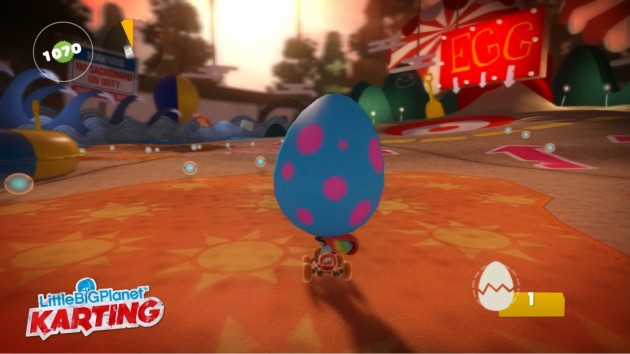 The first thing that really bugged me was the controls. There are two schemes—I like to call them the Mario Kart scheme and the Burnout scheme. The Mario Kart scheme has acceleration on the X face button, and is clearly the most comfortable. The second scheme, the Burnout scheme, has acceleration on the R2 trigger. I’m going to be very honest—the second control scheme is uncomfortable, and the game is almost completely unplayable this way. This is because the trigger on a PlayStation 3 controller is awkwardly shaped and you can never be sure how hard you’re putting the foot down on the pedal.

You can collect weapons, but they’re not very effective. Each of them has terrible aim or awkward arching movements that make them unusable in a heated arena battle. You have the ability to protect yourself from oncoming attacks by firing your weapons backwards, but the timing for this is tricky and several times it didn’t work—I fired my weapon forwards and was then decimated by the attack from behind.

The predictable logic of these attacks irritates me. As I find myself reaching the goal in 1st or 2nd place, I am hit by an enemy attack I couldn’t avoid and land the end of the race in 7th or 8th place.

This happened so often that I’m pretty sure it is meant to be this way. You can turn the difficulty down to the condescending Casual difficulty, with the tagline “everyone’s a winner.” They might as well put your Sackboy in a diaper and give him a pacifier because they’re outright telling you the mode is for babies. 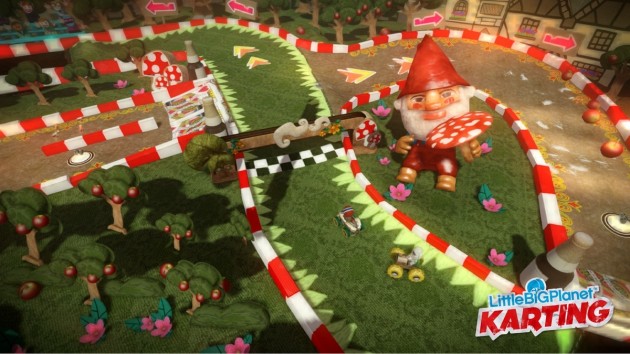 You GNOME it makes sense.

The creation tools need a serious amount of work. They are almost entirely lifted from ModNation Racers and are just as difficult to get to grips with as they were there. There are a lot of tools to use, all of which are alienating and confusing. Gone are the interactive tutorials; instead you now have videos that tell you every little bit of what you actually want to know.

Stephen Fry is back as the narrator, but he is overacting this time. Also, the script is clearly written in a different tone, almost as though it is a parody of the LittleBigPlanet narration. This is likely the result of United Front Games not grasping the feel and atmosphere of LittleBigPlanet when writing the script. Phrases like “sack-tushie” seem completely out of place, and even adding words like “bally” in sentences was cute in the first game but isn’t now.

The music selection in the beta is quite small, no doubt just enough to tantalize the earbuds. It is good to know that there will be good music included, as the beta has an Anamanaguchi track available. This reminds me of the amazing soundtrack to LittleBigPlanet and LittleBigPlanet 2, and leaves me hopeful for more of that excellent eclectic otherworldly music selection.

The online gameplay works pretty smooth and I had no issues with lag or slow-down. However, it did take several minutes to start a match and to find players. Once you’ve played a race, you can stay and vote on another course, allowing you to jump into rematches without having to find new players. 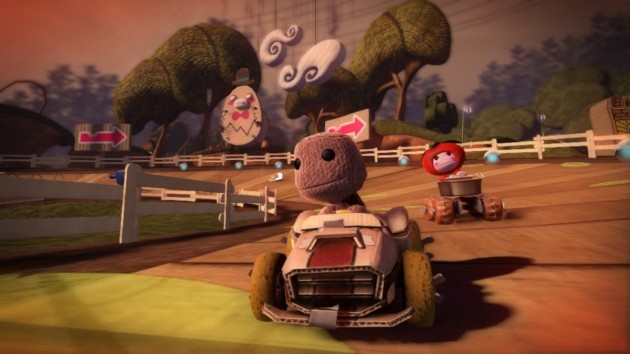 In their de-FENCE, it sure looks great so far!

When editing fences of the race track, the PS3 is prone to freezing. This has happened to me three times so far. I was forced to save regularly if I didn’t want to lose any work. This needs to be fixed before the game is released, but I have no doubt that it will be.

Something that would take minutes to create in LittleBigPlanet 2 takes a lifetime to craft in LittleBigPlanet Karting. All the tools are there but they seem to be very complicated to use. But creating something like a track, or a battle arena is very easy to do and it is playable within minutes.

I had a look online and managed to find some very complicated and well-made user-generated content, so I’m sure that it will become easier to create something decent the more I dick about with the tools.

I have faith that this game will be very good when it is released. I hope that all issues will be ironed out. I estimate that the full game will be an 8 out of 10, should they swat those awful bugs and make the create mode more user friendly. As for rating the beta itself, that feels kind of pointless, so I’m just going to chicken out of having to think and give it a better-than-average score.

I look forward to the release of LittleBigPlanet Karting and remain hopeful that the final product will be truly amazing.

Better than actual Monopoly if only for the fact that the game is done in under an hour.