I got SNK Arcade Classics Vol. 1 after Christmas, as my family had effectively streamlined the entire Judeo-Christian holiday macrocosm into a small series of virtual currency transactions and I found it on Amazon.com for $11.99 brand new. It was small consolation for having to endure Christmas dinner over Skype (with a fuckin’ e-turkey, no less), where my family’s interesting dichotomatic dependence on technology for ease of communication combined with an award-winning, hyperbolic incompetence for how to use any of it resulted in us losing our shared $36.7 million inheritance from the Grandmama to the NAACP and NAMBLA, discovering my identical twin cousin had been secretly heterosexual for the last two years, throwing off the Earth’s geomagnetic field because my dog can’t go five minutes without masturbating, misdirecting the 2.4 GHz frequency bands into a single point of collaborative space, constructing a sentient butt bubble that we worshiped as a god, erasing by proxy the quantum time continuum that held the BACK TO THE FUTURE movies (yeah, talk about irony), and learning completely by accident, through a poorly muted side conversation with his proctologist/lover, that my uncle’s anal cancer was being caused by their shared double-dildo, which we immediately arranged a shotgun wedding for between it and the butt bubble because they were already six months pregnant.

Jesus was rolling in his grave. 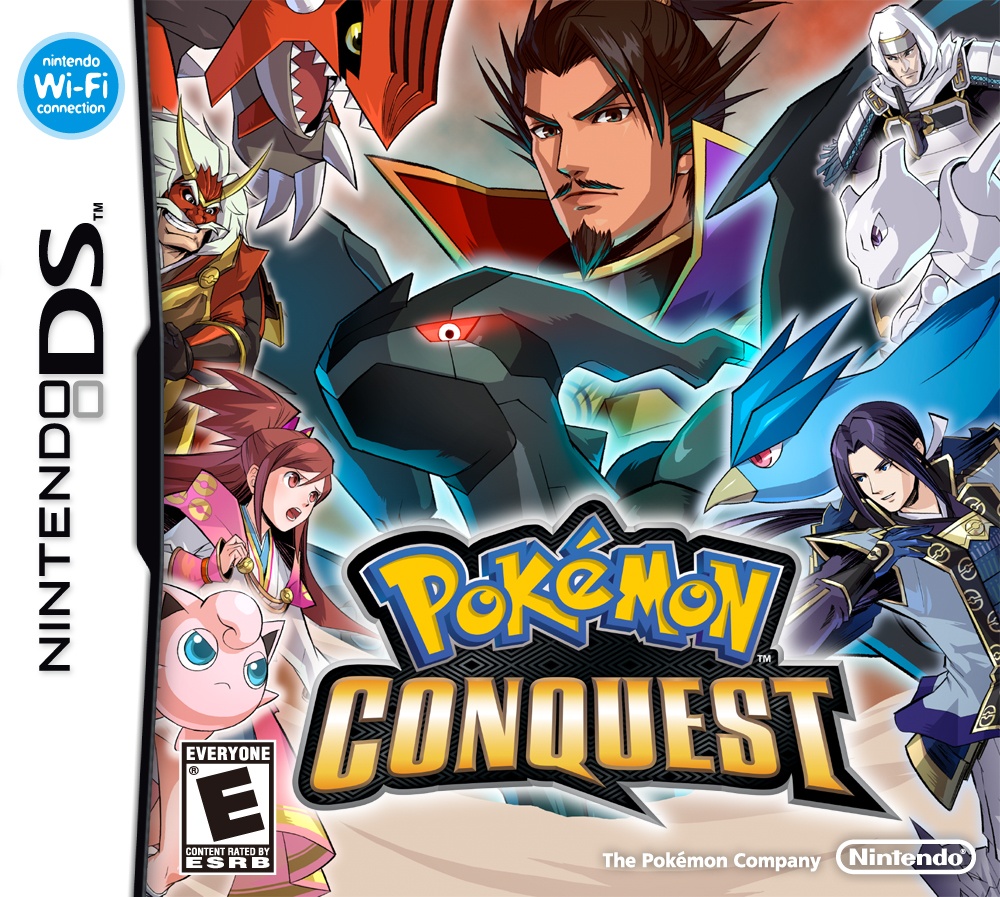 But once the sting of that trauma faded away (I lie; it’s a pain that grows more and more every day until I wake up every morning screaming), I found the small consolation wasn’t a bad purchase, at least for that price. Shoveling a bunch of ROMs onto a DVD disc with a shitty museum-themed hub and some bonus stuff, which was already sitting in the company vault doing nothing, is such an easy way to put out games people actually want to play and buy I’m seriously surprised more companies aren’t doing it (still waiting for my Castlevania Collection, Konami).

SNK is certainly something that benefits from a cheap little disc like this. Raise your hand if you remember the Neo-Geo. OK, now raise your hand if you remember the system itself and not its infamous place in game history or its borderline racist meme of “Hi I am from Brazil, do you have Neo Geo ROMs, por favor?” Since I can’t actually see you, this exercise is pointless and we will move on as though I have a class full of ignorant racists anyway—basically, the Neo-Geo was an interesting system, to say the least. It was developed by SNK and more than half of its 156 game library was developed by them, for them (…huh?). It started out as a multi-ROM arcade cabinet to be shipped to Ohio bowling alleys, dank subterranean bars, and this one place in my town that used to be a really creepy arcade that I was the only person who ever went in. Then they started getting reports that some people were actually willing to buy the consoles for $650 a pop, so guess what started coming out.

Now, wrap your head around this—a $650 arcade machine that doubles as a home console, with games upwards of $300 each, in 1990 for Godssakes, somehow developed a huge cult following. How? The quality of the games. The quality of the motherfuckin’ games. Those games were pure J-fap—wild action, lots of fighting, fast, fast, fast, burning sensations, guns and bullets going everywhere—basically like the first time I ever had sex, with the exception that it was worth looking at. Say what you want, but Neo-Geo packed some AMAZING graphics that wouldn’t be rivaled again until 2000, not to mention a killer class of gaming and series that survive today. 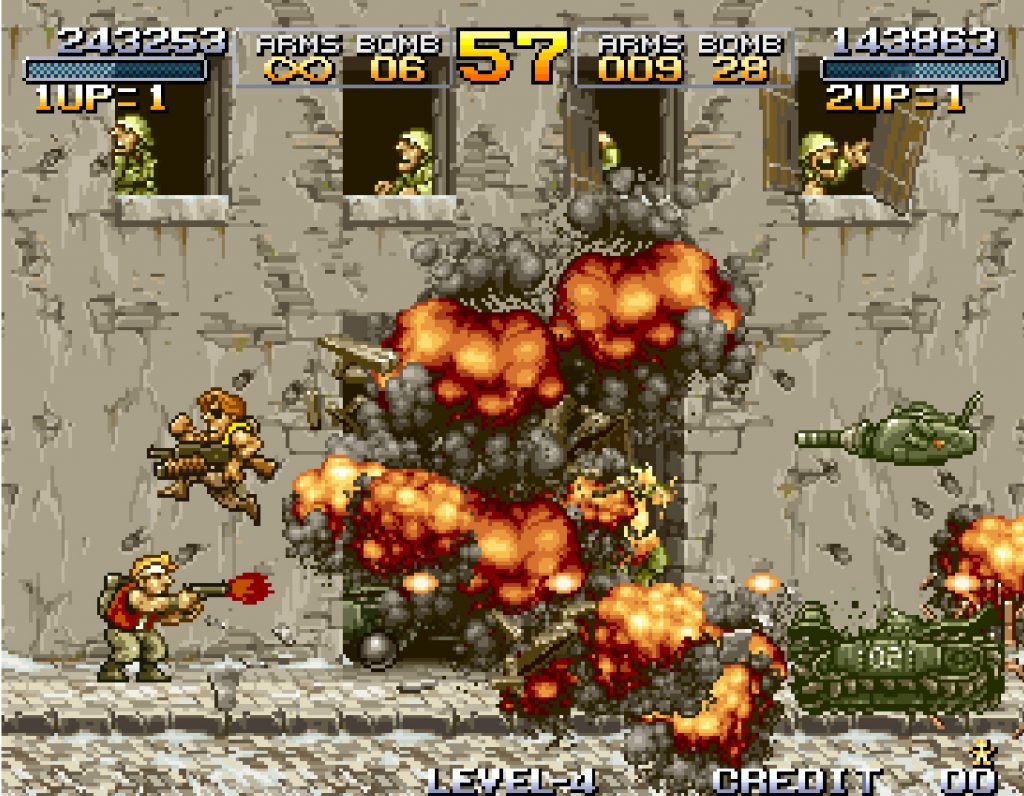 Imagine this for a couple hours straight at a fluid framerate. Part of what made Metal Slug hard was the fact that the game’s graphics were so good all over the place, it was distracting.

Now, wrap your head around this—somehow the Neo-Geo survived for 15 YEARS between 1989 and 2004. Can you imagine what kind of competition Nintendo would’ve had if SNK made carts you could afford (the Neo-Geo CD notwithstanding)? Nintendo would be competing with the Neo-Geo with the fuckin’ GameCube!

Normally my game reviews do go on for a bit before I talk about the game itself, but this whole time I’ve actually been building a very strong point.

What’s that point, you ask?

But…well… “BEST” is quite the misnomer. In terms of the insane royal-grade pedigree going on here, “best” and “good” may be separate entities entirely. Like any collection of games a company is shoveling for a quick buck, the quality comes and goes, and many titles will receive more attention than others. 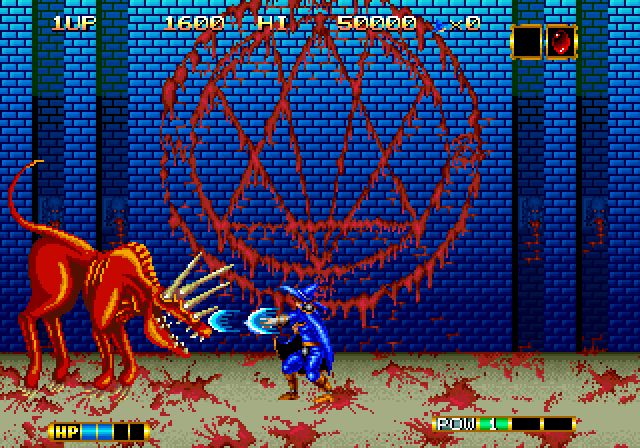 It’s a good thing those Nick Arcade kids weren’t able to get very far when they played. Nobody wants to see a 12-year-old scared gay on national TV.

However, with the 16 games on here, it’s not a bad little roster: 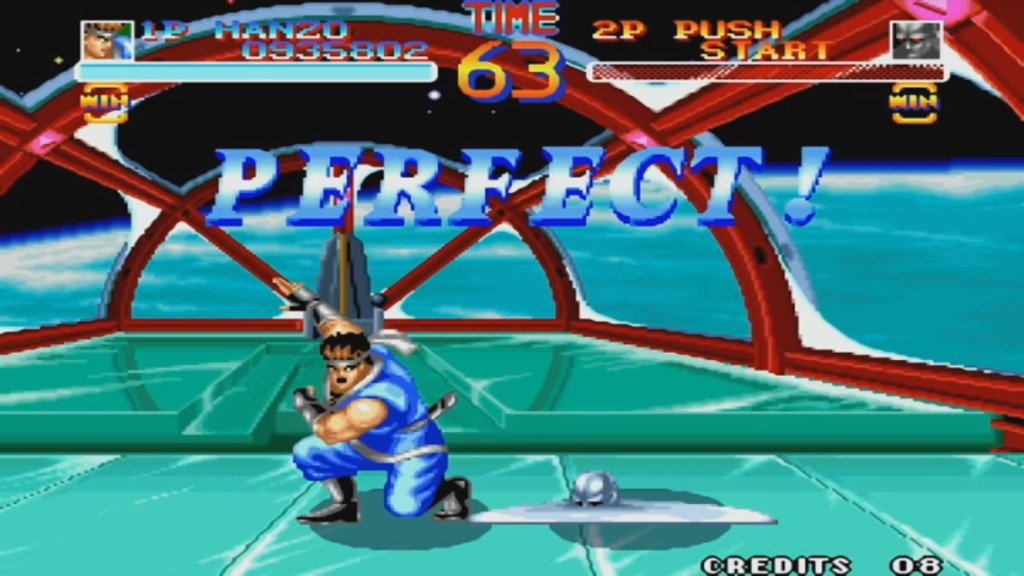 Probably the only real reason to play World Heroes is so you could see this. Now that you’ve seen it, act surprised when you’re playing the game.

These collections are never much more than the sum of their parts, unless it’s Mega Man or a franchise that’s AAA quality material, so the fun factor really depends on how much gorgeous SNK knockoff material you can stomach. The frame holding these ROMs together is pretty efficient and lean, though I had some initial trouble in setting up the game to take the GameCube controller. You earn achievement material by meeting the usual, and some rather unusual, requirements to unlock move sets, galleries and so on. The frame itself is pretty minimalistic, which for a set like this is good.

So, bottom line, $12 was a damn good deal. Some games are obviously better than others and SNK hasn’t captured the heart of the gaming world like Mega Man and Street Fighter and such have, but if you’re dying for legitimate classic gameplay that you haven’t played to death, don’t search out the old Neo-Geo shit unless you can’t even literally burn your money away (although eBay seems to suggest they’re more affordable now than they ever used to be), pick this up for 1/1357th of the original price and only 1.5/2th of the original fun. That’s right, my muthafuckin’ fractions keepz it REALZ, yo.

There is such a thing as a hard videogame. Whether it's through conscious decision, design flaw, or artificial means, when a game becomes too difficult, merely the act of playing it is an insult to bo