I don’t know much about dodgeball. But there is one piece of advice that I can offer…

From first peek, Girl’s Dodge Ball looks like Dead or Alive Xtreme. This should have been ample reason to stay as far away as possible.

One interesting feature you may notice is that Girl’s Dodge Ball simply cannot be played. This game crashes before you can even imagine doing anything, as though it were a sentient lifeform ashamed of its own quality. It crashes constantly, consistently, in the same place. User reviews that point this out seem to vaporize from the AppStore. I doubt any company would hide their failures and fiddle with the scores to make themselves look better. It would be just as easy to fix the problems…right?

On the plus side, at least Girl’s Dodge Ball has the decency to stop all by itself. Dead or Alive Xtreme 2 expects you to press the guide button and quit of your own accord. 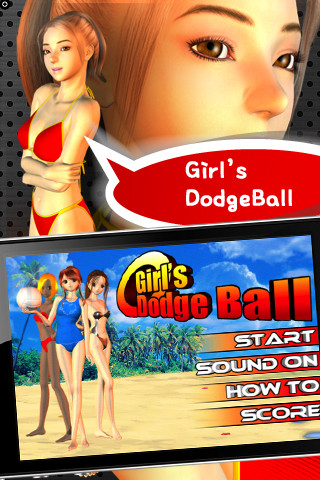 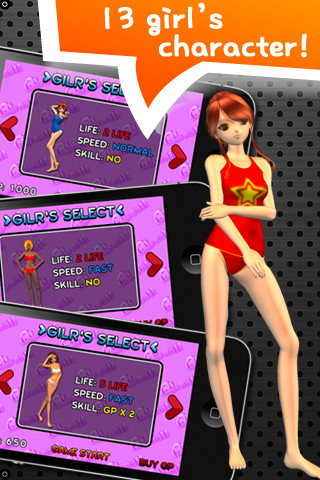 Who is Gilr, and does he mind me using his select?

There are constant spelling and grammatical mistakes, though nothing on par with the atrocities seen in Dino Cap 2. I didn’t know that illiterate teenagers crafted games these days.

Whatever “achivements” are, they sure sound exciting. The game tries desperately to cover the spelling mistakes by having advertisements appear at the top of the screen. All of the advertisements I’ve seen might have been for games I don’t want to play, but at least you can play those games.

Well, I’ll just select which “gilr” I want to play as. You know what? Maybe “gilr” isn’t a spelling mistake. These characters certainly do not look human. There’s also only two to pick from. It isn’t possible to unlock the others; doing so requires spending virtual money.

You can earn the virtual money just by playing, but whenever I go to start the game, a remix of Chris Rea’s “On The Beach” plays and the iPod crashes back to the springboard. You can also buy the fake currency by spending real currency. If I discover that anyone has actually done this, I will forcibly remove their brains through their arsehole. It sounds really painful, but it shouldn’t be too hard to do, seeing as their  brains must already be swimming in stools to begin with. 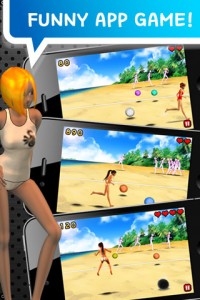 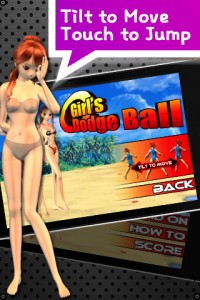 “Funny App Game!” Try again—it’s neither funny, nor a game.

Aren’t there any nice things I can say about this game? No, not at all; there is absolutely nothing that even remotely springs to mind. While we’re talking about reasons why this game is flawed fundamentally, might I draw your attention to the title, which should be written as Girls’ not Gilr’s or Girl’s? Unless it is about one particular specific girl’s “dodgeball,” which it isn’t. The game doesn’t even function, so it could be about a magical ball for all we know.

It doesn’t matter any that the game is free to download; if it doesn’t work, then it doesn’t work! I find this ironic, considering that the latest update “fixes some bugs.” And now, for the score…

But wait! I recently came into acquisition of an iPad 2. As if by a Toca’s Miracle, Girl’s Dodge Ball actually runs on that system (while in iPhone App mode). Unfortunately, it operates poorly and has a graphical error that makes it hard to read your score.

The game is surprisingly entertaining, though. Collecting the unlockables is fun, although everything can be won in about half an hour if you put your mind to it. You have to avoid multi-colored dodgeballs thrown at you by pink shiny robot ladies. The ease in which you earn virtual money destroys the whole point in spending real money anyway, which is good, because buying virtual currency is a sin.

When I play this game on the platform it was intended for, though, it crashes every time. So the score still needs to reflect this. I hate to be a spoil-sport, but I am sticking to my guns with this rating.

This is what happens when you quit your job to continue the franchise you helped start.