Let me see…what’s the next game that I’ve been assigned to review? Looks like it’s…Strange Loves: Vampire Boyfriends. Huh. Well, let’s go through the list.

OK, so according to the checklist…this game gets an automatic 10 out of 10. Nice! 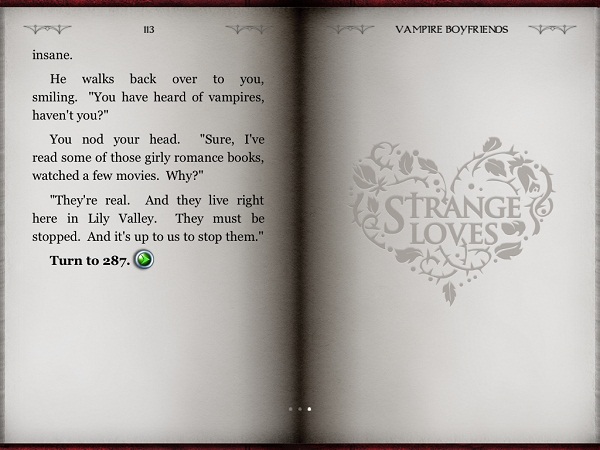 Strange Loves: Vampire Boyfriends is basically a Choose Your Own Adventure book. If you haven’t read one of those before, it’s a book where you have some control over what happens in the story. For example, in this game, you star as a college student. You get to choose whether she is a theater major, or whether she is a kung-fu major with an internship at a local vampire-slaying company. This obviously affects what she can do later on in the book.

Each time you make a decision, it takes you to another chapter. For example, if you decide to go party with your friends, you move on to Chapter 60. If you decide to stay at home and be boring, you move on to Chapter 21. There are over 300 chapters in the game, and most of them are 1 to 3 pages long. Once or twice, you’ll run into three half-page chapters in a row, which causes me to suspect that they might have used a little bit of inflation to reach the “300 chapters” mark.

The best feature of this game is the bookmark tool, which will save your place in the story. So, if you’re not sure what decision to make, you can bookmark it and come back later, if you decide you want to go with the other option instead. It is a brilliant feature which saves you from a lot of unnecessary rereading. However, you can only have ten bookmarks at once, and there’s no way to delete a bookmark without restarting the entire game. This means that once you’ve reached ten bookmarks, you’re stuck, unless you want to restart. 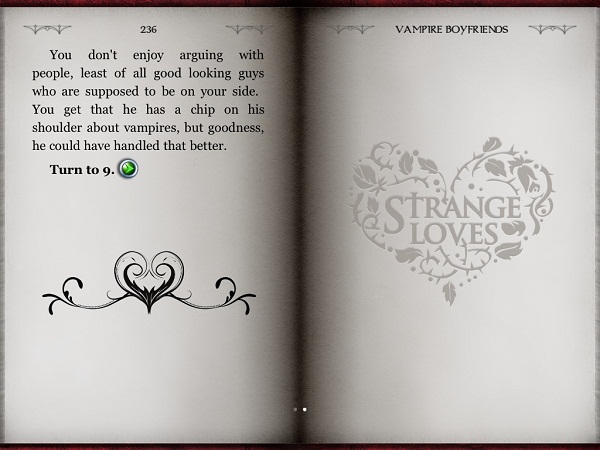 You have to play the game three or so times to get a sense of the overall story. Your character learns that vampires exist, either because she’s in a play with one, because she’s a vampire slayer, or because she went to the bar where a vampire works as a bartender. Learning about vampires turns her world upside-down, and she’s forced to confront difficult issues, such as the nature of love, what it means to be human, and–nah, I’m just kidding. The only difficult decision she has to make is figuring out which vampire she wants to date.

A problem most GameCola readers are familiar with, I’m sure.

The two possible candidates for Vampire Boyfriend are Lukas the actor, and Royce the bartender. They come from different vampire families, who have been having a feud for centuries now. Your character is “The Chosen One,” so as soon as you pick one boyfriend, you’ll be sent on a mission to kill the other. About 70% of all the playthroughs result in this ending.

Even though the vampire-slaying mission is exciting, sadly, a good deal of potential drama is lost here. When you’re destroying the vampire’s house, the boyfriend is killed offscreen. So…the main antagonist is absent from all the endings to the game. Same thing with your character’s Watcher. Kind of a weird ending, right? You’d think that the title character would actually show up for his big death scene. 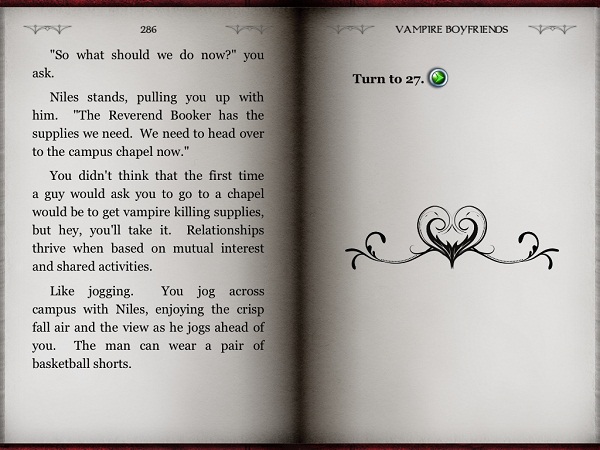 The writing style of this book is good. My favorite part were the jokes, which poked some fun at the overall story and/or the Twilight series. The book is definitely lighter fare, but it’s still moderately entertaining, and you can have fun trying to get all the different endings. But odds are, once you’ve finished with the game, you won’t pick it up again until a year or so, when you’ve forgotten what happens in the story.

In the end, Strange Loves: Vampire Boyfriends is little more than a fun Choose Your Own Adventure book, somewhat based off of Twilight. It’s not very deep, but then again, neither is Twilight. At three dollars, it’s much cheaper than an eBook of Twilight or Choose Your Own Adventure, which I think is rather nice. I’ll be interested in seeing the other two books in this three-part series, which star robot boyfriends and wizard boyfriends, respectively.