I suppose it’s no secret that I love the Nancy Drew series of adventure games. Her mystery games always keep me entertained. But when it comes to Sherlock Holmes—a fantastic detective whose book series might be even more popular than Nancy Drew’s—the videogame world has left me sorely disappointed. 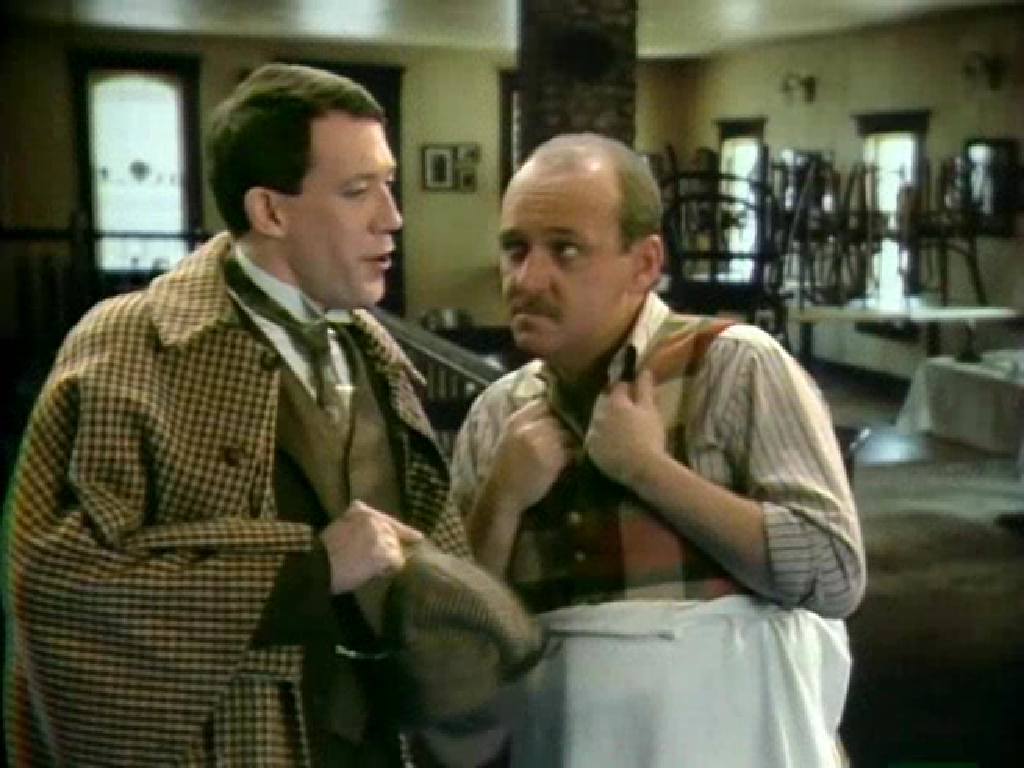 Porky Shinwell is one of several comedy relief characters.

There is not too much, in terms of gameplay. Basically, you have a large list of people to see or places to investigate. The list has 221 entries, with a healthy selection of duplicates and red herrings. Pick a place from the list, then watch a movie clip as Holmes and Watson go there. Investigate anything and everything you want; once you think you’ve solved the mystery, you can take the case to a judge.

There are two optional ways to investigate: reading The London Times and using the Baker Street Irregulars. Together, they form what I call “no video mode.” I guess it’s nice that you have the option of playing the game without seeing video clips, but really, it seems pointless. Nobody is going to prefer reading a newspaper to seeing Holmes solve mysteries. Why bother including a no video mode on an FMV game? That’s like a first-person shooter with a no guns mode.

There is also Watson’s notebook, which summarizes the investigation so far. If needed, you can get hints on what to do next, from this area. Annoyingly, Watson will often give hints that tell you to do things you’ve already done.

I like how the gameplay is set up (besides for the no video mode). The game forces you to pay attention and solve the mystery yourself. It also requires you to support your solution with actual facts, instead of guesswork. A mystery game which actually requires you to think about the mystery, instead of holding your hand through the solution? All right! 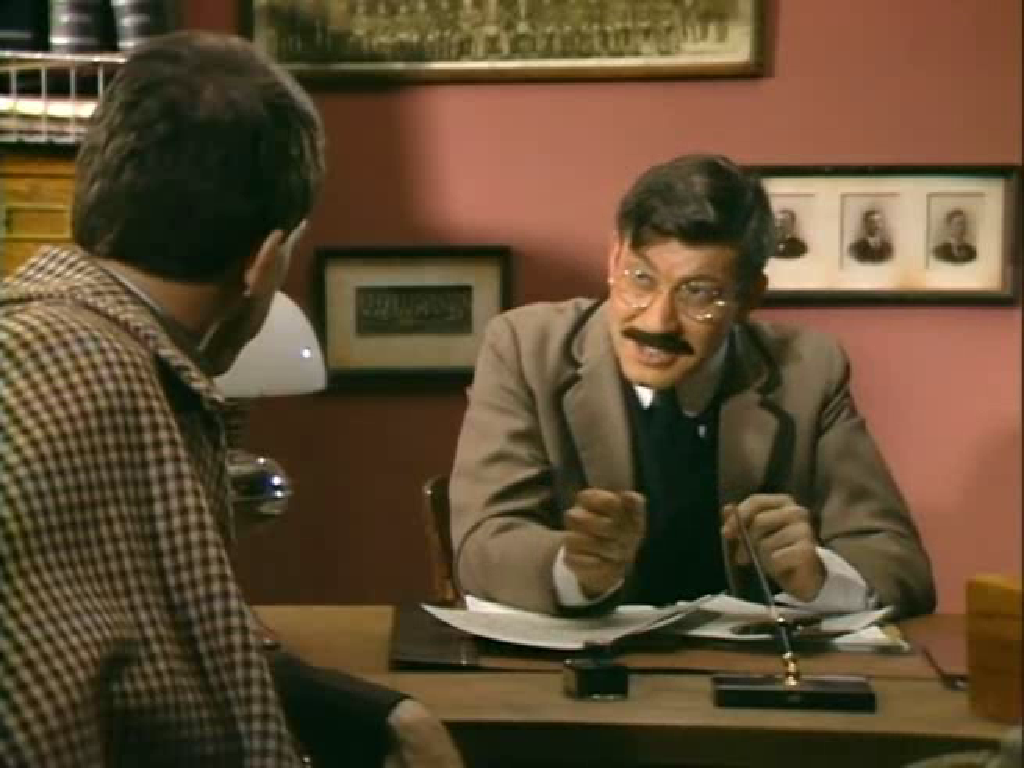 OK, now ignore all the nice things I said in the previous paragraph. The mechanic of having you solve the mystery yourself is a great idea, but it is poorly implemented. Here’s why:

Case #1: The Mummy’s Curse: The solution to this case is a bit of a stretch. The killer’s motive is little more than “the victim was mean to me once, nine months ago.”

Case #2: The Tin Soldier: The solution to this case is handed to you on a silver platter. Holmes’ case-solving deduction here is “the murderer is probably the man with the murder weapon.” That’s some brilliant detective work, right there. I must say, it was very convenient for Holmes that the murderer left all the incriminating evidence in plain sight.

Case #3: The Mystified Murderess: It is impossible to solve this case without cheating. That is because the solution requires you to visit “Goff, S.”, even though Goff is never mentioned by anyone, at any point. It is completely unreasonable to expect players to randomly pick the one correct location from a list of 221.

Wait a second! Why did I list the three cases separately? They’re all part of the same game!

Well, as it turns out, they’re not. The original 1991 game had all three cases together. But the iPad release doesn’t. They split up the game into three parts, so they could sell them separately on iTunes and make greater profit. Argh! 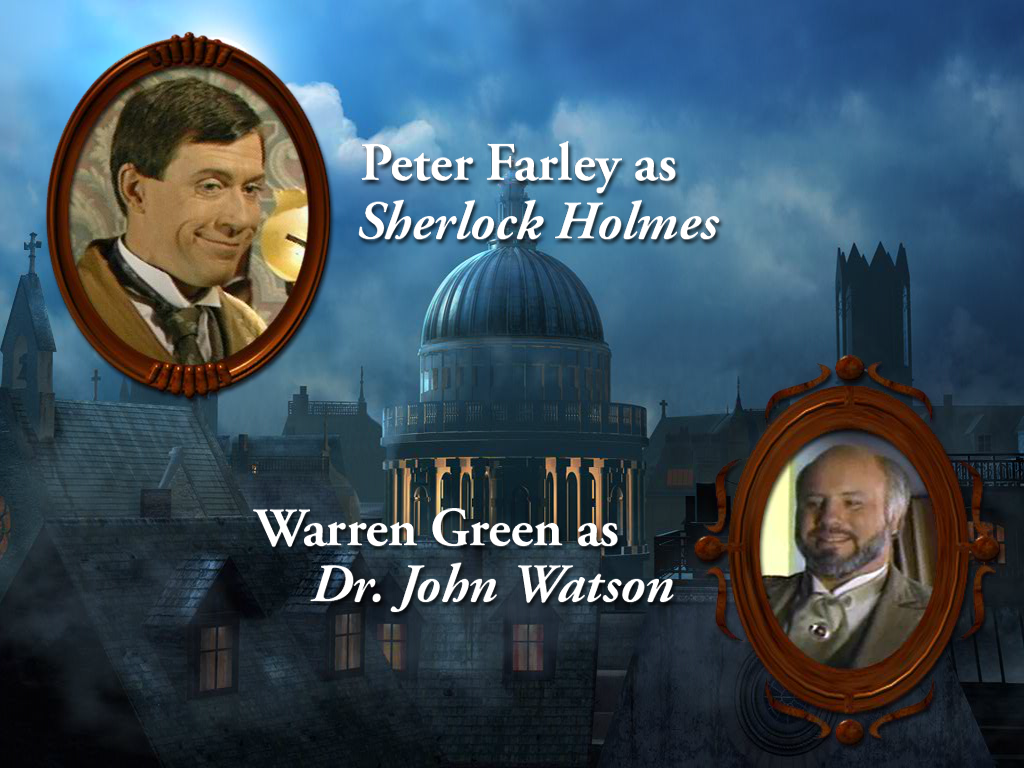 IMDB says that neither of these men worked as actors again. However, Warren Green’s beard went on to star as Clint Eastwood’s beard.

Speaking of the iPad release, there are claims that the original 1991 graphics were upgraded for the iPad. I’m going to be generous and say that this might be true. However, I am not generous enough to say that the graphics are HD-quality. That’s obviously not true; you can tell that the graphics were designed for a smaller screen. I’m willing to overlook this, because the video quality is perfectly acceptable, and the original footage probably wasn’t shot in HD, anyway.

In the end, I suppose that the iPad version of Sherlock Holmes Consulting Detective is an exact duplicate of the 1991 game. They changed as little as possible for this port, which was probably the smartest move. It’s an interesting FMV mystery game and certainly the most fun Sherlock Holmes videogame I’ve ever played.

You know who is a super toucan? That Toucan Sam. It’s a shame his son went on to kill all those people, you know, Son of Toucan Sam. He stood proud and continued to sell cereal up until his death in ...