So, a hidden objects/adventure game about Phantom of the Opera? To a girl obsessed with POTO, this sounds amazing, right? I watched part of a walkthrough of it on YouTube and decided I would buy it. The result was two days of trying to figure out what the heck I was supposed to do, but this may just be because I’m an idiot.

The game takes place maybe seventeen years after the end of Phantom, and that means the book, not the musical. Raoul and Christine de Chagny have been married for a good amount of time and have a daughter named Evalina. It opens with them leaving a play, and Evalina asks what it was like when her mother was performing. A little boy comes out of nowhere with a letter for “Miss Daae.” He hands the letter to Evalina and she reads it. The letter is from the Phantom, asking her to come to the opera house. In the picture they show, Raoul and Christine are looking over her shoulder as she reads this, and they don’t seem to think anything is suspicious about it. 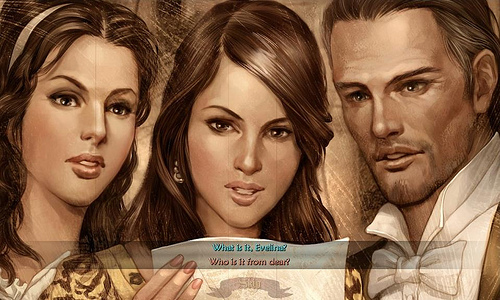 The game thus begins with Evalina walking into the opera house, which is in disrepair. That should have been her first sign that this was a bad idea. It’s dark and she has to find a flashlight, which is on the counter next her. The first puzzle is a “follow the rope” kind of puzzle. It’s boring and I personally hate those puzzles, so I just guessed. It’s an easy enough pattern to memorize if you play it more than once. After that comes a hidden objects puzzle. With these kinds of games, I like screwing around and seeing what’ll happen if I click around the screen too many times. In this game, Erik (the Phantom) gets pissed and smashes some glass that is apparently in Evalina’s eye.

After that little puzzle, you find a ticket to give to a dummy standing next to a curtain. The curtain falls and the Phantom is standing there saying something like “You’re not leaving this time, my love.” Evalina must have been pretty damn confused after that. You go around the rooms, solving puzzles until you get to one room that has water that is sparkling. You have to mop it up and then Erik appears in the mirror, telling you to get him a black rose. Fortunately, there is a black rose in the dining room. The puzzle you have to solve to get it out involves putting people’s ashes in order. Evalina does not seem all that disturbed by this, I’d like to point out. The way you find out which ashes go to which date is by examining a few headstones that are outside. When you click on the headstones, the game writes the clue down for you in Evalina’s journal. This is a mechanic that I absolutely love, since I’m extremely lazy and don’t write things down in games unless I absolutely have to.

This is basically the entire game. You wander around the opera house, solving puzzles and finding hidden objects, all the while getting Erik his precious black roses to “prove your love to him.” There are a few hidden-object puzzles that make no sense, like in the library when you have to go digging into a candle to find a chess piece. There is no indication that you should do that, unless you go to your map and see a red exclamation point on the room and use the hint button. That was annoying and it took me at least an hour to figure out (I’m also not the smartest person, if we haven’t mentioned it yet). 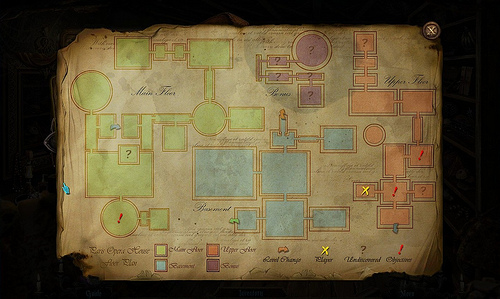 I love this map; it’s very helpful if you don’t know what you’re doing.

The end of the game comes about when you find the final rose and Erik pulls you down to his catacombs. That is it. You don’t get out of there, Erik keeps you forever, and that’s it. I hate that ending, but otherwise, the game is pretty OK.

The plot was good enough, the puzzles weren’t that bad unless you had to find something with the hint button (these were not part of the hidden object sections), and it was basically an easy game. The map, journal, and hint button are amazingly helpful. The game really does make you click on just about everything in the rooms for the different puzzles, and I sort of like that. The other good thing is the skip button. One of the puzzles involves chess, and I didn’t know how to play until a few weeks ago. This puzzle involved me moving knights around a queen until the skip bar filled up (not sure exactly how long it takes, but it seems like five minutes).

In conclusion, the game wasn’t that bad, the hidden objects puzzles were all right, and the ending was annoying. All in all, I would recommend it. The game is available on PC and iPad.

Matches and Matrimony: A Pride and Prejudice Tale is a hard game to describe. To put it in one sentence, it's a dating sim, based off of Jane Austen novels. And it is basically the greatest game ever.