Shooooooot, the game doesn’t even have time to explain itself? Why am I even here then?

It’s difficult to begin talking about this game. Right off the bat, No Time to Explain is a unique experience and immediately creates an identity. How does it accomplish this? I don’t think it can be described in words…just…just take a look at this.

Hate tutorials? Hate games spending your first half-hour explaining what it is, why it is, how it is, when it is, and whatever else it is? You’ll enjoy what this game has to offer. I tell you the truth that this game throws you in, gives you a couple levels to get used to the mechanics, and then begins to exponentially dive into COMPLETE AND UTTER RIDICULOUSNESS. It’s amazing.

Perhaps some backstory will help sort out the nonsense. No Time to Explain is a game that’s been working toward a Steam release for a very long time. It’s had a lot of fan support and there’s clearly great talent behind it. From the looks of things, from Kickstarters to Greenlights, this game has come into fruition though almost exclusively fan support, which may be how this game is able to keep its charm in a sea of average platformers that really miss the mark when it comes to weird humor.

You’ve got a gun, and it’s basically your main mechanic through most of the game. The gun shoots out a powerful beam that is used to propel you into the air way more often than it is to actually shoot things, which it does do on occasion. This isn’t a unique concept, but this game relies on it much stronger than games I’ve seen before, cause your regular jump in this game is pretty wimpy when compared to other platformers. You are gonna be good friends with this gun if you want to get through this. 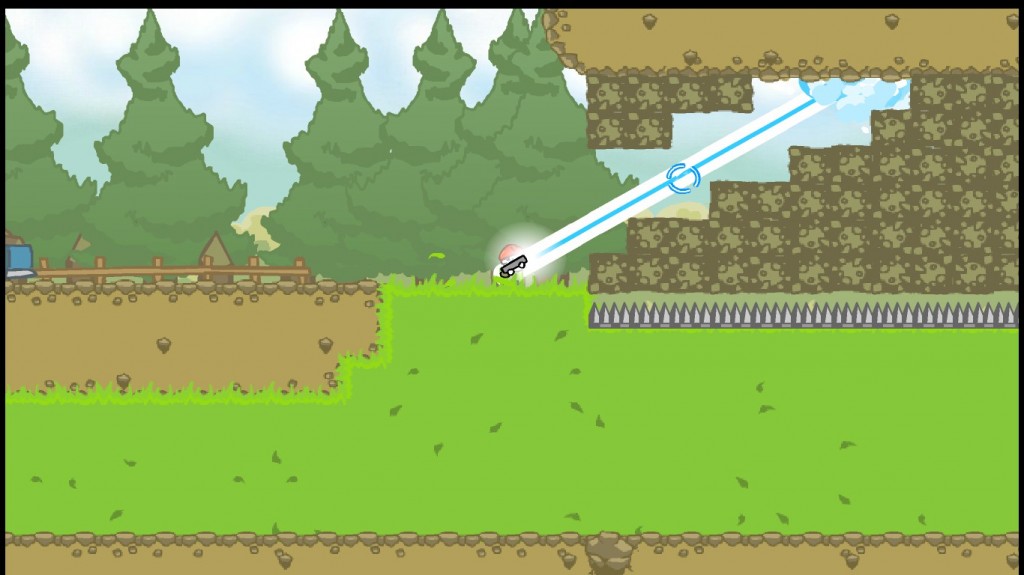 This gun isn’t the only thing that you use though. Throughout the game, you’ll be confronted with many levels with ridiculous premises, like one where you are a football player with a gun that just blasts one shot rather than a continuous stream, or a set of levels where you’re drawn to wherever you click the mouse. These levels really help to keep the game varied as you play it, so you don’t get weighed down by an overused concept as you move from crazy plot point to crazy plot point, which is a problem with a lot of games with very strong stories.

The levels are also fairly difficult. It’s not excruciatingly taxing, but you will get frustrated every now and then as you play through. In general the challenges are all fair and well designed, but as with any game there are a few instances which just seem unfair. Of particular note is a gopher/mole/cyborg boss that has the ability to kill you in one hit by several means halfway through the battle but cannot damage you at all during the first half, making replaying the battle a tedious and frustrating experience. A few other levels seemed a bit unfairly challenged, but the vast majority of the game is very well set in its difficulty and makes the challenge fun.

I’ve been mentioning story, but let’s be clear—this ain’t your grampa’s type of “story.” The plot goes in which ways and what ways all over the place mainly for the sake of being ridiculous, yet the creators of the game still put in themes tying all of these random occurrences together so you at least feel like you are making progress. It also makes the final battle and finishing the game more satisfying as the villain does appear throughout the rest of the game, rather than just some random mole thing you’re fighting. 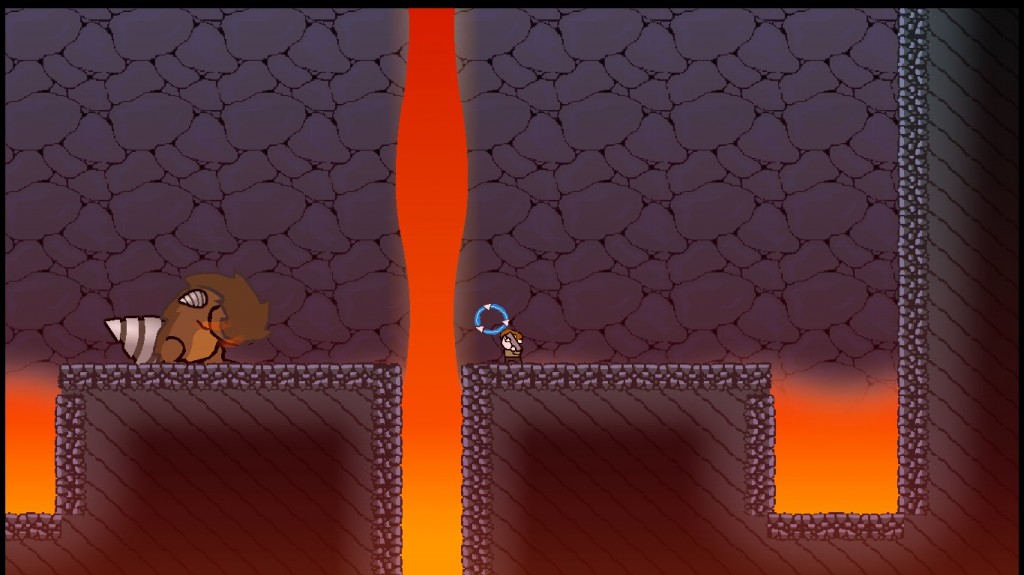 The game is alsovery careful about choosing where you respawn. In some of the more action-oriented levels, you will generally respawn from the last solid ground you stood on. In some of the more puzzle-based levels you will have to restart from scratch, but this is generally only done if dying and coming back with everything intact removes the challenge of the level. It’s well thought out and I really appreciated it as I fought my way through the challenges.

The music is dang well catchy, as well as pretty epic at times. It’s very rhythmic, and many levels will sort of remix the tracks, further tying the madness of this game together. The individual tracks seem to build on themselves as they progress, and they’re refreshing to listen to as you attempt levels over and over again due to difficulty.

There is also great, entertaining voice work (apparently all done by one guy) throughout the game. In the early levels he will throw out a quote every time you die, which could theoretically get annoying. Luckily, he shouts out hilarious things like “FORGIVE ME HASBRO!” and “THIS WAS A BRAND NEW SHIRT,” and other, even more clever phrases as he is eaten by various monsters, which keeps it from being tiring and instead makes the experience incredibly amusing. However, if you do eventually tire of his shenanigans, there is an option to turn it off in the menu.

Speaking of the menu, as a small side note for those who may have seen this game in an earlier stage, the menu has been revamped to include a full-screen mode as well as volume adjusters for both the sound effects and music. I only bring this up because research shows that previous versions lacked these settings, and it could be just one of those things that made you wary of purchasing the title. 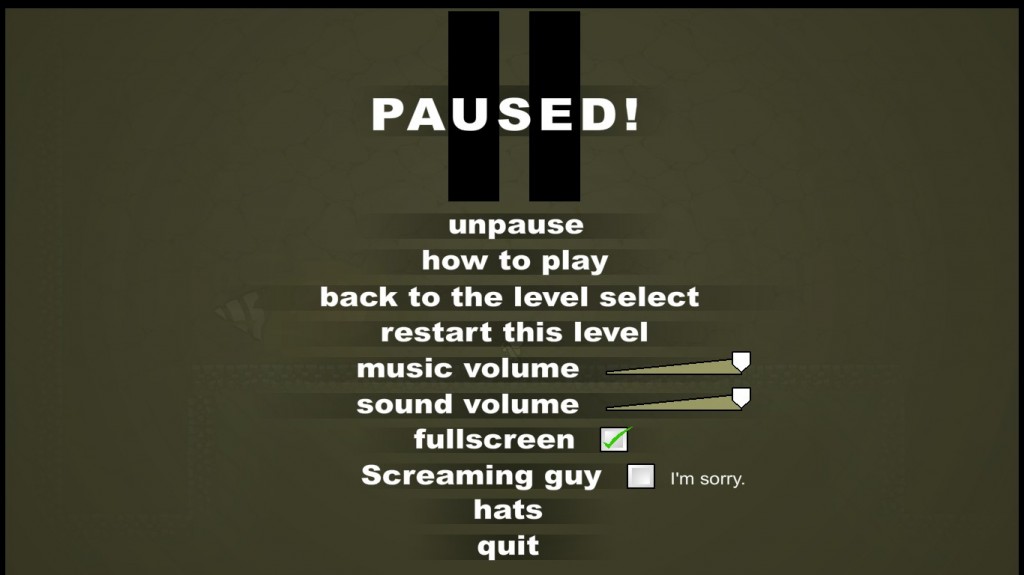 There are also collectable hats throughout each set of levels that give you a good incentive to replay them, as well as new levels unlocked after you beat the game. This gives the game a good amount of extra content, which is especially nice since the main game can be beaten in just a few hours.

Now, unfortunately, it’s not all just hilarious time paradoxes and strolling through grassy fields of amusing death here. No Time to Explain unfortunately suffers from…well…a particular problem that is difficult to describe when it comes to PC games.

Glitches. Bugs. Computation errors; whatever you want to call them. There are a significant amount of them in this game.

It’s hard to describe just how much these glitches will affect your experience, because a lot of it relies on little things that could be as small as a different memory card or RAM setting, or something trite like that. With consoles, everyone has the same hardware, so it is easy to denote these glitches and mass them with the game’s overall quality, but with PC games it seems nearly impossible to account for every computer setting and piece of hardware your audience could have. All of the glitches in No Time to Explain are incidental, and given your computer’s individual specs they may not be a problem at all. But the fact that I suffered an error that caused the final boss to be UNDEFEATABLE TWICE, I feel it’s fairly important to take notice.

I encountered all sorts of glitches like instant death spikes not actually causing me harm, or respawning on a jump pad that instantly kills me constantly. I even once blasted myself to a strange part of the level where I could take no action. Luckily, the pause menu has a level restart button that keeps most of these from being game-breaking experiences, but I have also encountered glitches that caused my entire game to crash.

Despite that negative note, No Time to Explain is a fantastic game with a refreshing sense of humor. I’m glad that the developers were able to get the support they needed to finally get this game on Steam, with all its hilarity intact. So, when your future self bursts in and tells you that there’s no time to explain and you need to buy this game, do not hesitate to do so.

Make your voice be heard in the 2013 GameCola Videogame Awards!