I don’t think anything in heaven or hell or anywhere in between could have prepared me for Potato Man Seeks the Troof, an inexplicable training marathon for the 2016 Mindfuck Olympics (sponsored by Reebok) as represented in a fluid faux-retraux platformer puzzle something or other by PixelJam. It is available for the PC or Mac in a $3 package that is just the .exe. No messy installs, just double-click the game and it plays (which is awesome).

I likely shared this sentiment on GameCola already, but when I was a little girl dreaming of the future of videogaming, I dreamt of technology that expanded the possibilities of what we already had, not simply creating huge, bloated, complicated experiences like Call of Duty, Skyrim, and every modern mainstream thing out there. I wanted a game that was simple at its core, pick-up-and-play, that focused on what it could with that simplicity. I’m lucky now that the last couple years have finally yielded the future I killed so many alternate universes in a blood reign of quantum-laced insanity and genocide to obtain, but Potatoman Seeks the Troof somehow takes that even further—like a desirable future even from THIS future that I would someday want, and makes me want it HARD.

I’m very glad I had the opportunity to review this game, because I would daresay it’s probably the most impressive indie game I’ve played since the first fucking Exile game by Spiderweb Software. My jaw had to physically drop as I played just to cope with the amount of awesomeness each step of progress from left to right brought me. I’m not playing a game; I’m playing someone’s bath salt-induced delusion that you could literally cram creativity into every second of gameplay and get away with it.

The goal of this game is to seek the “Troof”—well what the hell is the troof? The enemies along the width of the title each have something to say on troof, and their dialogue is almost Moonside-esque without the obvious textual experimentation. The whole game is probably the closest thing to a modern EarthBound I’ve yet seen, just in a super simple platformer where the entire object is to jump and avoid. You go through desert, forest, volcano?, city and…something…to seek troof without hurting anything in the process, including yourself, and that’s quite a challenge. 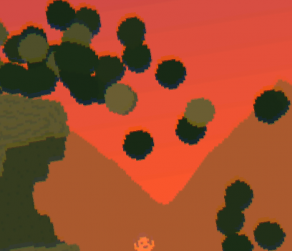 I can’t actually come up with an appropriate caption that
does justice to a volcanic rain of dog droppings aiming to
crush a sentient, mobile potato. Can you?

The graphics used are an anachronistic blend of old-school Atari and modern visual effects, even a bullshit 3D thing for no real reason other than “jus’ cuz, foo’!” The landscapes shift and tilt, bubble and explode and challenge your meager concepts of vision from start to finish. The soundtrack sounds like it was done by Com Truise who forgot to put drums in, and somehow it adds to the experience rather than taking it away, through surreal setups that each somehow top the other leading up to one hell of a Gainax ending. It’s easily some of the best, most attention-getting and brain-busting 20 minutes of gameplay I’ve ever played.

Yep. I got through the game in 20 minutes, and that includes dying 130 times through the very random physics that employ unkillable obstacles like rocks, scorpions, dots that shoot other dots, other dots…chickens, eggs…really? A potato man can’t kill ANY of these things? Seems like it would make the game a little bit easier instead of dying every three seconds trying to get over a hump.

That’s the other major irritation about this super-short game—the obstacles are awesomely challenging, but their physics are so hard to get a feel for that it takes more luck than skill to get through harder sections. It’s a very annoying one-hit-kill sort of game where the slightest smidge to the left or right is a sudden BOOM-AHHHHHHH! You do get to start back at just before the obstacle most times to eliminate some stress, but because the game routinely changes things up (rather brilliantly I might add) and pretty much never tells you ANYTHING, it’s total trial-and-error, which is not befitting a fast-paced platformer.

It’s too bad Sid Barrett never got to play this game…would’a shocked his dumbass straight
and put Roger Waters back on bass only where he belongs.

I think that’s all I have to report on this game. It feels like maybe I didn’t do something right and got a very early BAD ENDING when maybe there are 30 more levels or something, but with the way this game goes, it’s probably very intentional—and while I do respect that it took a LONG time and a LOT of work to have a game where every second is amazing and even 20 minutes of it should be respected, but, c’mon, we’re players, not game programmers, and a 20-minute game is still really fucking short by ANY standards.

Had this game actually been full-sized, I would’ve said nothing short of a 9.5 would have been appropriate. The execution is OUTSTANDING and it never lets go of your attention but, oh my God, only a few levels and cheap deaths that pad out the gameplay? No sir, that’s a penalty that I did not see coming. Even a low price like $3 is not really worth what feels like a demo for an upcoming game.

If this game ever does become full-sized, count me in as a customer. $20 or more I would pay for a full-length version on my Wii or something similar. That would be an awesome day for videogaming, but as of now, it’s just a spoonful of LSD with promises of good things to come that may, or may not, be your brain cells’ last thoughts before dying out.

Either way, it’s at least worth seeing while it lasts…