A current-gen title with that over-the-top craziness we love from Japanese developers.

Not long ago I finally let myself buy Operation Darkness through Xbox Live’s Games on Demand, and after playing it for almost two months, I really need to talk about it.

Operation Darkness’ plot is loosely based on the battles fought on the European front of World War II, and the game puts heavy emphasis on explaining the development of the conflict along with the circumstances surrounding its main characters. Your role in this game is to take command of a special unit conveniently named The Wolf Pack, a group formed to counter enemies that are “beyond human.” The team itself even integrates some other beyond-human individuals, including a couple of werewolves.

According to the game’s story, The Wolf Pack joins this war to put a stop to a clan of vampires (The Blood Clan), who had joined the Nazis in their quest for world domination.

If you either chuckled or rolled your eyes after reading that last sentence, it’s because you also had to endure five years of Twilight. Now that the last spawn of that awful series has gone, I have to remind you that this game was released in June 2008 (in America), when wolves and vampires were still cool. 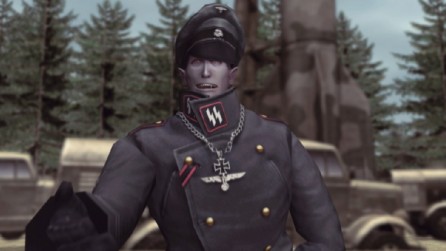 Vampires in this game don’t die under the sunlight, but at least they don’t f#$&ing glitter!

Fortunately, you won’t be forced to suck in the whole backstory at once. Operation Darkness puts you in the shoes of a pair of rookies who’ll help you settle and absorb the plot in small chunks along the way.

The main character is named Edward (an unfortunate coincidence, although you can rename him any way you want), and he’s transferred along with his friend Jude to the unit after being injured and saved by James Gallant, leader of The Wolf Pack, during a mission in Africa. In order to save Edward’s life, Gallant had to give him some of his own blood, and then he ordered their transference to the unit in order to keep an eye on Edward, since there was a possibility that he’d develop superhuman abilities after receiving blood from a werewolf. Most of the game will keep you following Edward as he realizes who these supernatural enemies working with the Nazis are, faces his own transformation into something not-entirely-human, and gets to know the real nature of his teammates.

By the way, should I add that it was just a single handgun shot in the back that caused all this mess?! 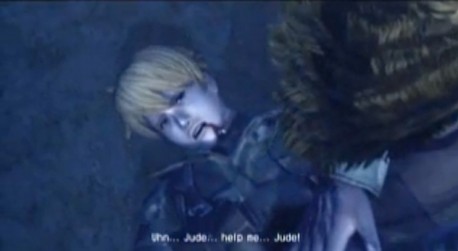 Videogame logic: You can be shot, blown up, sliced or crushed during the game, but if you’re wounded during a cutscene, it’s lethal!

The story is basically what you’d expect from a generic anime series, and by that, I mean that it’s not that good. I mean, aside from the conflict, you won’t be deeply involved with the main characters; there’s a little Tsundere conflict (love/hate relationship) between Edward and Cordelia Blake, bad guys always do bad things, there’s revenge and old rivalries between limeys and the krauts, and the game tries way too hard to make you feel sad if someone dies, but the end results are a little cheesy.

On the other hand, it’s kinda cool to see this game going Castlevania all the way and adding different kinds of lore and references into the mix; without spoiling anything, I’ll just say that you will encounter zombies, you’ll be aided by characters like Jack the Ripper and Elizabeth Van Helsing (descendant of…well, you already know), and nothing prepares you to face-off with the Japanese version of a dragon. 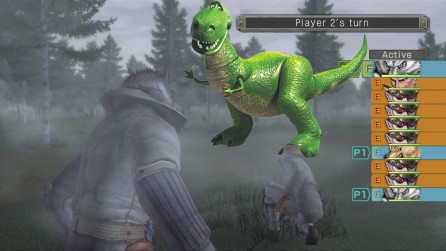 Oh, no…I won’t show you anything. Want to see a dragon? Play the game!

The gameplay is exactly what you’d expect from a strategy RPG, but since the characters in this story use firearms, you are more focused on keeping a safe distance between you and your enemies; this is why the battle maps are bigger than they tend to be in other games of this genre.

Unfortunately, the game’s presentation isn’t good enough to sell its core gameplay. The graphics and character models look unpolished compared to anything else from this generation. Also, the camera is really messy, and considering how big the maps in this game are, trying to get a hold of it feels like a daunting challenge in itself. 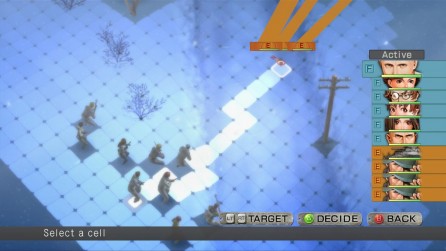 That’s a lot of space to cover…

In this graphics-obsessed and “I’m paying $60 for this—so it better be good” era of gaming, it isn’t really surprising that this game didn’t get the warmest reception by critics and players alike; I know I didn’t like it at first. According to vgchartz.com, Operation Darkness sold really poorly (around 50,000 copies), which surely makes me look like a crazy person every time I bring this game up in conversation. 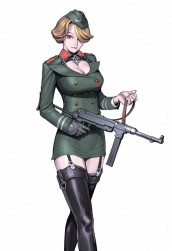 Carmilla: So many evil references embodied in one single character.

Once you get around (or forgive) some of the game’s flaws, then you’ll quickly see its real beauty past its graphics. One of the features that allured me the most is something I don’t see too often in nowaday’s games: that thing we ol’ schoolers used to call challenge.

Apart from its only difficulty setting (which sits somewhere between Really Really Hard and Masochist), Operation Darkness feels like an affair of the past; you can’t save your progress until the end of each battle, which unleashed my inner sailor every time an hour of progress went down the toilet because of a bad decision. While this has to be a major flaw in the game structure, that’s the only way a mistake actually feels like it; instead of going back to that save point you left five minutes ago, you’ll be working around the mess you got yourself into, which makes every victory even more rewarding.

The wide variety of enemies to be fought during the campaign keeps every battle interesting, and they’re always readily able to take advantage of any mistake you make on the battlefield, especially when all the odds are in your favor and you’re less wary about the placement of your units. 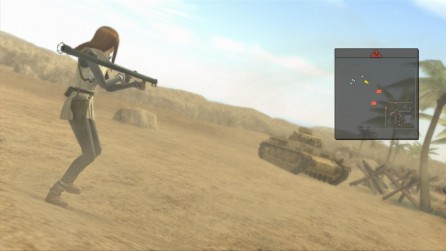 It’s hard for me to say if this game is universally good or bad. Critics were right four years ago; as a retail game with a $60 price point, Operation Darkness isn’t a very good game. It has all the potential, it’s gameplay is fun and challenging, but that doesn’t hide its flaws and underdeveloped presentation.

But today, as a downloadable game that you can (figuratively speaking) get your hands on for only $15 over Xbox Live’s Games on Demand, I can’t help but recommend it just for the sake of trying something different.

Actually, games like this deserve their own ESRB warnings:

GameCola.net: Gaming Outside the Mainstream is known for asking the hard-hitting questions, and the GameCola Podcast is no exception.