In Tennis in the Face, Ace tennis star Pete Pagassi gets addicted to an energy drink called Explodz. He’s arrested trying to steal a case of it, then after rehab he swears revenge on Explodz’s creators, blaming the energy drink for his failed career. You must use Pete’s ballistically-improbable tennis serve to knock down a bunch of clowns. Later on you’ll randomly attack police officers, hipsters (tastefully referred to as “Trendy Young Men”), executives, and other assorted mooks. 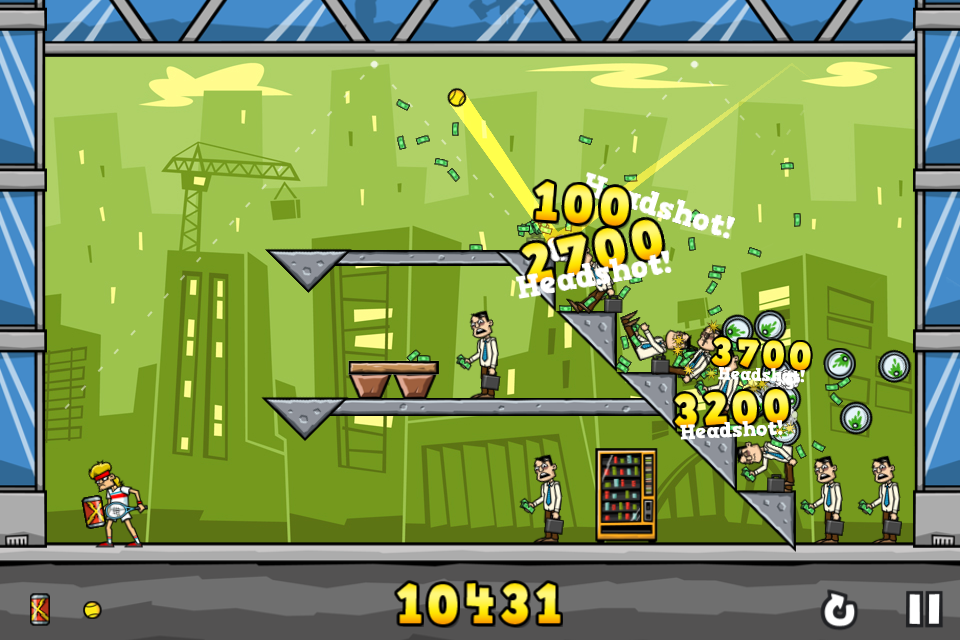 This is your basic one-screen-at-a-time puzzle game, trying to knock down all the mooks with tennis balls in as few shots as possible. Touch the screen for a line that represents Pete’s serve trajectory. Release your touch and he’ll rip a monstrous serve that bounces a bunch of times before eventually slowing down and disappearing, hitting mooks along the way. Each screen has different obstacles to make your shots more interesting. Later levels introduce exploding cases of energy drink, tennis ball cans, glass that kills your ball, etc. The game gives you new mechanics at an even pace, just enough time to master one and enjoy using it before finding another. 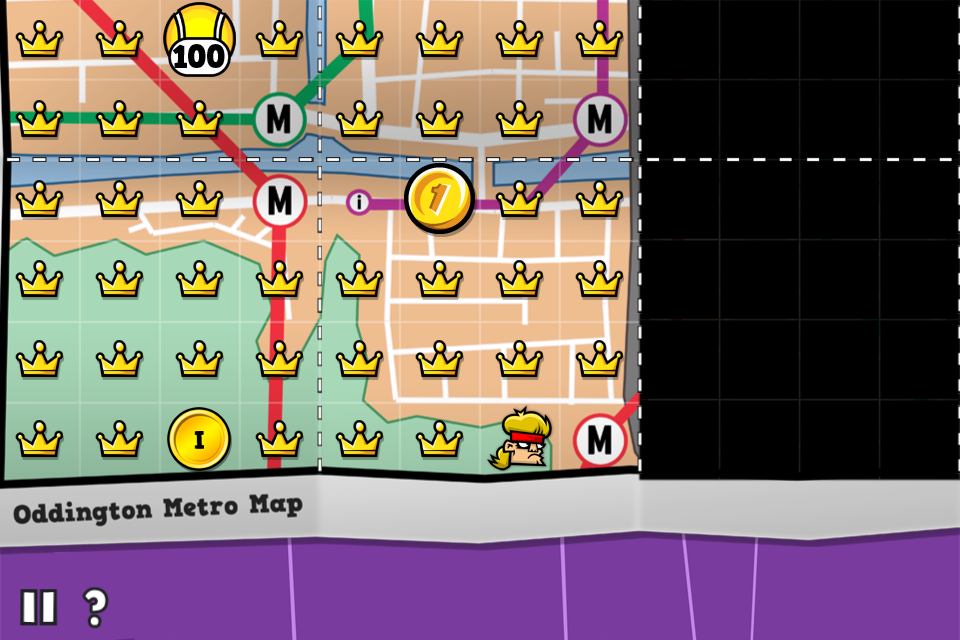 The levels tend to be one of three different types, similar to most games of the genre: it’s a gimmick level where you can immediately see where to fire; it’s a gimmick level with one “fake-out” spot and one “tricky” spot to fire at; or it’s a completely generic-looking setup where the best shot to earn your badge is anyone’s guess. In this case, having enough spare balls when all the mooks fall down earns you a crown for that level. And if you’re a completionist/perfectionist like me, then you’ll be spending a lot of time on just a few levels and blasting through the majority of them with no problem at all. 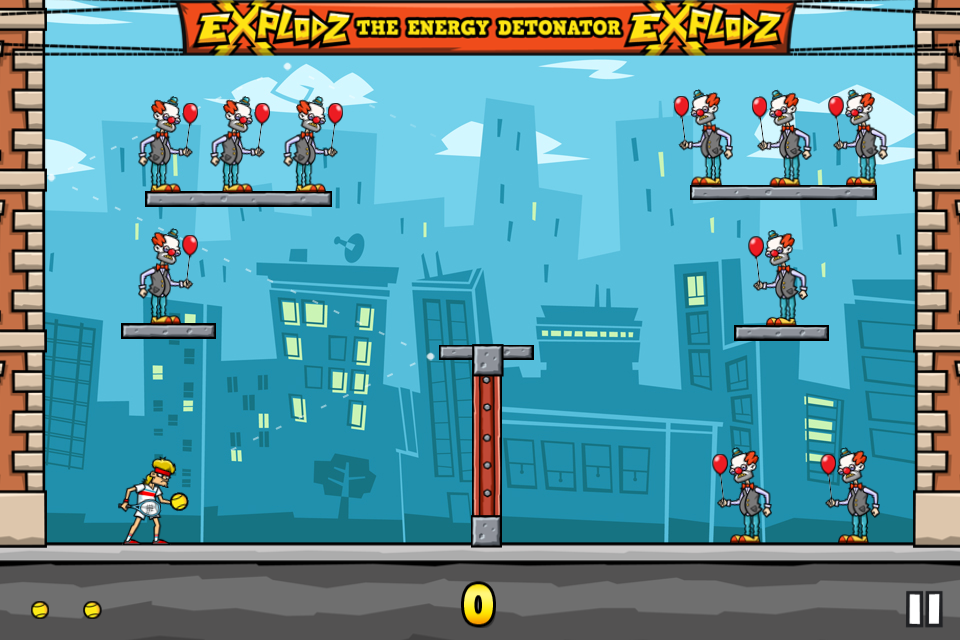 Case in point: the level above. It’s fully possible to finish this level with a single ball. I’ll be buggered if it didn’t take me just as much time to “ace” this level as it did for all the other clown levels combined, and that’s not exaggerating. Because of the game’s physics, a single pixel of difference in your release can have a drastic impact on where the ball ends up after three or four bounces.

It’s like flipping a coin with your thumb and trying to get it to land atop a soda can: You know what to do, but no matter how similar you make all of your shots you’ll end up with coins all over the place. Many of my picture-perfect serves were due to luck more than my sense of direction, and with a lot of my misses it was hard to tell if I was aiming at the wrong spot or if I was getting hosed by the game physics. All in all I’d have preferred a simpler engine with more predictable (aka less accurate) results. 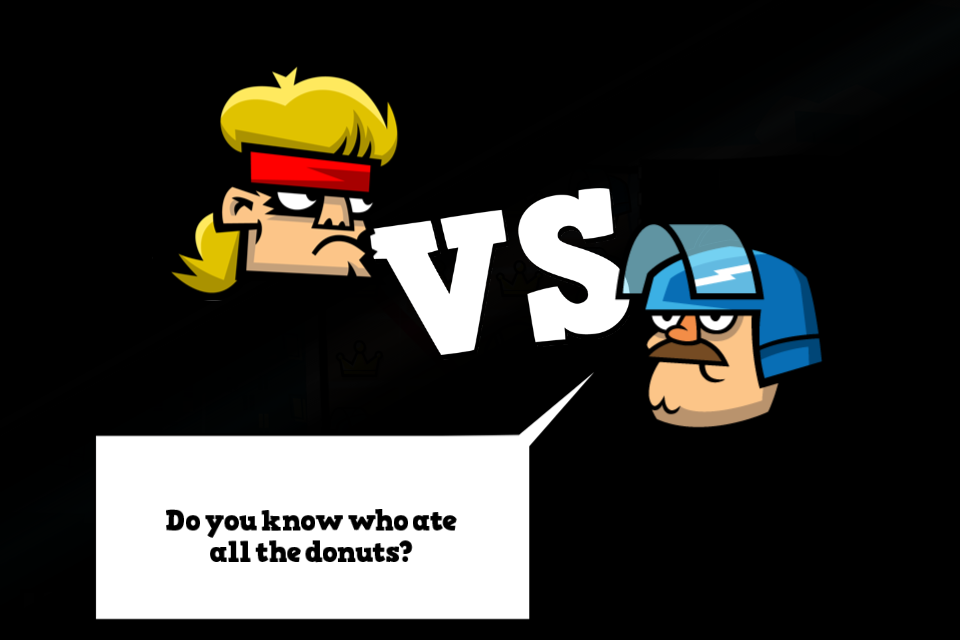 The menus, graphics, and animations are smooth. Tennis in the Face has a cartoon style that works well, and I didn’t have any problems navigating the interface or trying to aim a shot. It runs without any lag or performance issues on my iPhone 4S. I never had to deal with crashes or bugs, which is rare in a newly-released iOS game.

Bottom line: Tennis in the Face was fun, and while it doesn’t quite capture the magic of other (more bird-themed) iOS games, it offers a lot of content for your money. Hitting enemies in the face is quite satisfying, and the game offers enough content to keep it from being completely generic. So if you’re a completionist must-get-everything obsessive puzzle solver like me, then prepare to lose a lot of sleep over it.