The console and handheld markets have some strange differences, you know? With consoles, it’s often about graphical power, processing power, whether or not your power cable is long enough to reach your outlet, and other aspects of technological capability (despite the fact that a good PC can easily outdo the shiniest looking PS3). Handhelds, while on the surface very similar, cannot possibly match the ability of consoles, but they do have one distinguishing feature: portability. This has led to some interesting differences between the two system types. Multiplayer has had an immeasurably smaller focus in handhelds, since not everyone wanted to buy a link cable on the off-chance that they’d meet someone else with a Game Boy. Even with wireless technology, handheld games are still predominately single-player experiences. Perhaps this is what lead to the survival of titles like Lion King 1 ½ up through the era of the Game Boy Advance.

Two-dimensional platformers were the leading brand back in the day. From Mario to Metriod to Mega Man to Maybe Some Other Platformer that Starts with M, being a 2D platformer in the ’90s was like being a first-person shooter today. Not to say it was all glamorous, mind you; one needs only to witness the likes of many an Internet Review Show to know that there are more terrible NES platformers than spaghetti sauce in a certain Italian plumber. But they were Big Stuff then, and not so much now. Though we’re beginning to see a slight resurgence in popularity recently, being a 2D platformer last decade was sort of a novelty, like with Mega Man 9 and 10. But, unbeknownst to anyone who didn’t really care to look into it, the platforming genre took quite a while longer to die on handhelds, if it ever really did. While today the go-to genres for your standard licensed tie-ins are 3D beat-’em-ups, throughout the early ’00s we had many a licensed game that was a platformer, just like the old days. 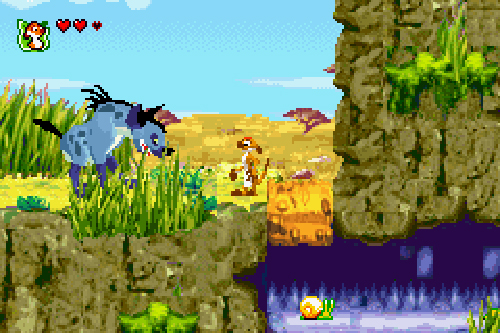 The Lion King 1 ½, a title I hope to repeat as little as possible because of its odd fraction deal, is a refreshing take on a simple platformer, yet not wholly uninspired. I mean, it was based off of an odd Lion King “inbetween-quel,” that’s already a bit of a novelty. You play as your rag-tag duo of African outcasts, Timon and Pumbaa, in a series of levels that roughly follow the course of the movie, though not to an extent that you would get lost if you haven’t seen it. Your general goal is always just to get all the way to the right, regardless of context, just like in the old days.

Getting all the way to the right isn’t a very challenging task, though. The game takes its time to get you acclimated, and it doesn’t really get difficult until more than halfway through. For added challenge, there are 40 collectable bugs in each level that, while still not EXTREMELY difficult to find, do add some good thinking to the otherwise simple level design. If you collect all of the bugs in a few stages, you’ll get the opportunity to play a bonus level, and if you complete that level, you get extra hit points—which is helpful, considering you only start with two. Doing so isn’t necessary for beating the game, but it is a nice reward for players who complete the game to 100%.

Timon and Pumbaa are both individually controllable in this game. In fact, each level has one of four designs: only Timon, only Pumbaa, Timon and Pumbaa separately, and Timon on top of Pumbaa in a screaming deathchase. Early levels feature just one of the characters, giving you opportunity to get used to their differences, as well as their individual strengths and weaknesses. Timon jumps very high and can climb around on vines to get around to places. He also can only distract some enemies, and generally has to avoid them. Pumbaa can’t jump higher than you could through him, but he can move rocks around to solve platforming puzzles. He can also defeat every enemy with his trademark eructation (which is a fancy way of saying he can kill all enemies by burping). The two complement each other well, particularly when you get to stages that incorporate both characters. 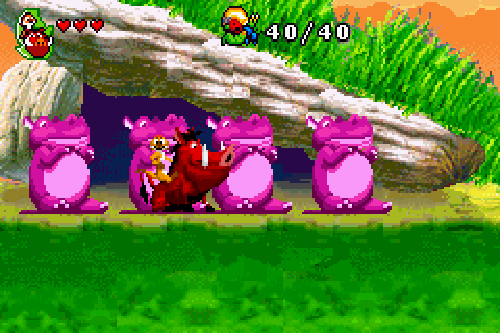 These collaborative stages are where the game’s level design really shines. Timon and Pumbaa are used together to solve platforming puzzles, whether it be pushing a rock with Pumbaa that Timon can then jump on to reach a point, or Pumbaa belching through a line of enemies so Timon can break down a dirt wall. Every time it feels as though the levels were thoughtfully crafted by the creators. Then toward the end of the game they start taking that away from you, presenting you with challenges you’re familiar with, but forcing you to tackle them without your other ½ seewhatididthere? These sections are just as enjoyable as the rest of the game, and they really show how well these people knew the mechanics they were using.

As for the deathchase levels: Whereas the other stages feature calm, thoughtful puzzle platforming, these take a more fast-paced approach. You can control your speed, but you are constantly propelled forward through the level. Now catching those 40 bugs is a combination of pattern recognition and reflexes…and memorization, after you inevitably fail. These levels serve as a nice break from the standard design, creating some fun tension. However, the developers got a little trigger happy with them later in the game, ‘cause they start showing up a lot more often, even when the concept has been dragged along too long. 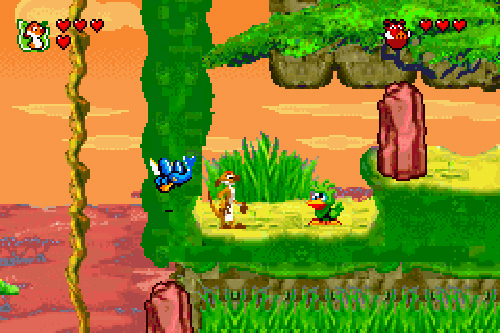 In all other respects, this game is pretty average. The music ranges from passable to slightly catchy, and the graphics are OK, though some of the 3D effects look like they belong in SNES rendering rather than Game Boy Advance. There are some clips of the movie you can unlock as you play through the levels, but they don’t have any sound and really don’t make any sense out of context. You’d be better off just watching the movie. The story is very minuscule, which is a combination of expected and odd, considering this is a platformer and a movie tie-in, respectively.

What sets this game apart for me is its level design and mechanics, and the way the developers use them to their full potential. With a concise 20 standard levels and four unlockable bonus stages, you might not spend a whole lot of time with The Lion King 1 ½, but what you do spend with it will be enjoyable. If you happen by a cart next time you shuffle through a used game bin, it may be worth your time.

Excluding that, it’s a good excuse to get that dang catchy Hakkuna Mattata song stuck in your head.

Hey look, everyone, the days must just be flying by, because here it is, the end of March, and it's time for another edition of "testgame.exe: Making the Adventure!" This month's testgame update is a