A dancing game that is marketed to theater geeks? It’s about damn time! I haven’t been this excited about a dancing game since I first tried DDR! It’s essentially Just Dance for people who like musicals. As soon as I got this game home I popped the disc in and hogged the Wii so no one else could play it (insert maniacal laugh here). I was hooked on it for three months. For three months I played this game to rid myself of the depression caused by not being in an actual show. It was a good time. Depressing, but good. 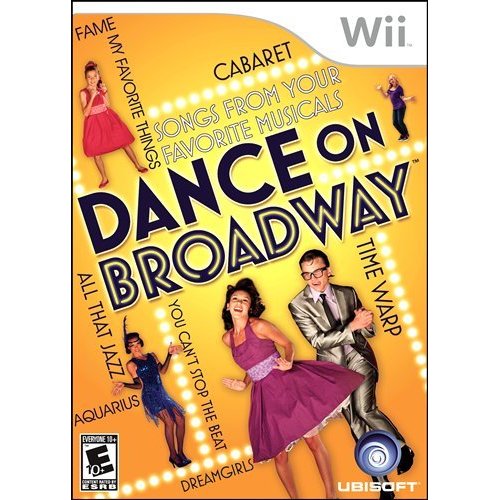 I don’t know what it is about this cover, but I love it. I think it’s the guy in front; he just looks like he’s having fun.

Most Just Dance games are for people who know they can’t dance. OK, that’s a little mean, but there has to be some truth to it. I mean, I own these games, and I can’t dance for my life. I did post videos of me playing though. 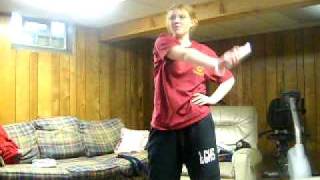 I set myself up for torment. I don’t even know why.

Dance on Broadway is set up like any other Just Dance game. You pick a song, pick a person, and then you mirror the moves of the people on the screen. One thing I really like about this game is that there are always four players. You can always have your own person, except the awkward fifth friend who doesn’t get a Wii-mote. That friend can go to the corner where they belong.

The downside to the game is that you can tell it didn’t have as much thought put into it as the Just Dance games; the song list is not very extensive, and the motion controls aren’t that great. The graphics are 3D figures, not like the filmed people you’re used to seeing in these kinds of games. The dancing is kind of repetitive, and at times slow and not very fun for a few of the songs. Another unfortunate attribute is the fact that when you get a high score, later on you can’t remember if it’s yours or not, seeing as you can’t put in your name and brag about being an awesome dancer.

The game is comprised of only 20 songs, which isn’t really a lot. I guess it is good for people who don’t pick up videogames that often and can only stand so much of them, but in my opinion there are so many good, upbeat songs that could be awesome in this game. There is also no real order to the songs. In the Just Dance games, there is an option to organize the songs by name, difficulty, or effort you have to put forth. Not in this game. They seem to just go, “Here, put these in… Yeah, don’t worry about order; they don’t care.” For some reason that just bothers me. 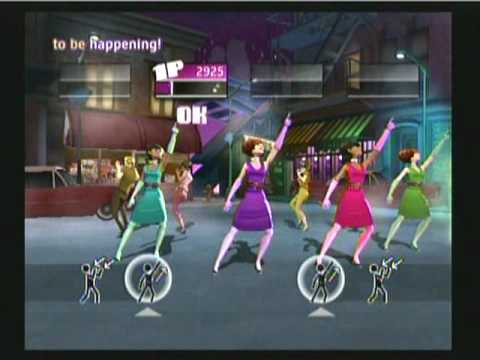 I see this picture and it reminds me of the dog from Up. “POINT.”

The last thing that is not so great about this game is the motion controls. No matter what you do, you will lose a lot of points for not doing the right motion. One way I’ve found to cheat this is by holding the Wii-mote in different positions when doing different moves. The loading screen tells you which way to hold it, but switching it up does help. It may seem really stupid, and it really, really is, but it still doesn’t detract that much from the fun of the game.

Now that I’ve ripped on this game that I supposedly like, it’s time to talk about the good things. First of all, I haven’t seen many good games for people who like musicals. That may be because people don’t immediately assume people who are in theater like or have time for videogames. If anyone else can find a game that does involve musicals, please let me know.

Another good thing is the music. Although the list of songs is short, they’re still good songs that you can dance to. Even if “My Favorite Things” from The Sound of Music is a bit of a stretch, most of the dancing is pretty fun and entertaining to at least watch, especially when your friend makes spazzmatic movements to “Time Warp” and gets the high score. Another thing I can say about this game is that the music is better than the music from Just Dance 3, but that’s just my opinion.

Although it seems like I’ve said more negative things about the game, it really is very good. The graphics are nice, not what you’re expecting from a Just Dance game, but they’re nice. If there had been more songs and the motion controls had been improved, the game would have been even better.

Paul: The atmosphere here at ringside is electrifying! Hello everyone I'm Paul Franzen, alongside "Captain" Eric Regan, and we're coming to you live, live, live from the DCW arena! Tonight's main even ...