GameCola readers (or “staff members” as we call them around here) might recall that I recently began a quest to complete all the games released as part of Summerbatch, a group of five indie games released together for the price of whatever you wanted to pay. I started with Barely Floating, an adventure game so bad it should have been called Piss. This week, I’ve moved on to PISS, an adventure game so average it should have been called Barely Floating. As soon as I started the game, I knew it was already a step above Barely Floating, as it looks like they actually had a real sprite artist work on the game, and not just whoever was the first person they could grab at the Hobby Lobby parking lot. And, despite its absolutely awful title, there were times when I found myself actually getting into PISS and oh man, I’m sure there is absolutely no way that last sentence will be taken out of context to haunt me in the future. Unfortunately, when you get to the actual adventure game part of PISS, you find out that it is kind of, well, piss, and the absolutely awful puzzles hold the game back from being anything particularly memorable.

You play as Moira, a down-on-her-luck mercenary/assassin/drunkard who has literally drank away all her memories in what is the absolute stupidest case of plot amnesia ever to have been forced into a videogame storyline. While Moira might be a little sketchy on her past, she does know one thing: Some dude owes her money. Apparently, she just finished a job for him, and she needs the cash to drink herself into a further stupor, because being so drunk that you’ve forgotten your entire past isn’t nearly drunk enough if you can still remember your present. Unfortunately, the jerk has gone and died before she could get payment, and we know this because the guy’s ghost literally shows up to tell her that he died and is refusing to pay her. Although, since Moira is in a perpetual drunken stupor, it’s entirely possible that what visited her was not a ghost, but just a really blurry version of his totally non-dead self letting her know she wasn’t getting paid because she showed up to work drunk and puked on her target. Either way, Moira needs to get her money, and it is your task to find out some way to do so. 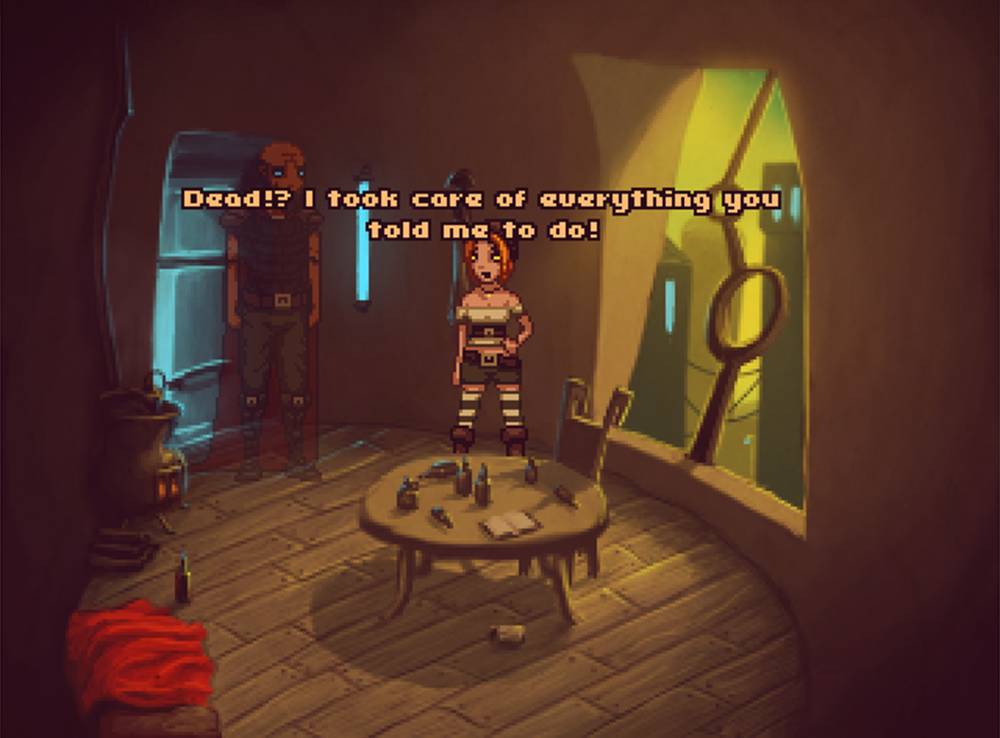 The story and writing in PISS are actually halfway decent. They’ve done a great job with world creation, really fleshing out as much history and lore as possible in a three-hour game, and I found myself clicking on every possible thing just to see what Moira had to say. The story is a lot more serious than what I’m used to in indie adventure games, but the writing is strong enough that it doesn’t come off as melodramatic or silly. It is on the short side and some of the dialogue does drag on for too long, but it is leagues above Barely Floating and most other indie games I’ve played.

Whoever wrote this does have a tendency to get a little too talky at times, going on for paragraphs about things that have almost no relevance to the overall plot. In most adventure games, if you come across a rock, the character will go, “Hey, that’s a rock”, or throw in some stupid little joke like, “Nice rock. A little too plain for my rock collection.” Here, if you come across a rock the narrator decides it’s time to jump on stage and wax philosophic about rocks and how they represent the inertia of man while the main character taps her foot in the background waiting to do something. There is also a really awkwardly written sex scene that reads like it was out of some bad Twilight (or Luigi and Daisy?) fanfiction, which is written too clumsily to have its intended effect. While I did enjoy the writing for the most part, the game seems to have been in need of an editor at times, as the author isn’t always the best at effectively conveying their points concisely.

While the story is interesting enough, there are some little problems along the way. The most notable of which is what I generously refer to as the “ending,” and only then because it chronologically occurs at the end of the game. Endings usually try to resolve whatever happened at the beginning and middle of the story, something which the ending of PISS has no intention of even trying to do. It seems more like we got to the game’s halfway point, but the developers ran out of either time or effort or desire and just tacked a “THE END” sign up there, hoping that, as long as they used that phrase, it technically counted as an ending. There is this sort of huge, random reveal about what makes the main character act the way she does, and then the game just sort of shrugs its shoulders and is like “uh, yeah other stuff happened after that.” It would be like if they ended Snow White right after she met up with the dwarfs, and there are these huge dangling plot threads that never get resolved. 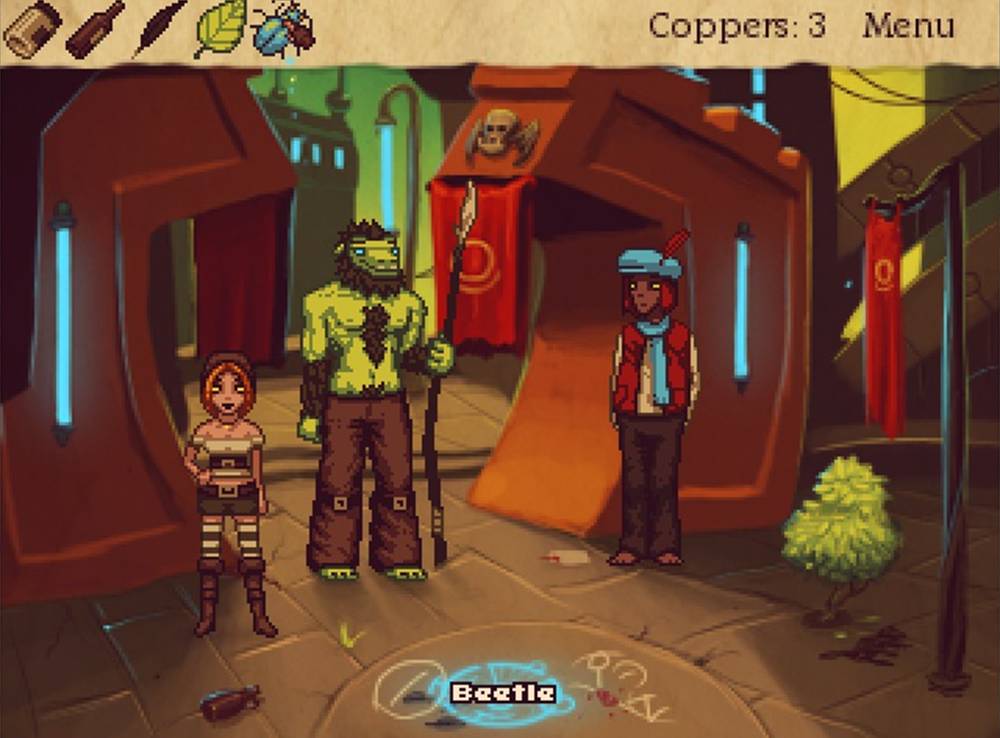 PISS actually has the opposite problems of Barely Floating, in that while the plot and writing are perfectly adequate, the puzzles are a horrendous mess that don’t even take the slightest amount of thought to solve. Nearly three-fourths of the game involve you accruing enough money to get certain things or get into certain places, which is less a puzzle and more of a shopping list. You earn money by completing simple tasks or solving rudimentary puzzles, and at times it just feels like you’re doing chores. Too many puzzles are just bringing objects from one place to another, and while your character is supposed to be some badass mercenary, the game treats her more like an errand girl.

The best part of the gameplay is actually just talking to people, and when that’s the high point of a game, it’s usually a sign that something else is terribly wrong. There are a lot of characters who have interesting things to say, and a lot of time it’s through talking to them that you get the money you desperately need. The puzzles are so weak that, at times, it feels like less of an adventure game and more of a choose-your-own-adventure game, since the most interesting parts of the game are the dialogue trees. I can’t imagine adventure game fans are going to be clamoring over this, since it sort of skips the whole game part to focus on the adventure. 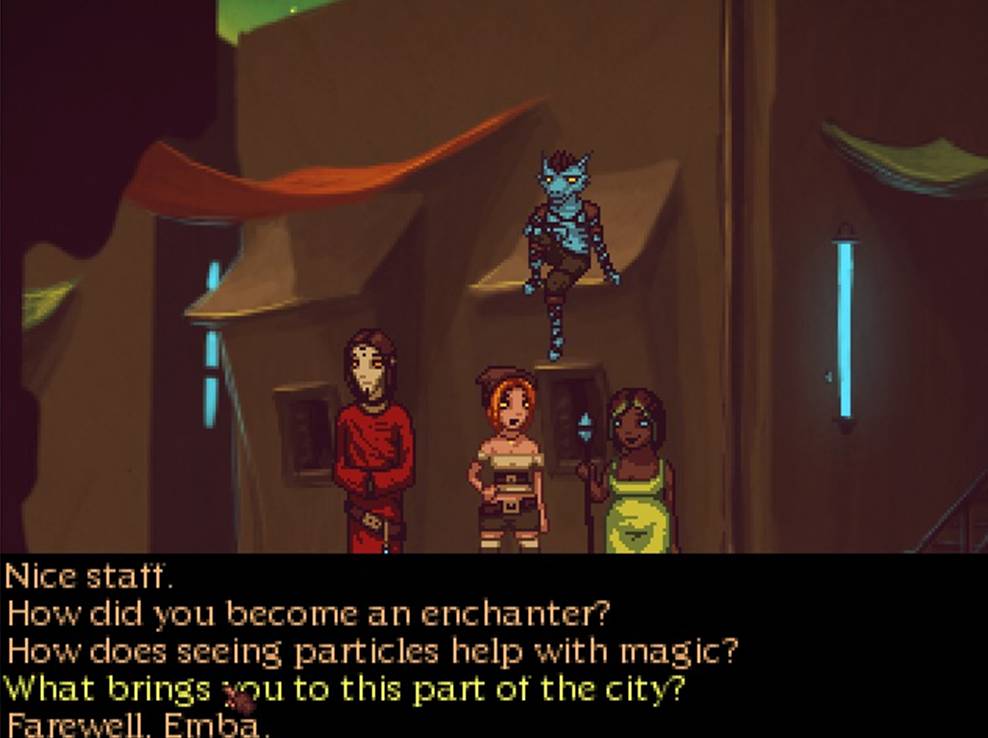 I learned something about myself in playing these first two games in Summerbatch—to me, the setting and story of an adventure game are more important than the actual puzzles themselves. Barely Floating actually had some clever puzzles every once in a while, but I couldn’t be bothered to care because the writing had put me in such a bad mood. PISS doesn’t have a single decent puzzle in the entire thing, but I still came out of it thinking it was a little better because I was at least interested in where the game was going. I’m not saying puzzle design isn’t important, because PISS isn’t exactly the kind of game I’d really recommend to anyone unless it was free (and according to this site, it TOTALLY IS and you can download it from this link!). The game at least got me interested enough to check out some of the developer’s other projects (their site is here), which can’t be said for Barely Floating. If you’re looking for an interesting (if unfinished) story with some fairly decent writing, then maybe take a chance on PISS. Be warned, though: The most difficult puzzle in the game is finding it on the interwebs.

DNN: See that castle up there? We need to get to that castle. Just climb aboard this giant antelope butterfly.