As some of you know, I’m involved with MAGFest, the Music and Gaming Festival. I’m a Department Head for the Consoles area, which this year had me in charge of supplying TVs, consoles, games, and other fun things for a space around 75% the size of a football field, for 9,000+ attendees. It’s…not an easy feat. For one, MAGFest does not accept sponsors, so we can’t really afford to throw money at problems. We’ve also been expanding at an exponential rate, so each year we have to work extra hard to keep up. The combination of those two things meant I had to scrape together an awesome Consoles area on a shoe-string budget, something I think we did pretty well. So here, both as a public service and as a form of therapy, I’d like to share some advice on cheap gaming that I learned over the past year. 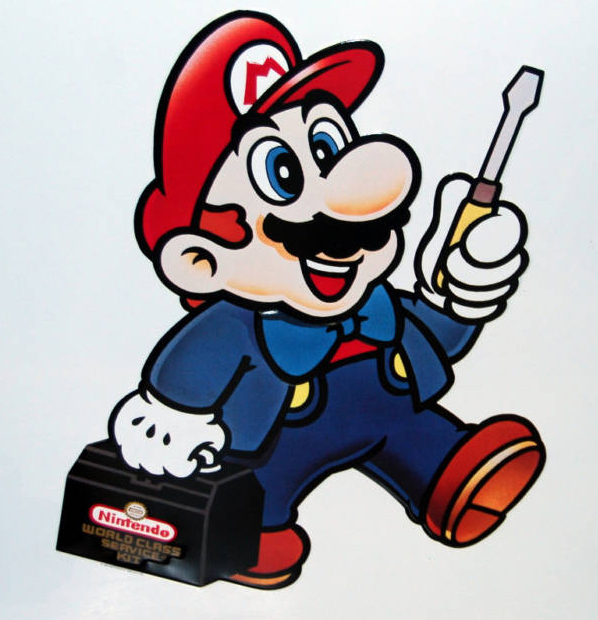 1. Learn How to Fix Things. (NOTE: This is mainly for us retro-gamers out there.)

Sure, MAGFest has a bunch of its own equipment, but before last year it was all in very tightly packed storage spaces, and getting into such spaces to do inventory/repairs was next to impossible. Earlier this year we started renting a warehouse, so we finally had a space where we could look through our inventory AND move around, which was a big step forward for us. Unfortunately, serious maintenance had not been done on the Consoles inventory since, well, ever. Not having enough money in my budget to send stuff out for repairs, I figured out how to do it myself. And you know what? It wasn’t that hard.

Vangie tells me I’m more technologically inclined than most, but believe me when I tell you that, at least with older systems, repairs are pretty easy. The faults with older systems have been extensively cataloged at this point, and with a quick Google search I was able to identify and repair the damage to MAGFest’s older systems. Nintendo and PlayStation consoles often require special screwdriver bits to open, but these are easily found online. Once you have them, you can quickly pop open those busted consoles and get to work. In general, the older the console, the easier it is to fix, as there are less parts to worry about. For instance, I was able to fix 10 NES’s over the course of a few days in my spare time, whereas figuring out how to clean and repair a couple of PS2s turned out to be somewhat more time consuming. The best advice I can give on fixing a broken system is this: Don’t be afraid of it. It’s just plastic and metal, and odds are if it worked once it’ll work again. All you have to do is a little research, then roll up your sleeves and get to work.

2. Deal Sites are Awesome and Addicting.

There are people out there who scour their local ads and the Internet for deals and then share them online at certain sites. These sites are your friends. My favorites for electronics are TechBargains, Slickdeals, and Cheap Ass Gamer. I’ve been clued into so many awesome deals from these sites I can’t even begin to count them, but be warned: These sites can be habit forming. One thing you learn after spending time on these sites is that new deal posts can come in at any time, and there may only be a few hours left on the discount. It’s rather disappointing to see a recently expired deal for a much anticipated item, so I’ve gotten into the habit of checking each of those sites a few times a day. It’s a quick check, at least, but it still makes one feel chained down. At least for MAGFest purchasing, I can comfort myself with the knowledge that I don’t really have a choice if I want to have a decent stock for my department.

3. Auctions/Craigslist Can Go Either Way.

As you may recall, Curt Schilling’s 38 Studios went under last year, and that included their subsidiary Big Huge Games, which was located just north of Baltimore. When I heard that their stuff was going up for auction, I thought it’d be a great chance to pick up some newer equipment for consoles, and for the most part I was right. We got three PS3s for $150 each, including controllers and cables, 30+ Wii remotes+nunchucks for about $8 each, some decent PCs for about $175 each, and a bunch of other stuff. On the other hand, the LCDs I was hoping to grab went for double what they were worth, and I got into a bidding war over the game collection, which I decided was not worth $1,400 due to the fact that it was half PC games I couldn’t really use (still…sigh…). So yeah, we got some good deals, but there were also some disappointments, and I had to take a day off of work to attend. If the idea of picking up cheap stuff at auctions interests you I’d definitely suggest checking one out, but temper your expectations with the knowledge that someone out there is often willing to pay way more than something is worth.

Craigslist is a similar beast, with items either available at a great deal or for much more than they’re worth. I’m sorry, person from Linthicum, MD, but your old PS2 with a few Madden games is not worth $200. The upside, however, is that haggling is not out of the question on Craigslist, and people are usually willing to accept a bit less if you’re actually at their place and willing to take the item there and then. This is all assuming you’re cool with going to the houses of random strangers with cash, obviously.

Quick side story: We managed to find 108 CRT TVs being given away for free by a company that does TV upgrades for hotel chains. The TVs were mostly coax-in online, and we had to pick them up ourselves, but they were in decent condition and the price was right. Just an example of the weird and wild things one can find if attentive.

I feel like when I was a kid, a game would come out at $60 and stay that price for a couple of years or so. Today, a game is lucky if it maintains its original price point for three months. If you’re willing to wait a little you can usually find games for $10 or $20 after a month or two, which can save you a lot of money in the long run. Of course, you might be able to find them earlier for those prices if you’re willing to buy used, but having as many friends in the game industry as I do, I prefer to support them by buying recent releases in an unopened state. My standards waver a bit once the game is a year or two old, as most of the money has been made off of individual games at that point, and the games are often unavailable from most retailers at that point anyway. So unless it’s a Nintendo game, which almost NEVER go below $20, you can find used games for $5-$10 during various sales and promotions.

5. Be Patient and Observant.

This is the most important bit of advice I can give to aspiring misers like myself. Unless I’m super addicted to a series (e.g., Pokémon, Legend of Zelda, etc.) I don’t buy it on Day One. Instead, I play the other games I recently got for super cheap and keep an eye on my deal sites for a nice price to jump on. In the case of MAGFest, it was a mentality I really embraced last year, as I realized there was no need to spend my budget all at once; instead, I spent it little by little over the year, getting the best prices I could find and stretching my budget as far as I could. It worked, too; this past MAGFest we had the largest, most diverse, and functional inventory we’ve ever had. Whether you’re buying games for yourself or for something, just relax and try to plan your budget out. The deals are out there; you just have to find them.

And for crap’s sake, don’t pirate your games. It’s just a dick move.

Once risen, twice shy. If ever it were to happen in real-life, then we'd probably be right in thinking that, when zombies and weaponry collide, the result is glorious bloody carnage. Case Zero deliver