Once upon a time in a beautiful castle… This game was tossed into the dungeon.

It may have been a Godsend that I couldn’t find my copy at first. Unfortunately, I hate myself and persevered in finding it in a desk drawer. My not putting it with all of my other portable games should have been a sign. It may just be my dislike of most GBA platformers, but I really detest this game most of all. The game used to call to me saying, “Play me! Play me!” I had to obey. 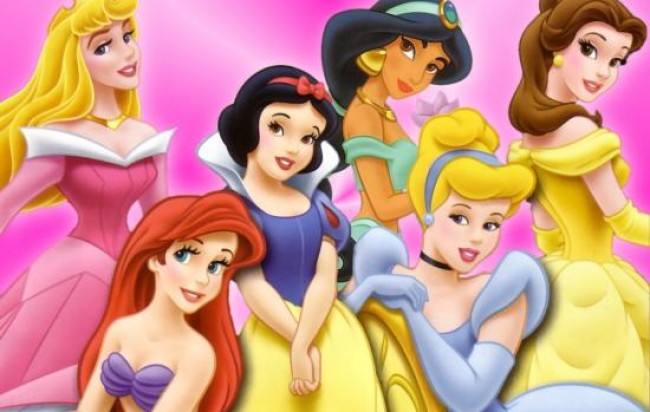 Don’t act all innocent; you know what you’ve done.

The game has six main chapters, five of which have three levels, and one has only two. The five that have three levels are all more or less the same. You’re either trying to get somewhere (“Exit, stage left!”), or you’re wandering around finding items to get you to the next level. These five chapters are set in the worlds of Beauty and the Beast, The Little Mermaid, Snow White, Sleeping Beauty, and Aladdin. There isn’t much of a difference between these chapters except the location, the character, and the boss. The challenges are a bit different as well, but they are still basically the same thing. 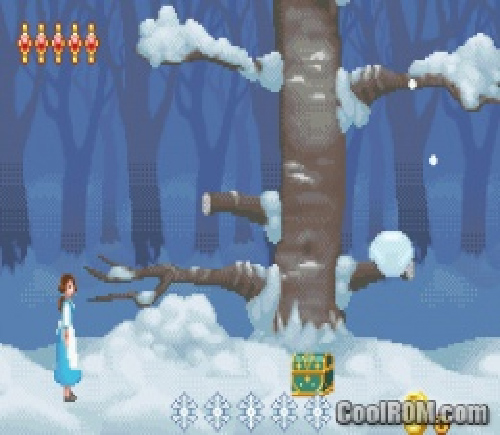 OK, how the hell is she not freezing? There had better be a coat in that chest.

But just as the heroine was about to defeat the evil that plagued her kingdom…she got a two-level chapter for Cinderella. Let’s get one thing straight: this level is stupid and annoying. In the first part, you’re Cinderella, just wishing you could go to the ball, but your evil stepmother is determined to make you stay home and do chores. When she calls for something, you have to go find it in one of the many rooms, and then find her and give it to her. While all of this is going on, Lucifer, the little pain, goes around the house scraping his dirty paws all over the nice clean floor. Paw prints will appear in the upper left hand corner of the screen to alert you when he does this. One way to get back at him is to hit him with your broom. This is the best part of the game as far as I can tell. Just make sure Lady Tremaine doesn’t show up and scold you.

After finding the diamond that, big surprise, Lucifer has, you move on to the second half of the level. This part of the game made me want to cry. It shouldn’t be as hard as it is, but it is. You have to hit buttons at the right time after watching the stepsister set the pattern. I hate these types of challenges since I have bad reaction times. This was the last challenge I had to get through before finishing the game. It took a few days, which is far too long to me. 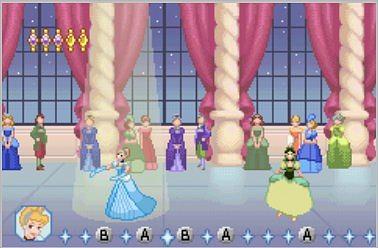 Why, Drizella? Cinderella has been nothing but nice to you. What a brat.

Once you finish all six chapters, a bonus stage is unlocked. The only way I can think to describe this level is like a disappointing birthday present, the kind that you didn’t want but feel obligated to use or wear. One by one the princesses come out, and all you do is catch whatever number of gems they tell you to catch. This is what happens with all six of them. WORST. PRESENT. EVER.

The game works with a password system, which is annoying, but makes sense I guess. The difficulty settings aren’t really difficulty settings so much as saying “Oh, you’re on easy, here are more lives” or “Oh, you’re on hard, you get three lives.” There are also “treasures” you can collect from some of the treasure boxes, but I think they’re just there to make you feel like you’ve accomplished more than you actually have.

The game basically reinforced my thoughts that Disney Princess games are not that great, especially if they’re platformers. It’s just not a good game. It’s boring after a few minutes if you’ve played it before, and if you haven’t, you’re wandering around wondering what to do or whether you’ve been in this screen yet or not. Do not let this game take you in. Resist!

And after the evil force had been defeated, the inhabitants of the kingdom lived happily ever after.

An early example of Nintendo taking the lead in 3D gaming!