Hello again, videogame aficionados and aficionadelles. It’s the Ominous Voice here, looking outside for spring flowers, and all I see is grisly rain and the unpleasant scent of partially defrosted dog defecations. Not sure when this snow’s gonna stop, but I think I’m going to have organ failure first. Pretty much guaranteed, that is. In the meantime, I’m stuck inside playing videogames and waiting impatiently by the mailbox for my cheque from the Prince of Nigeria. That guy took my thousand dollars and ran! And I only had a thousand dollars. Luckily, I can stay in Jeff’s house while he’s…uh, out…yeah…that sounds kosher.

Bet you’re wondering, “Hey, is that Ominous Voice gonna be angry about something this month?” And the answer is yeah, I’m pretty upset. Let me, quote unquote, “break it down” for you. I started playing Dragon Warrior VII this month. That game received raving reviews from all the major sources. GameSpot, GamePro, Official PlayStation Magazine, IGN (before they started to stink)…they all were raving about how marvelous Dragon Warrior VII is. Well, I got news for all those reviewers that received flagrant gift baskets with Slime plushes and kisses for their rear ends: it’s boring as staring at wood for a few days. And believe me, it’s a lousy time. I ain’t playin’ Truth Or Dare anymore with idiot woodsmen.

And you wanna know why it’s so boring? Well, I’m about 15 hours in, and most of the game is just a constant freakin’ fetch quest! Hey, talk to this guy! Then talk to this guy! Then bring a bubbly potion to the first guy! There is intermittent dungeon crawling, but they’re pretty damn short as far as game dungeons go. Most of the real fighting occurs just outside of the many ridiculous lost towns you have to revive and save, only so you can survive wandering around the NEXT town. But so much time is spent either a) walking around, getting the next fetch task taken care of, b) peeking in drawers to see if someone left a spare equippable pair of boxer shorts, or c) being so frickin’ confused that you just go and fight things to have a purpose. …Wait, I was talking about fetch quests. Damn fetch quests! 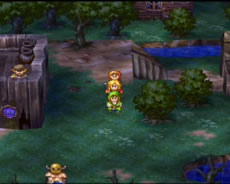 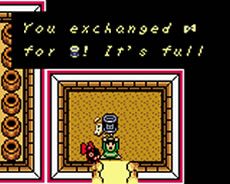 (Grab yourself for once, videogames!)

So yeah, I’m pretty ticked off about how Dragon Warrior VII is going. If the entire game is like this, I might as well drop the disc in a snowbank “by accident.” How the heck this became the highest-selling Japanese PlayStation game of all-time is beyond me. They must be very easily impressed over there with their sushi bars and giant Domo-kun statues in all them town squares. But we gotta remember that this isn’t the only game that suffers from fetch-quest-itis, if I could invent such a terrible name for the digital disease.

Anyone remember that part of The Legend of Zelda: Link’s Awakening where you have to basically take an item to each person (and I say person, but seriously, one of them is an artsy-fartsy hippo, so don’t even start with me), who exchanges it for another, and you have to do this, like, a thousand times. And it’s practically mandatory because that’s the only way you can get a magnifying glass to go to the library and read the small print about the final dungeon. What a frickin’ waste of time. Just offer the magnifying glass for an exorbitant price at the shop instead. I’ve gathered more than enough unused rupees over the course of my game to buy something ridiculous. I didn’t spend ’em all playing that worthless crane game run by that big-nosed weirdo! And the really sad part is that the characters don’t even want to really interact with you until you have an item they want. You won’t give me the time of day unless I’m carrying around a can of frickin’ dog food, eh? Greedy bastards.

Majora’s Mask was kinda like that, too, but they gave you a planner to keep track of all the crazy crap you have to bring from one person to another and at what time of day. More time was spent doing that than actually saving the world from a drug-addicted moon face slappin’ into the ground. Ocarina of Time was a little gentler on the fetch quests, but they did throw one in, just so you could get a gigantic sword that deals twice the damage…actually, that does sound good. The entire Mega Man Battle Network series seems to love doing this, too. Heck, in MMBN2, they didn’t even try to hide it, instead putting up a job board for you to grab fetch quests. When did we lose the will to simply play action games? When did we feel the need to insert menial tasks? If I wanted a game filled with fetch quests, I’d just stop playing videogames and take care of errands. And there are plenty of other examples beyond these, but I’m too busy waiting for that cheque in my mailbox to appear to remember any of them. C’mon, Nigerian royalty, send me those sweet, sweet naira…

Seriously—I had no idea a golf game could be this good.