CAUTION: Spoilers. And lots of them. But this is far too big not to share. 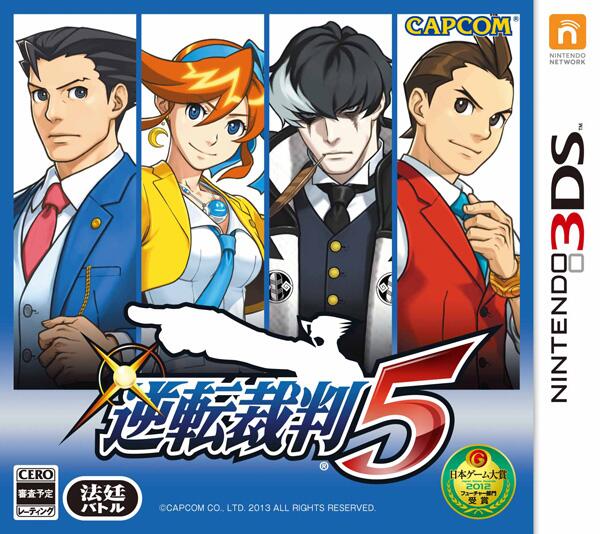 A few things you may notice:

1. Apollo has a place on the cover. Case 2 has been revealed to feature Apollo and Kokone (aka Yellow Coat) investigating “Kitsune’s Village”, whatever that is, and going up in court against the new prosecutor. Which brings me to my next point…

2. The new prosecutor. Pictured second from the right, his name is Jin Yugami and his crazy hair certainly fits in with the other lawyers in the series. 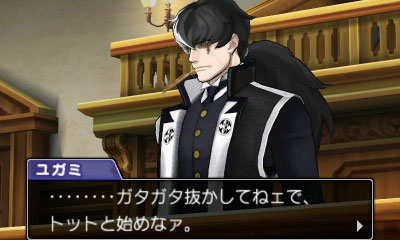 I’m guessing this means “Check out my huge ponytail” in Japanese.

But in all seriousness, I couldn’t glean too much information on him other than that he’s been confirmed as the rival prosecutor. The official Japanese site for Gyakuten Saiban 5 was surprisingly useless. I was at a loss until I checked my Famitsu source. And boy was I in for a surprise. 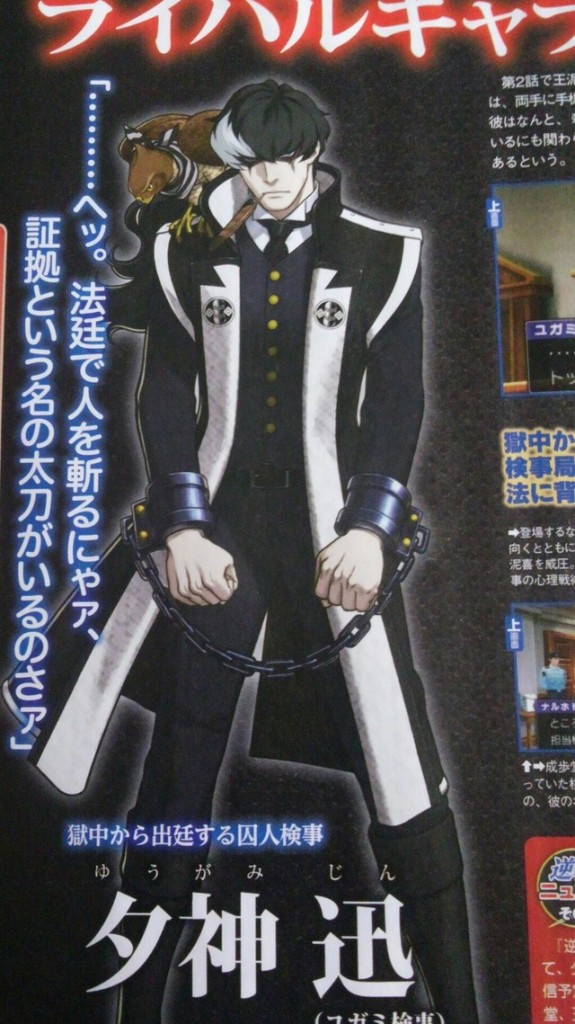 Yes, those are handcuffs.

Directly from Famitsu, “Although he is technically serving a sentence for murder, he has been ordered to stand in court.” Excuse me?!

This is going to be one interesting game, that’s for sure.

Also, as an incentive, DLC is available for this game with…you’ll never guess…different outfits for the characters. This is what we here at GameCola have been waiting for—fashion in Phoenix Wright. They include a sailor outfit for Yellow Coat, a casual outfit for Apollo, and Phoenix’s classic suit.

In other AA news, nothing new is available about Ace Attorney Investigations 2 or Professor Layton vs. Phoenix Wright (except for a projected release date on a Spanish website, October 13, but I’m not trusting that). The HD remakes of Ace Attorney 1 through 3 are projected to appear sometime this month, so keep an eye out for those. Finally, all the games except Phoenix Wright: Ace Attorney: Justice for All are available for really cheap (I’m talkin’ 20 bucks) on Amazon, so if you have no idea what I’m talking about, get on it.

That’s all for now. We’re getting closer, fellow AA fans!