The most interesting thing for me concerning Konami Krazy Racers is that it even made it out of Japan to begin with. I’m sure the only reason it did was because the Game Boy Advance was in dire need some games.

As mascot racers go, the game is as predictable as you’d expect. Characters compete in races to win trophies—pelting the opposition with inane weaponry and navigating awkward turns in the process.

Where this product shines is in the graphics and sound. Krazy Racers was released on the Game Boy Advance launch in Europe and North America. From the immediate outset, it showed gamers just what the Game Boy Advance is capable of—and alongside games such as Rayman Advance and Castlevania: Circle of the Moon, it helped build up a formidable launch line-up for the system.

In retrospect, there’s a lot this game could have done better. At the time, players were amazed by the presentation. Perhaps, however, the novelty of the having a decent grade mascot racer on a handheld system overshadowed some more poignant issues?

Indulge me in a game of Devil’s Advocate here for just a little bit. 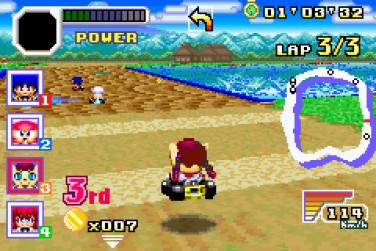 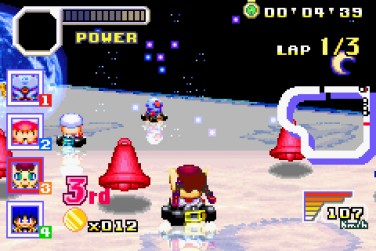 I like this game as much as the next person. However, I have some complaints with the implementation of some of the features.

What problems? Well… What about being required to complete tests to obtain better grade licenses? I know methods of padding out a game when I see them. You can only drive in more difficult tournaments when you have obtained the next license, which means clearing awkward time trials with very strict and challenging criteria. Surely getting a particular trophy is already evidence that I can try for a harder one? Why do I have to prove myself again?

If these were my only gripes, I wouldn’t have felt the need to write a whole review, so here’s some more.

Lacking a decent drift function, the controls can be quite unresponsive. Often my racer careens into the wall, with an almighty thud. I’ve played enough kart racers to know how drifting works, thank you very much. A little drift would go a long way. Steering is rather unresponsive, too. It’s like trying to turn in a Tony Hawk’s Pro Skater game with tightened trucks. Only an idiot plays with their trucks set to anything but loose.

Because of the awful physics, I make a meal of almost every corner in Krazy Racers. Sometimes other racers can drive straight past me with no explanation. What, are they just faster than me, or did they just magic a boost out of thin air?

Other times, I’m winning in a race without any challenge whatsoever; I even manage to over-lap some of the racers who are in last place. It’s topsy-turvy, without a clear boundary to the difficulty. Sometimes I feel like I’m not winning because of skill, but because the game has decided to let me win. I can’t get my head around it at all.

Course obstructions, such as baseballs or lightening bolts incapacitate me for far too long! I’ve gone from 1st to 6th in a matter of seconds thanks to a stray obstacle. Why do I never see the computer get hit by these? 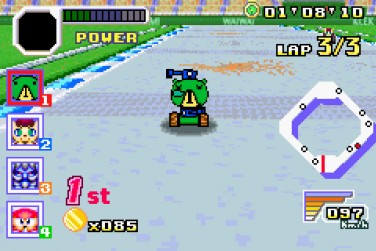 As with all mascot racers, the allure wears off pretty quickly. After I’ve played as most of the characters and raced a majority of the tracks, I then know what to expect. By that time, I’m losing interest in unlocking everything. There’s a fair bit to unlock, but no satisfaction for doing so. No real reward for it, in the long run.

The beautiful presentation and sound design are the only things that draw me back to the game. The music tracks are remixes of famous Konami pieces, and the graphics are drawn in a cute and appealing bright, colorful style. The backgrounds and courses are stunning. The character sprites may be basic, but they animate nicely and contain the expression and charisma that the characters have in their own respective franchises.

Konami has a history of bright and interesting characters, and the playable roster gives many of the heard and unheard a chance to shine. While it is odd to have the Castlevania series represented by its lead antagonist, the inclusion of Beartank from Rakugakids makes me relieved to know that Konami considers their one-off cartoon fighting game to be worth a respectful nod. His inclusion in this game is a tribute to their less well-known though equally as awesome franchises.

There’s a lot to love in Konami Krazy Racers, but as with all mascot racers, the allure soon fades. The title is still impressive over a decade on from its release, having aged considerably well. Fans of the genre are going to find something about this game that they are going to enjoy. I really doubt it’s going to be the mechanics, though.

Can’t be arsed to track this down? There’s also the remake available for the iPhone.

Warning: This article contains references to the Nancy Drew series that will most likely confuse non-Nancy Drew fans. Nancy Drew: Secret of the Scarlet Hand is not my favorite Nancy Drew game, but I h