I don’t have an interesting statement to start the review with, so here’s a screenshot of Lili de Rochefort as she appears in Tekken 6, being chased by three pigs from Wind Waker and a giant tank.

That image was created using Garry’s Mod. It is a completely open sandbox game, with the emphasis placed solely on you. There are very few rules, and the main goal is to have as little or as much fun as you’d like. Tools are provided for you to start out with, and the Steam Workshop provides oodles more content ripped from other games for immediate access. If freedom isn’t your bag, and you don’t like feeling as though you’re a kid with a sack full of cool toys to play with, then this will not appeal to you at all.

Although Garry’s Mod is technically a modification of the Source Engine, it doesn’t require Half-Life 2 to function. In fact, it can be downloaded and installed stand-alone. If you have any compatible Source games installed on your machine, the content is auto-magically transferred into Garry’s Mod to be used and manipulated to your heart’s desire. Say you have GameCola’s Most Innovative Game of the Decade, Portal, installed on your hard-drive—you’re free to poke around in the game’s maps or mess around with the character models and props. 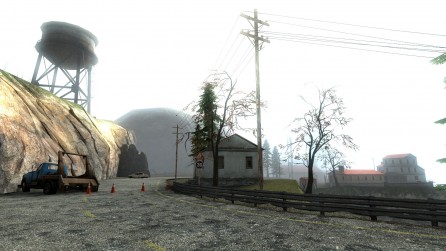 The most popular tools are the face poser and the ‘physgun’—which together will allow the user to pose characters in stupid ways and give them a ridiculous facial expression to match. There is much more to Garry’s Mod than just these tools; with enough engineering ability, practically anything can be constructed. I once took part in a football-style game where the players had to shunt a ball around with their gravity gun, and the court contained proper scoring mechanics. All of it was built within the game using various tools that come provided.

Learning to use these tools will take time and experimentation. Because the game doesn’t hold your hand through its features, it makes failure even more depressing for me. For instance, I’d like to construct a flyable vehicle that drops exploding melons, but I cannot figure out all the things I need to do to make my dream a reality. There are tutorials on the Steam Community, but they are poorly written and offer little in the way of actual help. 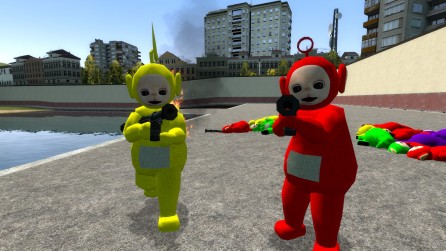 Over the hills and far away…

The Steam Workshop opens up Garry’s Mod immensely—allowing the player to download assets created by other users. Whether that be a working Pokéball for capturing NPCs, models from Sonic Generations with support for face, eye and finger posing, or a map taken straight out of Resident Evil 4, you can subscribe to a download and it will update automatically whenever a change is made. I did find the system confusing at first, because although it is implied that you can unsubscribe from within the game, it’s actually very faulty. Unsubscribing from within the Steam client works, and is the best way to go.

If you’re particularly proud of Sonic The Hedgehog’s new facial expression or the mess you’ve made of the local cemetery, you can save the scene to a file, or duplicate the rag-doll that you’ve posed. So long as you weld things together, you can duplicate just about anything. Duplicates (or Dupes) can be saved for ease of use later, so you can save your contraptions for quick deployment at any time. If you’re feeling brave, you can try out the Dupes created by the Garry’s Mod community. Most of these are no better than what I can make, so flicking through the list makes me feel a little less inexperienced at building things. 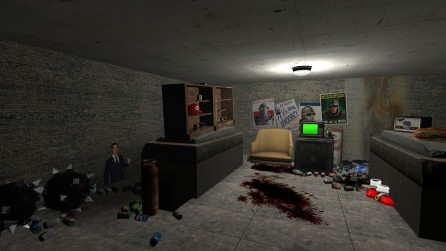 The freedom to create, manipulate and twist to your desire is all well and good, but Garry’s Mod doesn’t serve an actual “solid” purpose when it comes to playing a video game. The open-ended nature of the game means that you’re not given a checklist to complete (besides the Steam Achievements) and there’s no incentive to stop playing or continue playing.

You set your own goals, which can be disheartening and after a while plain boring.

So boring, in fact, that you may want to scream. 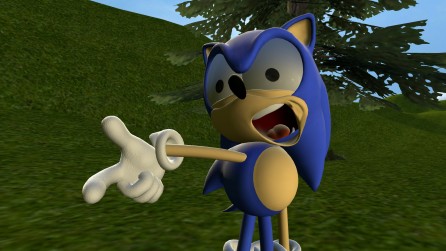 I know the feeling.

Garry’s Mod has therefore become my ‘limbo’ game—it’s the game I fire up when I’m not in the mood to play something else. It has become, if you will, my gaming screen-saver while I’m wading through my Steam Library figuring out what I’d like to play next. I’m not sure if this is really a good thing; with the freedom to download as many assets as I like, and have a full immediate selection of maps and characters, I find that I’m subscribed to so much crap. Well, you never know when I’ll need the cars from Sonic & Sega All-Star Racing or a ragdoll pack containing dinosaurs.

I’ve amassed so many subscriptions that I eventually ended up removing. After a while, I realized the game was nothing but a literal waste of space on my hard drive. With no clear goal or motive to play, I find that it’s a ‘chewing gum’ game. I play it because my brain doesn’t want to think, it just wants something to do over and over monotonously. 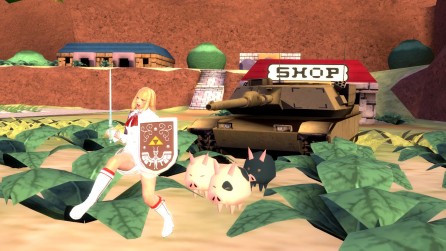 Steal from the shop and you PAY WITH YOUR LIFE!

With that in mind, I cannot necessarily recommend Garry’s Mod. In fact, I find it hard to give it any kind of score. In terms of being a sandbox game, almost every whim can be accounted for. But in terms of being a game, which you purchase with real world money, I feel there is little in the way of actual purpose or any worthwhile gaming content.

If you ever thought, “I’d like to see this or that happen in a 3D video game”, then chances are you can recreate that using Garry’s Mod.