When you think of the Nintendo Zapper, you probably think of great NES classics such as Duck Hunt, Hogan’s Alley, and Operation Wolf. But maybe you’ve played some others. Maybe you’ve been unfortunate enough to own Gotcha! The Sport. Friends, I am saddened to report that I am one of those people. But before we get to the game, let’s talk about Gotcha! the movie.

We’ve all seen on GameCola how horrible games based on movies are (although there are some potentially great movies to use), and this is no exception. Generally, games based on movies use successful blockbusters to dope people in to thinking, “Wow, Jaws was such a great movie. The game is probably just as good!” In this case, though, Gotcha! was an apparently awful soviet-era teen movie involving a Gotcha/Assassin college campus game, German punk rockers and some Soviet hooligans who are subdued by tranquilizer darts. I guess it doesn’t sound that bad, but it’s pretty clear it’s a flop if the movie grossed less than it cost. So perhaps to recoup some of the cost, they decided to make a light gun game. 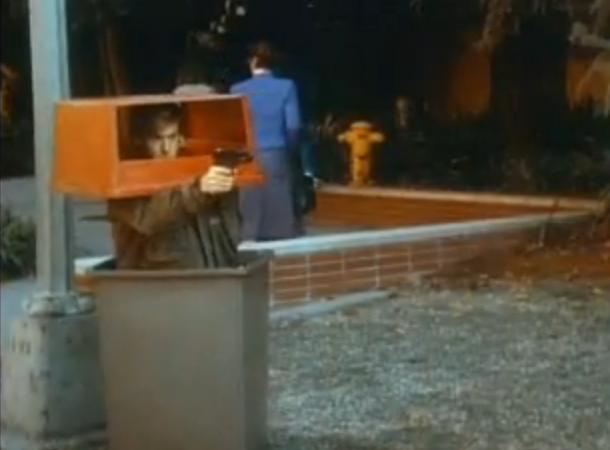 On second thought, this seems pretty bad, even for a low budget 80’s flick.

Well, enough of that dredge. Let’s get to the game. You’re in a paintball game where you must capture the enemy flag by scrolling all the way over the map, shooting the flag, and returning to your base. You have to avoid getting shot by shooting your enemies first, and collecting ammo by…shooting ammo boxes, because that works. You’ll travel through three stages: the woods, the city, and a snowscape. The city has punk rockers that closely resemble Bebop from Teenage Mutant Ninja Turtles, and the other stages just have random army fatigue guys. You’ll face an entire legion by yourself, but the true enemy here is boredom. You’ll scroll through these three horrible levels in a loop. You’re stuck there, in some twisted purgatory, just waiting to be placed in hell. You’re hoping for something cool, like a speed boost, a new weapon, maybe some wildlife? Nope, not happening. It’s just a boring gray title screen when you start up. Once you hit level one, be prepared for dull, dank music on a five-second loop that will stain your brain for years to come.

One thing unique about the game, though, is that you have to use a controller and the gun: you need to scroll left and right using the D-Pad and shoot with the gun. It’s not clear if it’s meant to be single player with you holding each with one hand, or if you’re supposed to get help from a friend. I helped my brother get to about level 30, he on the gun, and I on the D-Pad, until we both fell over from boredom. It might sound fun to do a cooperative shooter, but if you’re going to do that, do a co-op mission on Perfect Dark, or try the two-controller setup in Goldeneye.

So, yes, a somewhat unique Zapper game, so perhaps it is worth giving a sniff, but you’ll be bored to tears very quickly. But that’s to be expected with an LJN title.

We here at GameCola's crack news team are dedicated to searching far and wide for videogame news, but today I'll be daring to traverse the very time-space continuum to bring you news from several year