Empire: Total War is a brilliant strategy game that encompasses the setting of 18th-century Europe and her colonies perfectly, creating a rich and wonderful experience where you can dominate India as Great Britain, build a trading empire as Spain, or win the independence of the United States. That said, I’m not allowed to write a review of Empire. 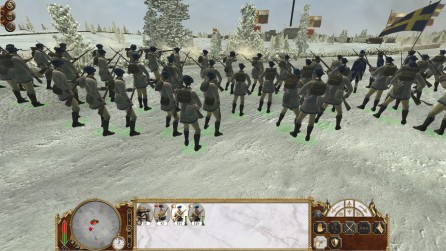 Only one game has managed to yank my attention away from Empire in the past week-and-a-half: an interesting little piece entitled Postmortem: One Must Die. In Postmortem, you take on the role of an Agent of Death whose objective is to take one life at a posh gala and set the fate of the nation of Galicia. 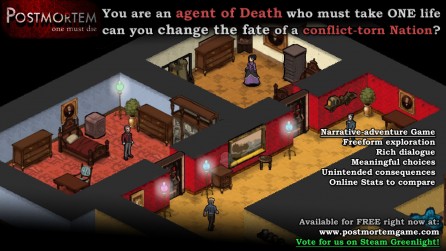 Hey! I just said that!

The game begins by setting you in an office building, where you are taught how to walk around and interact with characters and the scenery. A secretary you have to speak to explains your role and informs about the pseudo-civil war occurring in the northwest Iberian/western Carpathian nation of Galicia between the progressive, profiteering Newagers and the traditionalist, iconoclastic Oldagers. She explains that you are to be sent to a gala being held in the Galician capital to take a guest’s life and set the future of Galicia.

Once at said gala, you are to walk around, conversing with and learning more about the guests and investigating the assorted coats and papers you find around. At any time during the gala you can choose which of the guests will die, after which you learn how your choice impacted the nation of Galicia in its civil conflict.

Postmortem does an incredible job of making its characters, the nation they live in, and the conversations you have with them seem real. The huge, branching dialogue trees make it quite easy to get lost in a conversation, be it a discussion of women in the workplace with an anti-feminist or an argument over the introduction of automobiles with a glass magnate. The words the characters use, the clothes they wear, the certain ambience of the scenery all make you really feel like you’re in late 19th-century Europe. 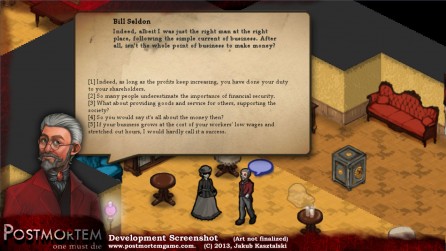 The graphics are high-quality as well. Each character, excepting yourself, has both an “overworld” and a “conversation” sprite. Said sprites look crisp and very well-drawn, although the rooms and objects around aren’t perfect, and the walls look frankly terrible. Very blocky.

Overall, the game is very good—certainly an interesting concept—but it’s just so short. Trying your best I don’t think you could make it last longer than an hour and a half, and for most it’ll take under 40 minutes. Which, of course, might be perfect for a short flight or whatever. Or maybe quick games are your cup of tea. Me, I tend to prefer longer games. Like Empire: Total War.

Shortness aside, Postmortem has one huge distinction to it: it managed to drag me away from Empire for a while. If you know me at all—and you don’t—then you know that that’s a near-impossible feat. Speaking of Empire, there’s a Russian city out there that needs conquering, so I’ll be taking my leave now. Try Postmortem out—except for some optional extra content, it’s free! Hej då! 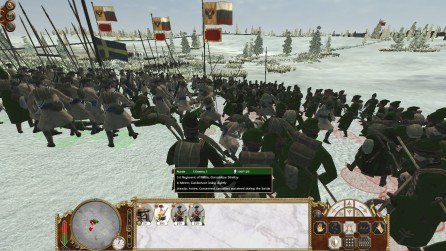 The crowd is on its feet, and our great fans can't wait to see what we've got for them next! Hello everyone I'm Paul Franzen, alongside "Captain" Eric Regan, and we're here tonight to bring you what i ...