Axis & Allies is a board game from Wizards of the Coast where players control one of the eponymous alliances of World War II. While not nearly as well-known as classics like Monopoly or Diplomacy, Axis & Allies has a pretty good following around the world, tending to be a fairly large draw at Gen Con. Devoted fans of the game created a fully independent website to honor and discuss Axis & Allies, which you can find here. 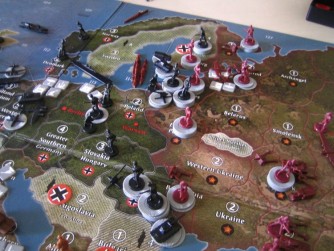 This is what a game of Axis & Allies looks like.

But I digress. The point is, Axis & Allies has an active, loving fanbase, and they’ve rabidly taken to the opportunities the Internet provides to play against other fans worldwide. Several virtual versions of Axis & Allies exist, from the 1998-9 Axis & Allies and its expansion Iron Blitz, based on the original Axis & Allies Classic, to the more recent versions which can be found at GameTableOnline. However, these options aren’t particularly enticing: the first is based solely on Classic and offers severely limited multiplayer, while the GTO version requires you to pay to play against other humans. I find TripleA, which I feel doesn’t qualify for italics [Editor’s Note: It’s a game name, I’m italicizing it], to be the best form of Axis & Allies available online. Created by A&A enthusiasts all the way back in 2002, it is available for download here for Windows, Mac, and Linux—completely free.

TripleA offers dozens of different Axis & Allies scenarios to play, from ones based off the actual WotC games to fan-created versions for the Napoleonic Wars, American Civil War and even Middle-earth. 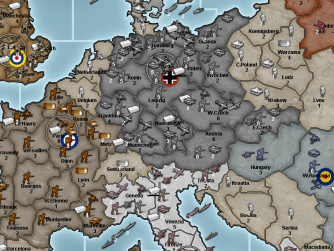 Whatever the scenario, the games all basically play the same as their root Axis & Allies, with minor changes here and there to befit specific scenarios. If you’ve never played A&A, it basically boils down to “use your armies to conquer as many territories as possible, then take the money you get from those territories and build more armies”. Depending on the version you choose, you can do this with tanks, or zeppelins, or wooden battleships, or cave trolls. Personally my favorite game to play is “Great War”, a setting based on World War I with eight different powers to play as starting with a total of 845 units.

Besides the numerous scenarios, what makes TripleA so appealing is online play. You can play live against other A&A fans or by email, what with Axis & Allies being a turn-based game. Plenty of players also use the interesting method of using A&A.org‘s forums to play as well.

I’ve been an avid fan of Axis & Allies since 2010, and I happily recommend Axis & Allies—and TripleA—to any turn-based strategy fans out there. C’mon, give it a try! You never know what you’ll think.

Observer: Jonathan turns around and comes face to face with yet another pack of singing seabears. It’s too bad Enrique isn’t around to fight them. Oh, and five or 10 of these seabears are possibly ...