This classic GameCola article was originally published in January, 2005.

Hand-Held Sword Apparatus that You Slash at the Screen in a Comical Manner of The Month:
Kenshin Dragon Quest

Controllers are so last season. In case you are unaware, the new, cool way to play RPGs is with a sword. And not just any sword, either. One made out of some sort of soft… stuff, so you don’t hurt yourself and others. Remember kids, playing with swords is fun, but hurting people is not!

This game follows the story of the original Dragon Warrior game for NES (re-released on GBC) and takes you through all of the original boss battles and adds in many more. In each level various types of 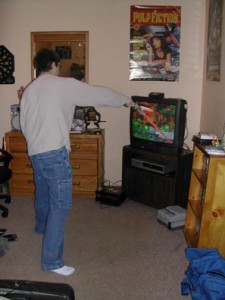 monsters will attack you by shooting, biting, slashing, and throwing snowballs, and it is up to you to block or deflect their attacks, and slash them to death with your trusty sword. You attack by slashing your sword at the screen, block by holding your sword sideways at the screen, and cast magic by bringing your sword close up to the console.

As far as the actual console goes, it’s a stand-alone type of thing. This game isn’t for PS2 or GC or anything like that, it’s just a single console with a single game. It runs on AA batteries and plugs right into the AV jacks of your TV.

There are only a couple possible downsides to this game. One being if you can’t understand Japanese, you may have a difficult time following the story. Of course, this won’t be an issue if you have played the original Dragon Warrior. Another issue is your arm may be sore after playing for a long time if you are an out of shape slob (I know this isn’t really an issue for gamers, but I figured I might as well put it out there).

The game is tons of fun to play, and a good break from the traditional game playing styles. There are other similar games out there, where you play baseball or football with a bat or ball, but sports games really don’t have anything on RPGs, now, do they? You can purchase this game for about $40 including shipping from lik-sang.com. You’ll have to wait a bit for shipping, as it’s from overseas, but it’s worth the wait.