Who’d have thought that the developer which dreamt up Disgaea, La Pucelle and this totally NSFW game with no hope of international release…would have made a jigsaw puzzle simulator? Originally, this game came out in 1995 in Japan, it was an early title in the PlayStation library. It shows. About as fun as real jigsaw puzzles, and no missing pieces. How fun a jigsaw puzzle really is, well, that is ultimately up to you.

I have to level with you—I love jigsaw puzzles. However, I don’t really think jigsaw puzzles and video games mix together all that well. This is madness! Jigsaw Madness. The joy of a jigsaw puzzle, for me, is being able to hold the pieces. Rotate them in my hands. Stare at the image and really get a feel for where the piece is supposed to go. A virtual jigsaw puzzle doesn’t have that same feeling. It’s not there, in your hands.

But you can’t fault Jigsaw Madness for trying. Because the game is controlled with a pad, there is bound to be a certain stiffness to it. But there isn’t. I’m astounded by that. Jigsaw pieces stick in place to the game grid, so there’s no fidgeting trying to get the piece arranged properly. It doesn’t make the game “easier”, no, it makes it acceptable. When you’re working with a lot of pieces, the grid snapping comes in very handy indeed. 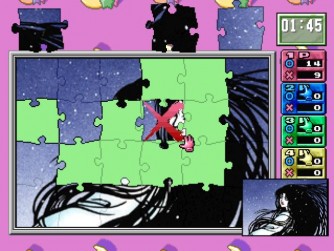 You can play any one of a hundred and fifty jigsaw puzzles, each within a certain theme. Each puzzle can be played with either 24, 96 or 150 pieces. You can turn the guide outlines for pieces on or off, and play with rotated pieces or not. There is a lot of choice, and I admire that. While you only have access to a few loose pieces at any time (you have to discard them if you want a new piece) and the screen space is quite crowded, it is still an enjoyable experience.

There is a lot of content here. Besides puzzles themselves, the game also has a small but brilliant soundtrack. The music that plays during a puzzle is wonderful. I’m listening to it right now as I type this sentence. The multiplayer modes are, as far as I’ve heard, the best parts of this game. Unfortunately I have nobody to play this game with me, so I cannot comment. 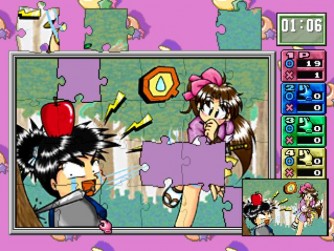 Although the game remembers the puzzles you’ve completed, there is no save function. This means that if you want to track game progress, you have to make yourself a chart. While I do think that the inability to save can be considered an artifact from when the game was originally developed, I do also appreciate that using up a whole block on a PlayStation Memory Card for this game would be a waste of space that could be better used for a more important game.

Although, given the age of the re-release, would it have hurt to add save functionality? XS Games had time to add multiple languages to the game. Actually, the game doesn’t have support for analog sticks, but at the very least you can still play it with a Dual Shock controller. It isn’t a complete let-down, but when you’ve got the game code in hand, why not go to town on it and provide some worthwhile additions?

When you’re completing puzzles, you can explore the Exhibition Mode. It is a gallery that allows you to view every picture in the game. We all know the real reason why Exhibition Mode exists, now don’t we? The aptly named “Hot Spring” gallery might “revitalize” you after a hard day of puzzle piece matching. 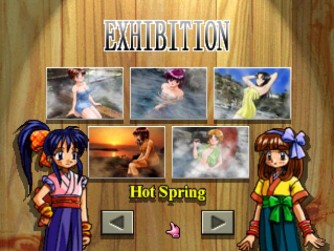 I was relatively blown aback by Jigsaw Madness. I procured this game for the sake of adding another game to my endlessly expanding library, and also because it was cheap. I wasn’t expecting it to have decent controls, acceptable presentation and excellent music. I didn’t even realize Nippon Ichi Software had developed this game until I saw their name on the title screen.

Truly then, I must pass on this knowledge to you now. Jigsaw Madness is an accessible and relatively enjoyable game, particularly more so if you enjoy jigsaw puzzles. Every facet of its construction seems to convey a welcoming feeling, and it has done more than required to earn a spot in my PlayStation collection. 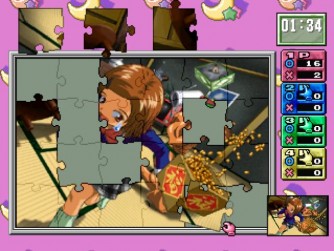