Let’s talk about the legendary Dick Van Dyke. He’s an acting star, who played a chimney sweep in Mary Poppins. So, in other words, he is a…

This game is StarSweep, or Star Sweep in America. You couldn’t have it all one word, you see, that would just be sacrilegious or something. The Japanese box art tells me all I need to know about the game. It’s cute, it’s cute and it’s cute. What else could matter in this world? Now you guys, you got a pretty good cover too. It’s not a patch on the Japanese cover, but at least it somewhat still tells us about the game. It tells me that there’s a cute character in the game. I mean, that’s reason enough to buy it, right? There’s even a brain symbol there, to tell me that playing video games will make me more intelligent. It’s a no-brainer, if such a thing even exists. 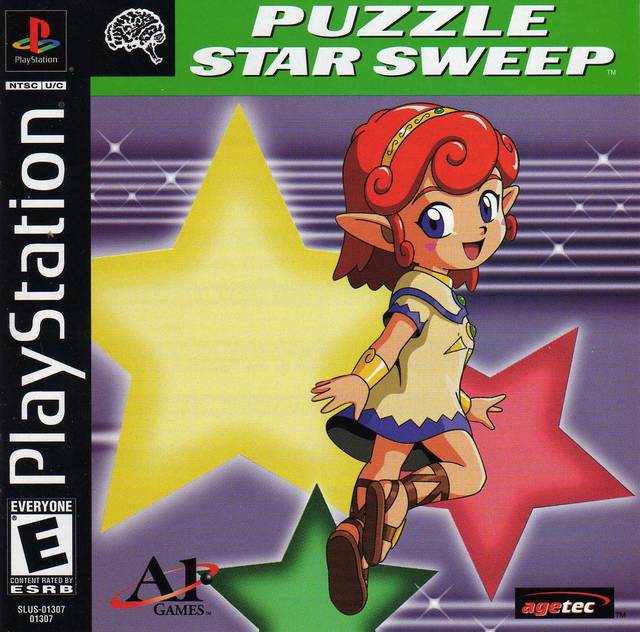 Now, Europe’s cover really does speak for itself. Please tell me how this Tetris-abomination is meant to represent StarSweep. I’m waiting. 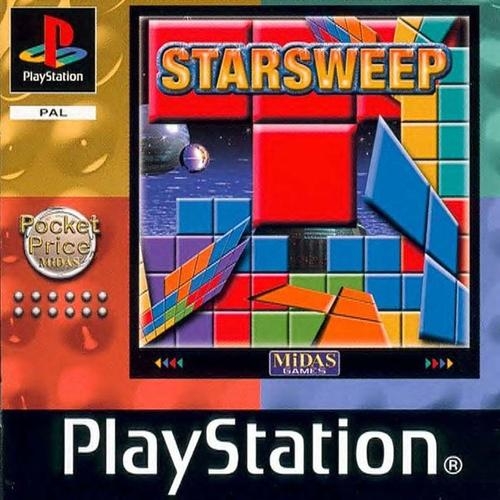 Why is there an ocean and two moons? Why do the blocks appear larger and smaller, with odd perspectives? It was a sure miracle that I bothered to pick up StarSweep on a whim. If I’d known the game was half-way near decent, I’d have purchased it in a heartbeat and long, long before I actually did.

Who would, in their right mind, buy this game brand new if it had a cover like this? Nobody would. No-one. I was so close to missing out on this game and never getting a chance to play it. If they hadn’t been so cheap in my local retro video game retailer, on that ever so fateful day, I’d have never walked away with Jigsaw Madness or this game. 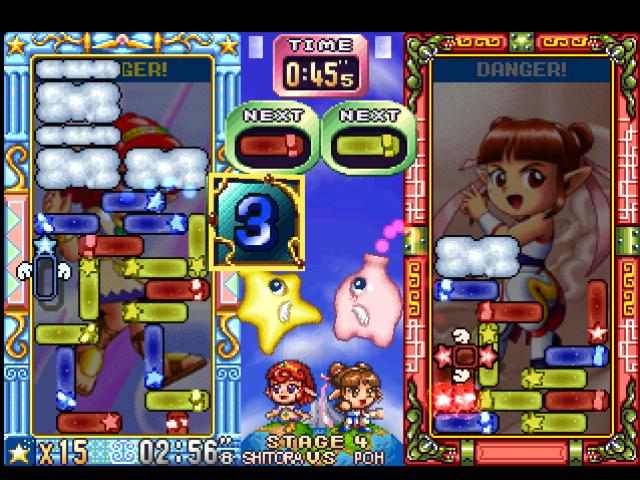 So, StarSweep is kind of like Panel de Pon, or Tetris Attack if you prefer. The goal is to destroy the coloured blocks on screen by having a starred end match with a starred end of another block of the same colour. Meanwhile, the screen is constantly scrolling up. If you keep the DANGER! bar filled up for more than three seconds, you lose. Performing combinations will send cloud blocks to the other player, who can remove them only by destroying any coloured blocks touching them.

The game is relatively simple. The challenge, however, comes from the speed. Nearing the end of the game, you need to employ some very quick reflexes and immediate thinking. Your opponents can construct combinations faster than you can, and they can construct them better than you can. Perseverance will get you through but you’re in for some hard times.

The dialogue in StarSweep is horrendous. 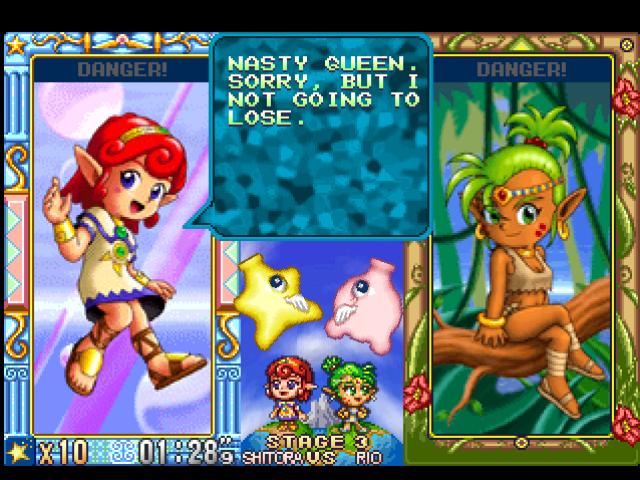 You not going to lose, huh? The dialogue is full of spelling and grammatical errors. The actual story doesn’t fair well either. Who can forget getting hit on by a cat? Or love-at-first-sight with the “typical bishie”? Such is the joy of poorly translated B-Games. You know, like B-Movies. No, not the Bee Movie Game. Maybe another time.

I’ve mentioned that the game is cute. I have, right? Well, the presentation is very slick too. I like the dotted effect in the text windows, the little character sprites onscreen, and the high quality character portraits. The menus themselves aren’t half bad, either. On the other hand, the ending sequence is what I’d presume a bad trip to be like. I haven’t actually experienced one so I wouldn’t know. Imagine that the following sequence is combined with some mediocre J-Pop music. 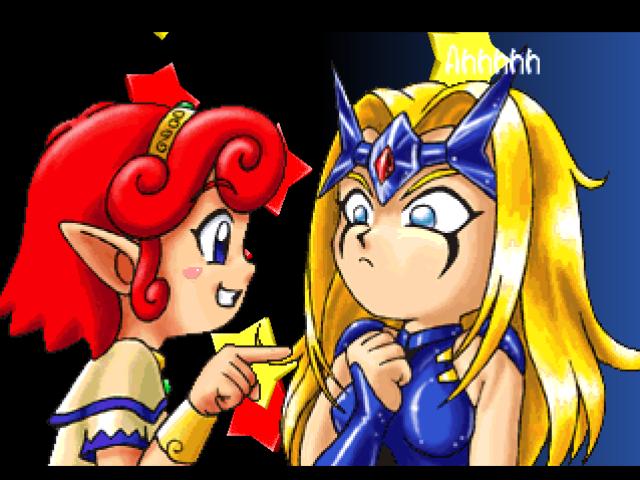 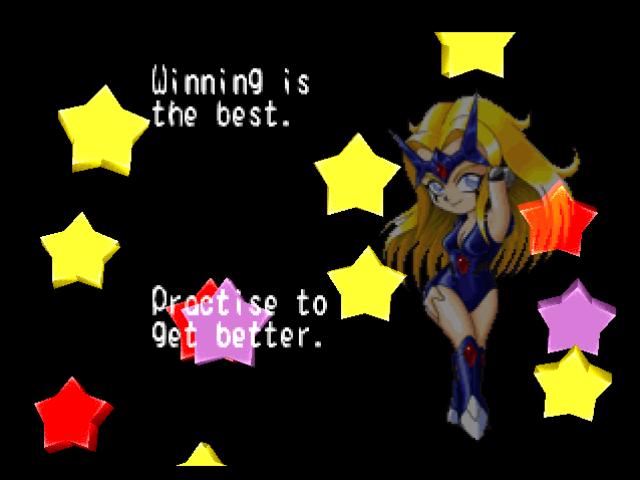 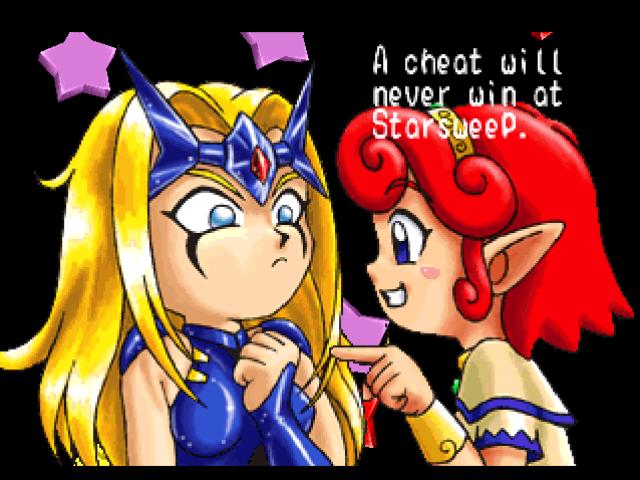 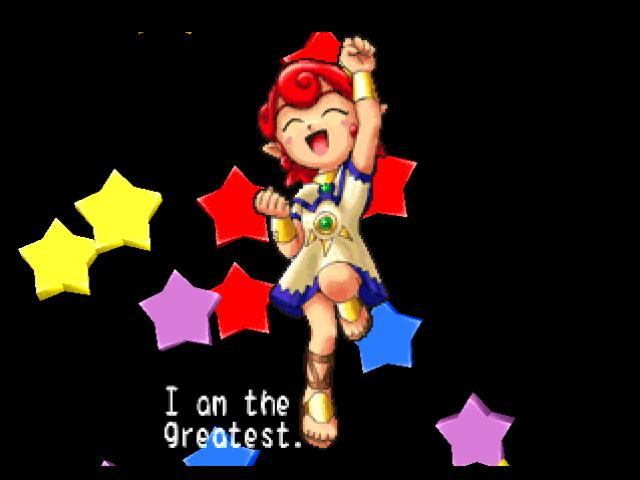 I also want to mention the unlocking system. Completing the story mode and other challenges will net you Star Pieces. As you collect more of these, you can unlock a new mode and the ability to play as any character from the game instead of just Doh. Yes, the girl with the red hair is named Doh.

So there is a wealth of content here. It is addicting, too. The first time I popped this game into my PlayStation 3, I wasn’t done playing until well past the Witching hour. This game should come with a warning. You will lose sleep.

The fast-paced nature of the later levels in the single player modes, combined with a fantastic soundtrack and beautiful anime visuals, result in a game that I would frankly recommend to all puzzle game fanatics and PlayStation game collectors.

Budget titles can actually be pretty good. Who’d have thought? 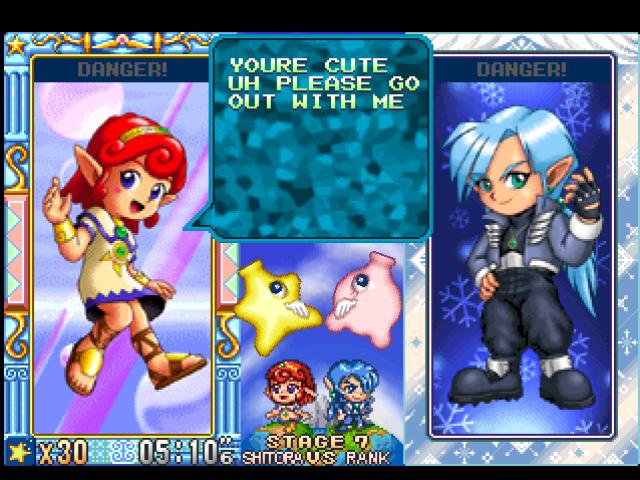 Wall Street Kid is horrible. End of story. What's the first thing you think of when you think of the stock market and investments? For me, it's the classic red/green scrolling ticker tapes, and histor