Well, well, who have we here? Another GameCola visitor who got lost trying to find the latest D&DCast in hopes of figuring out what a D&DCast is? Don’t worry; I’ll keep you company while you get your bearings. They call me the Ominous Voice. I’m pretty much a voice, though moderately ominous at best. I hide out here in my dingy office under the light of a six-watt bulb and write for what little pay GameCola Corp. has to offer. Those ads on the sidebar really aren’t doing anyone a lick of good, especially me! I had to save up for several months to afford a frozen burrito! Luckily, I really don’t eat much, being more of an ethereal spirit than a hungry waif. I gave up that lifestyle a long time ago…

But you’re not here to listen to my torment. You want to know what I’m all about, eh? Well, sit yourself on that dilapidated stool over there and I’ll tell you. I talk about what’s wrong in video games. Oh, indeed, we love to hop, skip, jump, and stomp the skeletons out of helpless Goombas and gremlins with pointy spears. That’s all well and good. No problems there. I’m talking about the ridiculous aspects: the monotonous tasks, the nonsensical inclusions, the inconceivable irritations! Seeing those in video games is like sitting on a freshly-sharpened cactus. And even if I actually had a rear end, it would still feel better than having to play through some terrible tropes.

You wanna know what grinds my toaster oven this month? I’ll lay it out for you! I’m asking what the deal is with stupid floating islands in video games. I’m absolutely amazed at how many video games have floating islands, typically (but not always) inhabited by the primary antagonist of your tale. Obviously, we’re now learning that a static landmass in the sky is a poor choice for a fortress because, no matter what, the hero will assuredly find their way up there and give your backside a firm whoopin’! 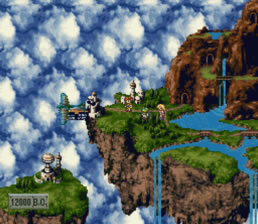 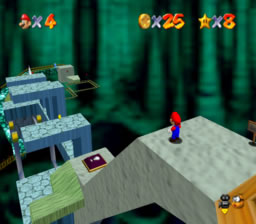 (These islands are held up by the power of friendship!)

Let’s look at the obvious fortresses of doom. The first Lufia game definitely has one. In fact, it’s actually CALLED the Fortress of Doom! (Maybe that’s where I just stole my quaint phrasing.) Not only that, but you actually START the game on Doom Island itself! Clearly, that place will be as penetrable as Swiss cheese in my ham fantasy, so why even have it up there! Might as well keep it on the ground and save propulsion fuel costs. Think efficiency, Sinistrals! And what about Crystalis? The opening animation shows that the surviving people of the post-apocalyptic world built a tower holding enough firepower to destroy the world as a means of preventing future problems. But you don’t need a quarter of a brain stem to know that you’ll go up there at some point. And if some purple-haired cryogenic stranger can make their way up there, why even bother to create that tower? Or at least build a better defense system. Chrono Trigger was another example. The town of Zeal was basically a society hanging in the air in 12,000 B.C.; how they managed to develop this impressive work of art is another mystery. I’m thinking magic. But WHY it is floating is a total mystery. I’ll bet those Zeal wizards were just showing off!

Mega Man 2 also had a floating world of sorts. Air Man’s was assuredly in the clouds, and I doubt Wily propped it up with a birdhouse pole. Of course, since Mega Man can pretty much warp anywhere he needs to be, there was really no point in putting that base in such an out-of-the-way location. He might as well have put it in Dr. Light’s azalea garden! And here’s an odd thought: so many Mario levels can be found on what I (the Ominous Voice) consider to be a floating island. Why is it that, if you jump off the edge of any Super Mario 64 level, you just fall into endless space? It’s definitely some sort of strange landmass whose exact location isn’t easily determined. And games like Super Mario 3D Land have the same issue: in some random levels, what exactly is below you? Or above you? WHERE ARE YOU?! How do platforms stay in place at all? And while we’re on the subject, where exactly is the Rainbow Road? That, too, is just hovering in mid-air. NASCAR sure had some extra millions to burn!

Dangit, I barely have enough time to even scratch the surface of floating islands! Alright, you: get off that stool and start typing in everything else you know about flying ground chunks into the comments section and get the ball rolling. I have to lay down for a few weeks before I can start thinking again. That takes up WAY too much energy for one being. And, being pure energy to begin with, I need all I can get. Be gone!

As I have made clear many times within this virtual realm of GameCola, I am absolutely terrible at video games. This has been confirmed again recently when I combed through the list of games I own, a ...