It’s the middle of winter and here in the United States that means only one thing! Not Christmas, no, it means Football! The Great American Passtime is taking over airwaves again, and we’re smack dab in the middle of Football Season! Really, I couldn’t care much about Madden, NFL 2k, FIFA Superbowl ’13, NFL Blitz, or any other game based off of Football that exist. Well, except for one. It’s a game that has deep strategic elements, a variety of different teams each with a different style, different play styles within the teams due to player configurations, and a fantasy twist. This is the Old World Passtime of Blood Bowl. 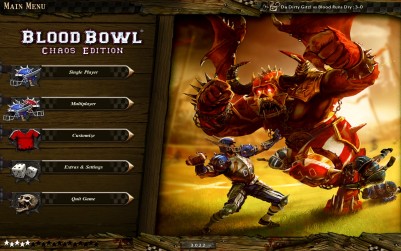 Blood Bowl: Chaos Edition is the definitive Blood Bowl videogame experience. It’s a Football strategy RPG based off of Games Workshop’s Warhammer Fantasy franchise, and currently headed by their Specialist Games branch. You take the role of a coach and play a team of humans, elves, orks, dwarfs, goblins, ogres—well the list keeps going on and on but there’s a great variety to the teams and their compositions. There are two types of teams: the one that plays actual Football, and the one that focuses on murdering the team that plays actual Football. With these distinctions, however, also come teams that don’t fit into both categories in strange ways. All of this makes for a strategy game with a wide variety of tactical options. 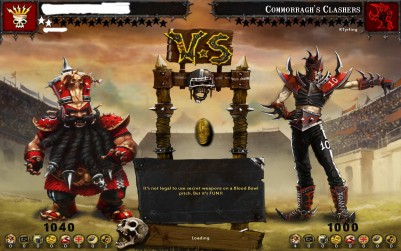 The Big Hats versus the Punk Rockers!

It plays like a grid-based strategy RPG similar to Final Fantasy Tactics or Disgaea, with the addition of a time clock for your turns and Football elements. Your teams usually consist of Blitzers—Meant to assault the enemy team and create an opening for yours—, Runners—Meant to run the ball through the enemies and into the endzone—, Throwers—They throw the ball ensuring that Runners get it—, Linemen—Meant to fill a slot, these guys are the most versatile players with no strengths or weaknesses so you can build them into any role—, and Big Guys—Really strong, really slow, and usually really dumb, these guys are meant to punch a hole in the enemy’s team and get the Blitzers through especially strong lines. Some teams have fewer options, some have more, and some have entirely different options, but they all fit into this basic theme. With these similarities, the teams are still different enough because, like RPGs, the players have statistics like strength and agility to differentiate them as well as skills which give them greater capability. 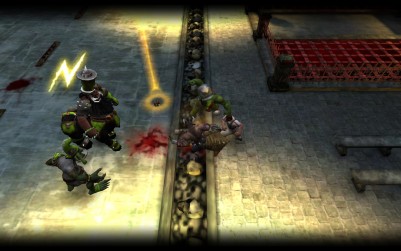 On the Football side of things you’ve got a Career Mode where you bring your team from the bottom all the way to the top, fighting classic teams from Blood Bowl history. You’ve also got a Tournament Mode and a Quick Match Mode. You can export teams you made in Career Mode into the Quick Match Mode to play against your friends in hot-seat multiplayer. There’s also a Story Mode where you’re a coach that works for various teams at different points in Blood Bowl history. Really, the only mode I’m here for is online multiplayer through the game’s provided servers which offer various public and private leagues to play. 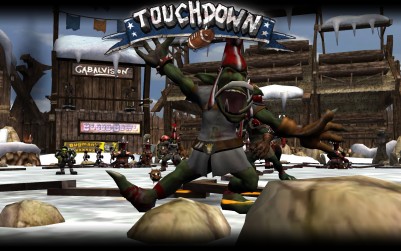 An essential part of the Football experience: The touchdown dance!

The AI is pretty thick however, seemingly built to not actually play the game. The mechanics are obtuse, and explained with the assumption that you know how to play Blood Bowl already. There’s a real-time mode that’s pretty lackluster and takes away the strategic depth of the game, and an expanded mode that adds unnecessary book keeping to the experience as well. To make matters worse, the commentary is repetitive and the commentators will often repeat the same line twice. The graphics are pretty good, despite what my Neolithic screenshots suggest, but they’re comparative to early 360 graphics even on the highest setting. 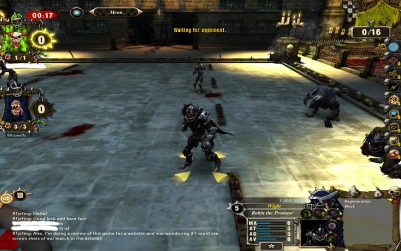 Players are given random names, but you can also rename them.

My biggest concern is that the game’s random number generator doesn’t generate random numbers as necessary and stores the strings in advance, resulting in a series of unfortunate failures followed by player deaths. Worse, the AI seems to be aware of the outcome of many of its rolls and will attempt to mitigate horrible losses. Perhaps the worst thing, though, is that the AI teams in the Career Mode are never inconvenienced like you are. If you kill a heavily upgraded player on an AI team, they’ll replace them with a player of the exact same experience level—Wouldn’t it be nice if it worked like that for you? 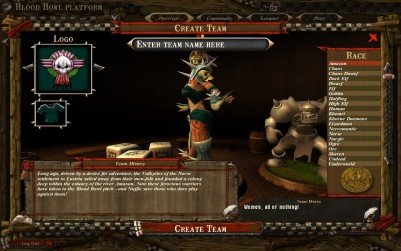 Let’s not forget rampant sexism, either.

Would I buy this game? I’ve bought it twice for myself, and four or five times for other people. I like the game; it’s the only way I can get into sports gaming, and sometimes I play with friends and we have fun. Would I recommend it for other people? It’s a little above average at best—at worst it is frustrating and obtuse. I find the game hilarious and good to scratch certain strategic itches but my tastes are also strange and often incomprehensible.

Guess who's coming back?