Hi, my name is Diana Gray! I’m here to review the new Jane Austen visual novel! First of all, I got Ashcroft, the super hot guy *cough* I mean, extremely attractive gentleman, and—

Michael, get out of my review!

I like visual novels, too! So why do YOU get the only eligible bachelor in the entire game?

Don’t worry, Michael, you get the nerdy, awkward bachelor. You’ll like him. He’s based off of you. 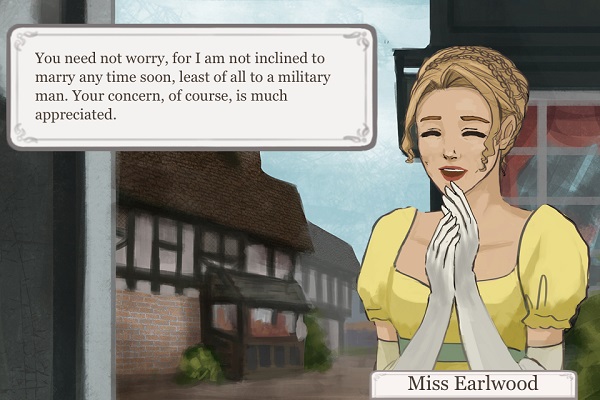 In Regency Love, you play as a young woman living in the English countryside during the 1810s. You follow through her life as she hangs out with her friends, goes to balls, and meets some surprisingly handsome gentlemen.

Even though it’s a Jane Austen game, none of the characters are taken from Jane Austen novels. Instead, they are all original characters made up for this game. The game definitely gets bonus points for having unique storylines.

The cast of characters is thirty people, each with unique artwork. There are enough characters and scenes that you can skimp on the romance/bachelor scenes and still end up with an entertaining (though much shorter) game.

In between scenes, you have the opportunity to answer trivia questions about the regency era. Answer them correctly, and you get points that you can use to level up your stats and unlock scenes.

Since I’m an expert on this time period, I finished the game will full stats and 250 points left over.

I just spammed the “hint” button to get the correct answers to the trivia questions. 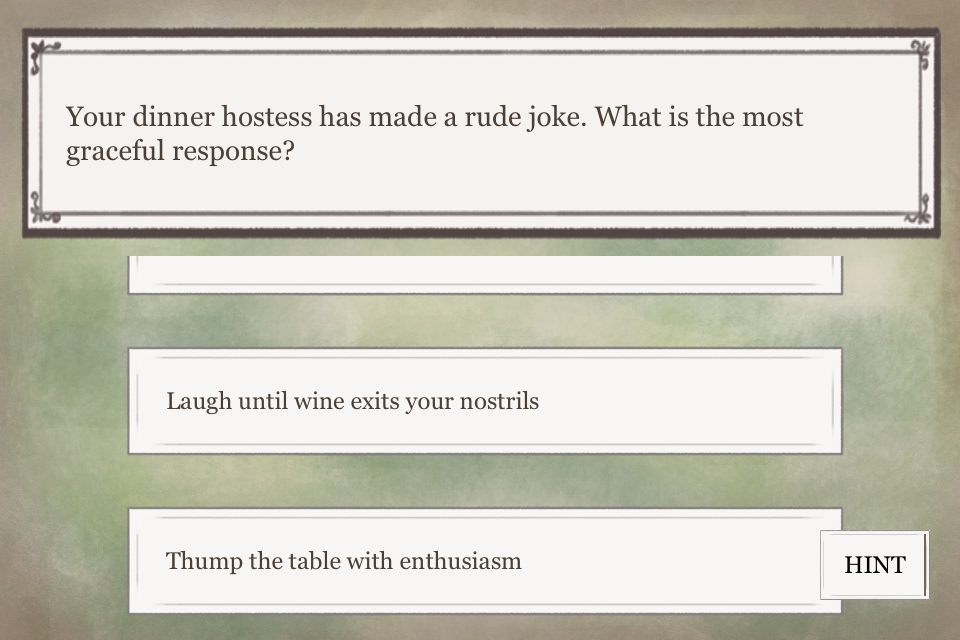 Ah, but let’s get to what you’re really here for. Here’s a list of this game’s eligible bachelors! 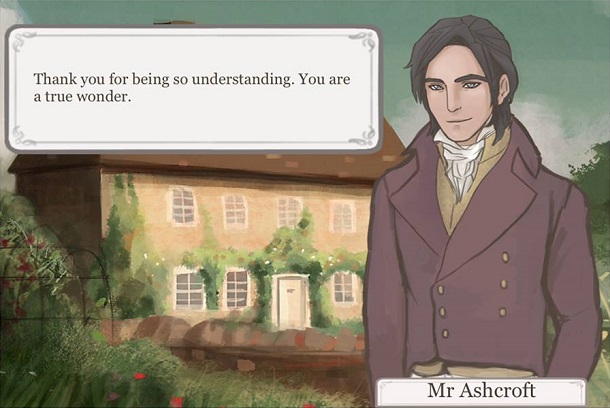 Don’t let his cold exterior fool you—Mr. Ashcroft cares deeply for his sister, Miss Elinor Ashcroft. In fact, it’s a little on the overprotective side, but that doesn’t matter, right? Anyway, as you begin to befriend young Miss Ashcroft, you begin to grow closer to the other Ashcroft as well. But, just when it seems that your friendship might grow into something more, an unexpected scandal rocks the Ashcroft family. Will you choose to stand by your love, or will you choose to protect your reputation and search for other (substantially less hot *cough* I mean, wealthy) prospects? 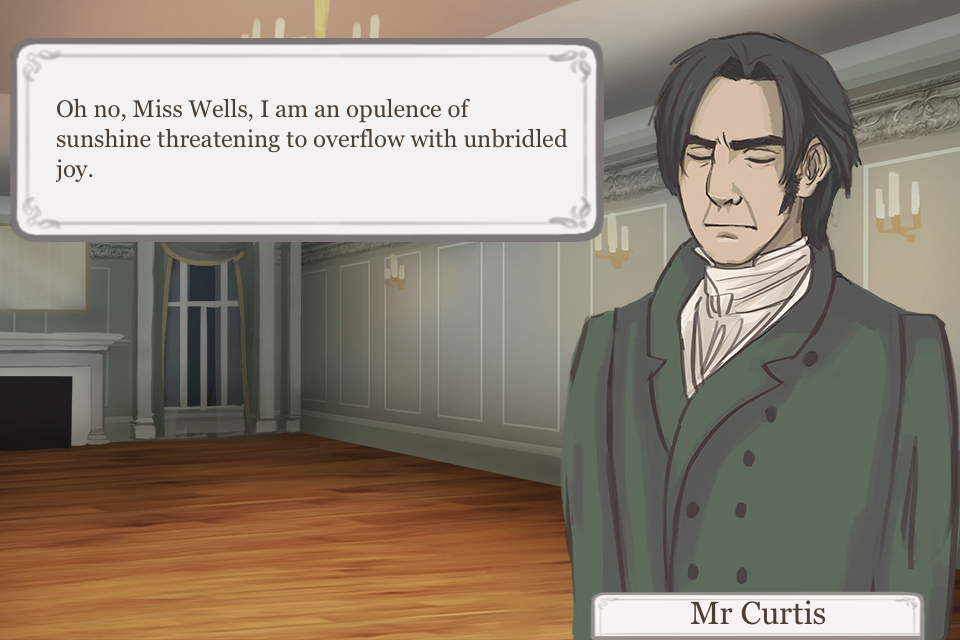 Mr. Curtis is basically Severus Snape from Harry Potter fanfiction. Eloquent, generally snarky to everyone, and with a love of fine literature, Mr. Curtis has a snazzy cravat and unique ideas about women and education.

As time goes on, it is revealed that his harsh exterior is due to a tragic death in his past, which is related to his evil rival, Mr. Everett. And of course, Mr. Everett has recently appeared in town with his new wife and son. Can your love help Mr. Curtis confront his past and get over his rivalry, or will he shut you out? 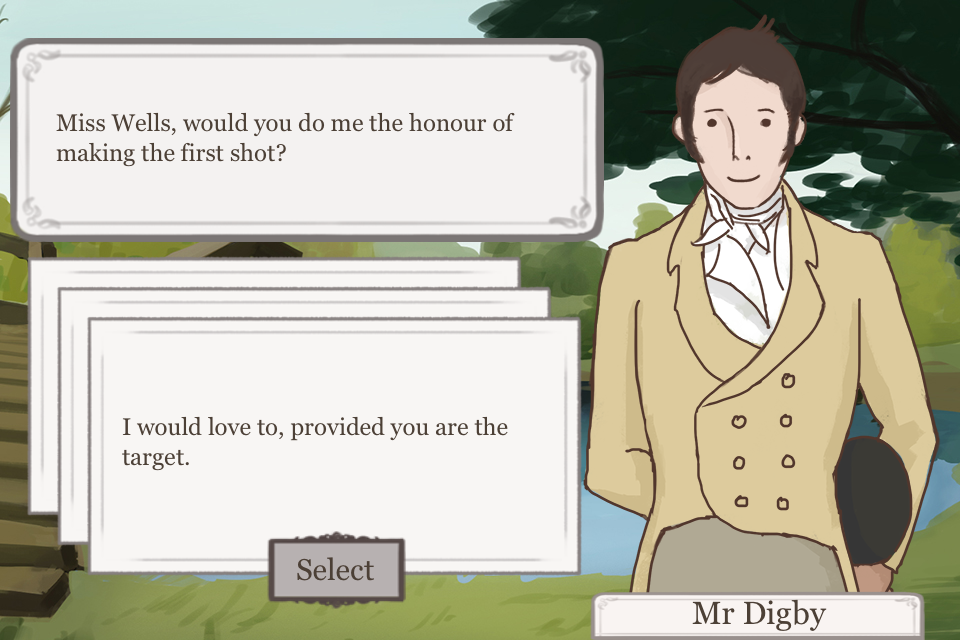 Also known as “Michael”, Mr. Digby is nerdy and awkward. He stutters and mixes up his words a lot, his favorite topic of conversation is the weather, and he utterly fails in his attempts to impress you. For example, when he tries to show off his archery skills, he accidentally smashes you over the head with a bow. From what Michael (who actually went for this ending) reported, you really can only get him by turning down EVERYONE else.

During all of the scenes with him, you are given several insulting, mean dialogue options. It is somewhat amusing to pick them and see his reactions. 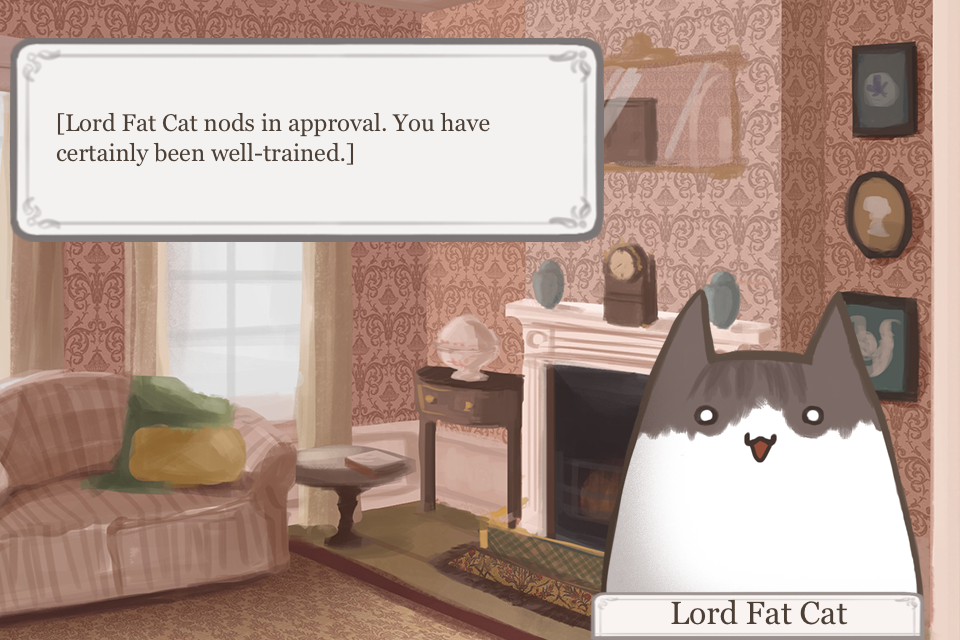 Lord Fat Cat deserves a special mention. His sole purpose in the game seems to be for amusing scenes if you gain enough stats, which is amazing. We were hoping he would be a bachelor choice, because let’s be honest—we all know he would have been Michael’s perfect match in case Mr. Digby didn’t work out. 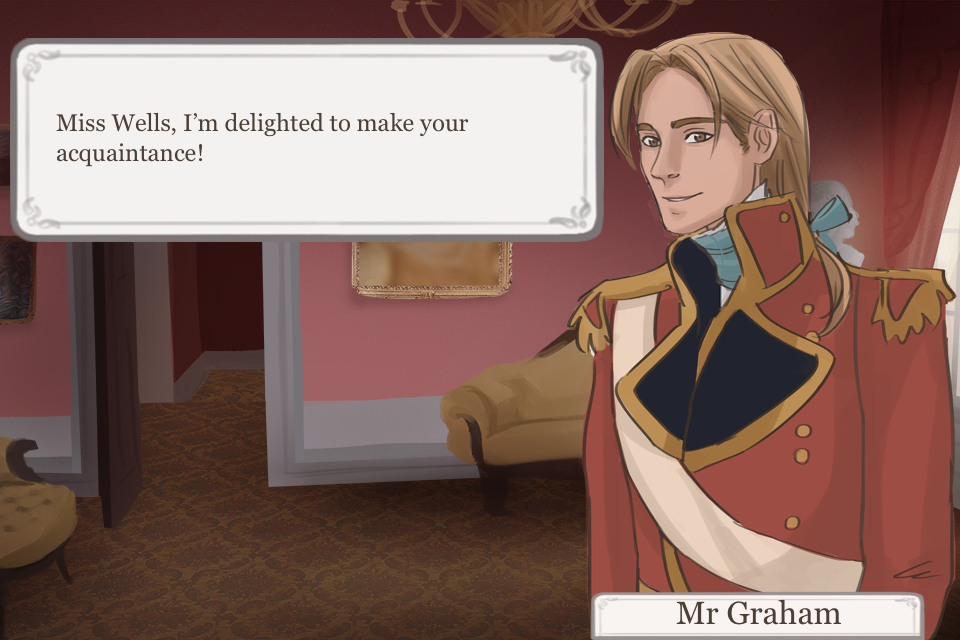 Rumor has it that there will be more bachelors in future updates to the game—including THIS GUY.

This game is so difficult! With all of these eligible bachelors, how’s a girl supposed to pick one?

Well, you have to make a decision, Diana. You can’t just flirt with all of them.

… Not intentionally. It wasn’t my fault! Mr. Curtis got mad at me because I was too nice to him!

Yeah…he came to my house and basically yelled at me for being friends with him while I was romancing with Ashcroft! It was totally out of line and super depressing.

In other words, you’re the town flirt. I’m disappointed with you. Not angry, just disappointed.

What?! No I’m not! I was just nice to him and he totally read too much into it! It happens all the time!

Look, this game is like real life. You can’t like more than one guy at once. It’s against the law.

I don’t! Ashcroft is mine! Curtis and I were just friends! It’s not my fault he had a crush on me!

Yes, it IS your fault, because you led him on!

I was being nice! I liked our conversations!

What would Mr. Ashcroft think of you breaking other men’s hearts like that?

Don’t you dare bring Marcus into this! CURTIS AND I WERE JUST FRIENDS! Hey, Mr. Curtis got his revenge. He insulted me very badly at Miss Ashcroft’s party.

When he called you a flirty tramp? That wasn’t an insult. That was the truth. Keep that up, and the only bachelor in your future is Lord Fat Cat. 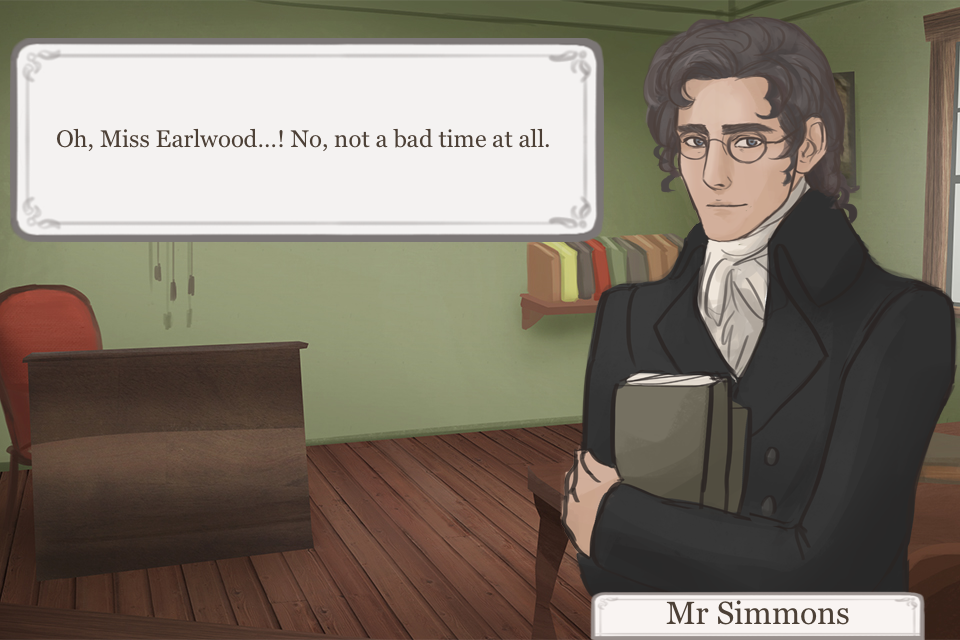 Diana’s personal problems aside, this game is fantastic. The music is exceptional, and the artwork is well done. Can you believe that only three people made this game? Because we can’t.

Seriously, this is the Jane Austen game that deserved $10,000 from Kickstarter.

However, there is one storytelling flaw with the game. At the very beginning, the game makes a big deal about a letter that your mother was sending to her estranged sister. However…it never gets mentioned again. We managed to get every ending and it never gets mentioned! What was in that elusive letter? We’ll never know.

Regency Love is now available on the App Store for the low, low price of $4.99. That’s cheaper than an eBook, and this is interactive! But wait, if you buy before January 15, you can get this brilliant game for $2.99! That’s a steal for great music and artwork and an engaging story. However, don’t be like Diana and try to pursue all three bachelors at once for fun and amusement. No one ends up happy.

A review copy was provided to GameCola by the publisher.

Do you know that moment when you've got nothing to do and you just feel like playing a random retro game? Well, let's just say for confidentiality sake, I had one of those moments. While searching thr