When you were a kid, didn’t you love riding your bike down the street and running into every other kid who happened to be on their bike that day? How about smacking them with a stick and kicking their bike frame to knock them off? Did you fancy taking items from their person and then mercilessly beating them until they went unconscious, or pushing them into street signs just to win a race?

Well, you probably would have if you knew you could get away with it. Luckily there is a game series devoted to doing just that, except with motorcycles! That series is called Road Rash, and today we will be talking about the third entry in the series: Road Rash 3: Tour De Force.

“Don’t move…there’s a fly on your face…”

Road Rash 3 (do not be deceived: It is not pronounced “Road 3 Rash”) was released in 1995 as the last installment in the series on the Mega Drive/Genesis. The whole premise of the game is to race against fourteen other racers and try to win on each track so you can advance to the next level. Sounds boring and very plain, until you realize you can beat the ever-loving snot out of the competition with a range of weapons and actions. Try to kick your opponent while driving 120 MPH in real life. Go ahead, give it a shot.

You have no idea how satisfying it feels to catch up to someone that’s been giving you trouble all race and knocking their ass off of their bike, followed by running over the bike out of spite. Truly, it is one of the most triumphant moments you can experience when playing one of the toughest races and the one guy you need to pass to win is writhing on the pavement in pain. Wait, what do you mean that’s sadistic?

The game is strung out over five levels that each have five locations to race at—Brazil, United Kingdom, Tokyo, Australia, and more. To complete a track, you must place in the top three overall. If you are successful, you will earn a trophy that signifies you completed the course. Once all five tracks on your current level have been completed, you will then be taken to the next level where the races are harder and longer in length.

Each time you finish a race, you will be paid in relation to the place you finished in: placing in a higher position will net you a bigger paycheck. You can use the money you’ve accrued to buy a better bike, or upgrade the one you’re currently using. That P.O.S. you start with won’t be able to go up against the big boys, so it would be a good idea to save up your winnings and blow away the competition with a brand-spanking-new bike. Then add some new tires, suspension, and chassis and you’ll be sporting a fine bike to help bloody some faces and stain your opponents’ uniforms with their tears. There are three different categories of bikes, and five bikes in each category. The bikes all have different properties, but the main differences are in their potential top speed and their endurance. The endurance will determine how much life your bike can have and how much damage it can take before being totally wrecked. 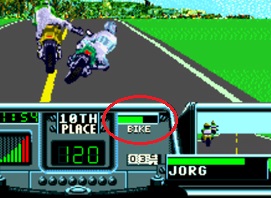 Take care of your bike…or else.

Every time you crash in a race or get knocked off your bike in some shape or form, your bike will take some damage from the crash. You know, logic! All bikes have a different life meter and typically more expensive bikes will have more endurance than the crappy ones. If your bike’s life meter is depleted in the middle of a race, it will explode and force you to pay a pretty penny to get it fixed. If you don’t have enough money…well sucks to be you! Game over, man! You can pad your current bike’s endurance by purchasing certain upgrades for it to ensure you and your bike finish the race in one piece. After every race your bike’s health will be replenished to full, as long as you complete it with your bike intact.

All racers have their own life meter as well, indicated in the lower left and right hand corners of the screen. When you hit an opponent or get hit yourself, the life meter will deplete based on the weapon used. Your life will gradually replenish as you race, but get hit too many times in succession and you will be making friends with the asphalt. To make sure that doesn’t happen, you must take out the competition before it can take you out! No worries if you get smacked off of your bike—you can get back on and continue the race, albeit with a severely shortened life meter until you’ve given it time to heal back. That is, unless you get…

That’s right: there are cops hiding around on the tracks and can pop you—if you give them the chance. If you crash your bike or get knocked off by any of the racers with a cop present, you’ll automatically forfeit the race and be slapped with a fine. If you don’t have enough money to pay your fine, you will be given the choice of creaming another racer in your place. Choosing “No” will result in a Game Over, and choosing “Yes” will result in the cop following you in the next race while you find the wanted racer and make them pay dearly. If you can’t knock the specified racer off of their bike before either one of you crosses the finish line, it’s Game Over.

It can take a long time to go through all five levels in this game and sometimes you’ll just want to save your progress in case of something unfortunate happening. Luckily there is a password system so you can stop playing whenever you want and come back later, or re-enter if something happens! It’s an easy system too: the passwords are only eight characters long and use just numbers and upper case letters. It’s not convoluted like SOME videogames… 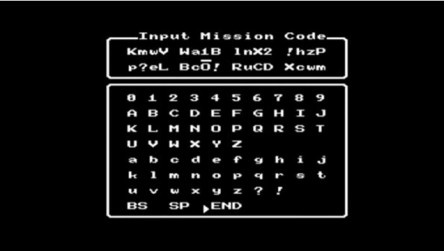 The game uses digitized graphics for the player models and portraits throughout the game, giving it much more realism than the majority of games that were available at the time. When you get pulled over by a cop, it’s not just some sprite thrown together to give the player a sense of what they look like; you’re given an actual picture of a person that’s supposed to represent the character in the game. When you come in first place and a rival rider wants a word with you, you can see what they’re really supposed to look like underneath the helmet and uniform, instead of a sprite-based re-creation.

As far as soundtracks for the Sega Genesis go, Road Rash 3 has a fairly nice one with crunchy rock music, with each track generally having a stereotypical tune turned into a pumped up rocking version of it. For example, the United Kingdom uses a variation of a very common “British-esque song” at the very beginning of the track. This game is widely considered to have one of the best soundtracks in the series, even being better than some of the later games in the series that were released on more advanced platforms. Sorry, but Sugar Ray in Road Rash 3D just wasn’t a good idea. In fact, Sugar Ray in anything is usually a recipe for disaster.

You won’t see Road Rash 3 placing in any “top of” lists on just about any format, but that doesn’t mean it isn’t a great game in its own right. The series helped popularize the racing genre as a whole and gave gamers a completely different experience. How many other racing games were out there that were just as much about racing as they were about using brutal violence to stay ahead of the competition? That was like every kid’s dream! If you didn’t like the way someone else looked at you or bumped into you, you could shut them up for good and gloat in their face from the finish line. You could finally give those bullies what for! All you want to do is race with your friends and then these douche bags get in your way! The nerve of some people.

If you have a Sega Genesis and can find any of the first three games in the series, I highly recommend you give it a look if you’ve never tried them out before. But if you have to choose between one of them, go with Road Rash 3. It’s not touted as the best one in the series, but it has more to offer in way of variety than the first two.

Credits: HarmonySword for the screencap of the Rambo password screen from their video, and Moby Games, Console Classix, and Oxmonline for the screenshots.
Special Thanks: GameCola, Electronic Arts

Aren't these penguins just the best?