The Shivah: Kosher Edition is billed as a religious (Jewish) game. I would be more inclined to call it a “murder mystery, which takes place in a Jewish setting”. That’s because the murder and the mystery get resolved, but the religious questions? Not so much.

To give some background, Judaism is currently split between two groups: Traditional Judaism and Modern Judaism. Traditional Judaism has a heavy emphasis on the Torah, while Modern Judaism emphasizes ethics. Some people say the differences between the two are so great that they should be considered different religions; others are extremely offended by such assessments.

The main character of Shivah is Rabbi Stone, a traditional Jew who is very adamant about never breaking the law. Sadly, his synagogue is run-down and only has two members—Rabbi Stone’s strict nature (and harsh sermons) has caused most of his congregation to leave him for Rabbi Zelig. Zelig is part of Modern Judaism, and he allows people to break traditional Jewish laws, such as the ones concerning marriage.

Eight years ago, Rabbi Stone had a huge argument with a man named Jack Lauder, who subsequently left Stone’s synagogue and joined up with Zelig’s. The two of them never saw each other again, but three days ago, Lauder was murdered. In his will, he left $10,000 to Rabbi Stone. Kind of odd that he would leave a lot of money to man he hated, right? Stone sets off to solve the mystery of the will, and his investigation runs so deep that he eventually learns who killed Lauder. 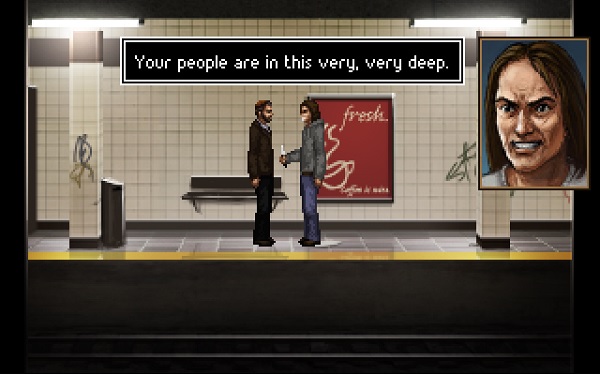 The original version of this game came out in 2006, and it won a special end-of-year award from us here at GameCola. The remake is mainly a graphics overhaul; the gameplay, voice acting and puzzles are all the same.

Hands-down, the most popular feature of this game is its “Rabbinical Mode”. With every dialogue tree, the last option is “Rabbinical response”, which translates to “Ask a question”. I do find it to be a nice touch, especially with the way it gets used during the ending sequence. However, as an adventure gamer, my favorite part of the game is the fact that you complete this game with only three useless inventory items, one of which is a dictionary and two of which are business cards. [Editor’s Note: Uh…spoiler?] That’s genre-breaking at its finest!

The game is about two hours long, and it costs $1.99, so that’s about a dollar an hour. I like that pricing! Combined with the fact that the original is somewhat hard to find, that makes this a pretty good deal. It’s not a bad murder-mystery, and the Jewish setting is very engaging. It’s not on my list of favorite adventure games, but I certainly wouldn’t mind seeing more games along the lines of this one.

Unless that translates to “every other game this company produces is a murder mystery starring a grizzled detective”, because that would get old, quick. Break things up with a happy, enthusiastic detective once in a while, will ya?

We're not talking about hexadecimal, but also we are