What is Ape Escape anyway? Ape Escape is a platform game with a rather odd storyline produced by Sony Computer Entertainment. You start the game as Spike, a fourth grader who is sent on a perilous mission through time to stop Specter, a white monkey gifted with high intelligence due to a helmet he’s wearing. It is up to you to travel through time to capture all the monkeys armed with the same helmets and stop Specter and his plans for world domination. 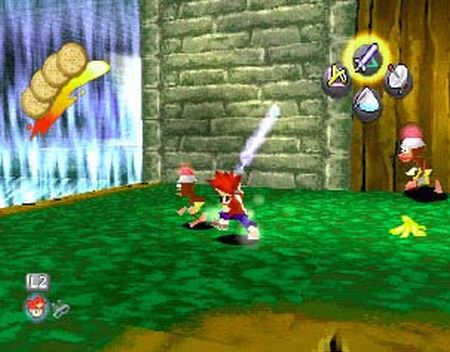 Now that seems all well and good, but let’s move onto the gameplay itself. I would like to start off with a very tempting topic: Difficulty.

I’ll be the first to admit it: I was a bit surprised at how difficult this game is at times. Considering how simple of an objective the game has, it can be difficult and even frustrating at times trying to capture one monkey. That’s also a key point that I like about the game. Take into account that the monkeys’ movements and actions are never the same in every playthrough of the game and it adds a tote of uniqueness. It also adds a key notch of difficulty that could very well vary, depending on how the monkeys react. A simple black-pants monkey (one of the most dangerous) can actually be really easy if you time your Time Net correctly (see what I did there?). Vice versa, a blue-pants monkey (one of the easiest) can wear the pants in this messed-up relationship and cause you such a hassle due to all of its running.

The controls, as mentioned before, are pretty cut and dry. The Square, Triangle, and Circle buttons can be used to hold 3 different tools. These tools can be set to a button in the Gadgets menu. Another wonderful point I found is the right joystick. I always find myself using the right joystick to look around my surroundings and get in the right position to catch that one marathon monkey. However, with all that aside, the one thing I found about the controls to be a bummer is the limit of items equipped at a time. I can’t even begin to name off how many times I’ve tried to catch a monkey, only to realize I don’t have my Time Net equipped. This is mainly due to my favorite set up (Sky Flyer, Stun Club, Time Net) being overridden literally by the RC Car.

The overall gameplay in general just astounded me and it still astounds me today. Maybe that could be the reason for its remake for the PSP. Sony can only know. Anyway, what I really like about this game is the zany story behind it. It’s not every day you play a game about catching monkeys and tripping them up with RC Cars, shooting robots with a slingshot, breathing in outer space—you get the idea. Coupled with the almost unpredictable movement of the monkeys, it adds up for a unique game experience every time. The gadgets also make for a fun experience and can help benefit in different and unique ways of obtaining your goal.

Oh, and did I mention that you can collect Specter coins to unlock mini-games? That’s right! Throughout the maps, there are these big coins that you can collect. After you obtain a certain amount, a mini-game becomes unlocked, which you can play with a friend or by yourself. It’s also a nice collectible when going for a 100% run.

Overall, I found this game to be a true treasure of my childhood. I even went to great lengths to buy the game for the PSP, then buy it digitally on the PS Vita. Even taking into account that the game is already 15 years old, I still find myself feeling like I’m 14 again. It’s truly a game that I find myself going ape-crazy over. Let’s just hope this kind of thing doesn’t happen in real life. Note to self: Don’t go bananas.

Not to be outdone by Nintendo's press conference last week, today in Tokyo, Sony officially unveiled the successor to the PSP: previously known as the PSP2, and currently codenamed "NGP" (for "Next Ge