What kind of Bomberman game doesn’t have multiplayer? Bomberman Hero, that’s what kind.

Bomberman Hero was released as a sequel to the hit Bomberman 64. It focused more on refining the gameplay elements and featuring more levels and bosses. The idea was to make a Bomberman title that featured a strong single player mode, possibly to follow in the footsteps of games like Super Mario 64. Adding all of that focus came at a relatively big price: not including a multiplayer mode entirely. 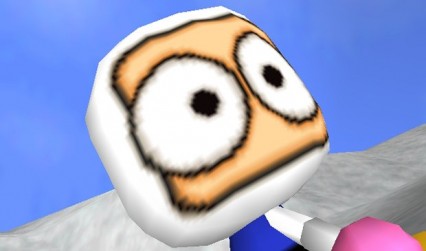 “What do you mean there’s no multiplayer?!”

While Bomberman 64 was more a three-dimensional take on the classic Bomberman puzzle formula, Hero is completely different from the rest of the series in that it is a platformer all around. In this game, Bomberman can: jump, throw and kick bombs by default, grab onto ledges, and take more than one hit without dying. Much of the gameplay relies on jumping over the many hazards and pitfalls that stand in his way, as opposed to traversing a puzzle-filled flat area. The bombs’ explosions do not run in straight lines like most titles in the series; instead, they have a more realistic orb-like explosion field. All that in consideration, Hero was vastly different from the normal idea of a Bomberman game—even more so than Bomberman 64.

Bomberman Hero on the left, Super Bomberman on the right. As you can see, the series went in a completely different direction.

One of the biggest parts of most Bomberman titles is their superb multiplayer modes, which is good enough that you can play by yourself against computers and have a good time. With the Nintendo 64 having the ability to feature four-player action by default (no multitaps or extra accessories required), it’s almost a sin to make a title in a multiplayer-heavy franchise that is exclusively single-player. Unless, that is, you devote your time and resources to refining the single-player mode.

So, if this game was made with all of the programmers and developers focusing on the single player aspects, that must mean the game is pretty good and relatively long…right?

The game isn’t bad, but it’s just not good either. The controls are a tad slippery and difficult to get the feel of, especially if you’ve played similar games like Super Mario 64, which had tight controls. Once you’ve given the game a decent amount of play you’ll get the hang of it, but it shouldn’t be such a chore just to get used to the controls. I wanted to kick a bomb at an enemy, not send my Bomberman into a bottomless pit of death. I thought I made that clear.

The story is reminiscent of Star Wars: a princess is kidnapped to a far away planet by a violent and unforgiving empire, and the hero is informed by a little helper robot. The hero then travels the galaxy to find information on her whereabouts and to destroy the evil empire. No, your father isn’t the main villain. No, the princess isn’t your sister. No, the coolest character of the entire game isn’t on your side and trying to mack on the princess. Okay, so it’s not too similar to Star Wars, but the bits and pieces are there!

You’ll eventually become familiar with how the game plays out, and after you’ve given yourself time to focus on your surroundings, this game becomes way too easy. Most normal enemies move and attack in incredibly predictable patterns, with very few compromising situations that would make you think before moving ahead. Many levels are repetitive and have similar layouts to other levels, making it feel like a drag. You’ll ask yourself, “Wait, didn’t I just do the same thing on the last planet like three times?” The only real difficulty in the levels is scoring a high number of points in each map to give yourself a higher clear score, which isn’t even necessary to complete the game. Basically, if you don’t care about points or unlocking a secret planet, this game can be finished in the time it takes you heat up a plate of pizza rolls. I know I’m exaggerating, but only by a little bit. When you get close to the end of the game the difficulty gets ramped up a bit, but you’ll have played enough at that point where the difficulty shouldn’t be that much of a problem for you, after a potential small bout with trial and error.

There is a total of 69 levels in the normal game—72 if you unlock the secret planet. This is where the game can take a great deal of patience, commitment, and becomes very lengthy: if you successfully record a perfect score on all 69 levels and find all 24 of the Adok Bomb items in the levels, the secret planet of Gossick will be unlocked. To get a perfect score on a level, you must kill all of the enemies and find all of the items on the map before finishing it. You can replay every level you’ve finished, so you can restart the level and take another crack at it if you don’t get a perfect score on your first play through. Unfortunately, you’ll have to collect all of the items and defeat all of the enemies without dying, otherwise they’ll all respawn when you restart the level. Sound tedious? You’d be correct, my fine reader! Just remember, throwing your controller won’t solve anything.

Barring the effort for a perfect playthrough, getting on a roll and making long strides to the game’s completion won’t take very long or be taxing on your skill as a player. As long as you keep good patience and use basic reasoning skills for most of the game’s mundane puzzles, you won’t end up losing too many lives. 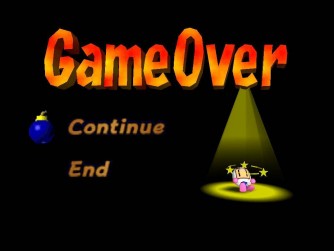 If you find yourself staring at this screen often, there may be something wrong with you.

In all fairness, the game is fun—in small doses. After you’ve played through a few levels and finished a section of a planet, you may find yourself saving your progress and turning it off, only to want to come back to it the next day to do the same thing. Because of the repetitive nature, the game gets boring during extended play and begins to feel more like a menial task that you need to get out of the way because no one else will do it. Gripe all you want, but if you want to finish the game you’ll have to bite the bullet and rinse-and-repeat your actions until your hands are pruned.

I wouldn’t recommend it overall—with virtually no replay value, woozy controls, repetitive game play, uninspired story, choppy graphics and models, and bosses easier than Kraft Macaroni and Cheese, the only real positive thing about this game is the length if you’re going for a perfect game. Why, I don’t know. If you’re a fan of 3D platformers, you can find enjoyment out of it in some shape or form. Just don’t expect an epic adventure to write home about.

The Ominous Voice makes its final farewell in this tender and poignant edition of That's So Cliché.