With a name like Kid Chameleon, I was expecting this game to be something like that Chameleon Twist—I’d be gadding about jungles, eating flies with an elongating tongue like Yoshi or something, but no.

Kid Chameleon is a side-scrolling platformer, because it’s not like we already have enough of those blasted things. It was developed by Sega Technical Institute, who have a rather fitting acronym.

Just kidding, STI are responsible for many great games, including Comix Zone.

So, Kid Chameleon. In this game, you play as a punk kid named Casey who thinks he is a hot shot. There’s this new arcade in town called Wild Side, but when you step inside it’s like you’re inside the game. Casey, being a smug, arrogant prick, thinks he can beat the game. Everyone who has played it has lost, and they’ve disappeared after losing. So, how is the arcade still allowed to operate? Wouldn’t there be a police investigation or something?

Kid Chameleon was included on that Genesis / Mega Drive package for Xbox 360 and PS3, and that was when I first gave it an actual decent effort. And I hated Kid Chameleon, though less than some of the other excuses for games piled onto that cart.

This is not so much a difficulty curve as a difficulty wall. With another wall built on top. And another. Too hard for you? Go home and cry. Unless you are home already. In which case, just cry. 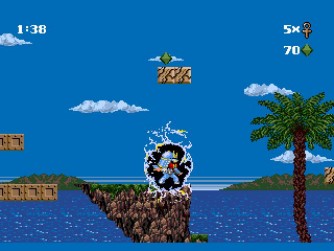 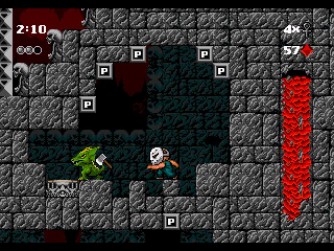 The presentation of Kid Chameleon is spiffing. Bright skies, detailed backgrounds and interesting enemy designs. The little lizard things, they’re so cute. But the game is such a liar. It even has the word in “kid” in it’s name, but this isn’t a game for kids.

The main gameplay mechanic is the ability to wear outfits and gain powers. Like Mario before him, Casey can collect different hats—well, they’re masks really. Each one gives him a set of powers, but also different attributes. Some powers last for only two hits, others for three or even four. Each mask also comes with its own stat changes, such as making Casey faster or weigh more. Slightly different to the “one-attack” powers from Super Mario.

The power-ups include a Jason Vorhees-style outfit with hockey mask and bloodied apron. While using this power, you can throw axes. It is my favorite power in the game. Wondered why the game is called Kid Chameleon? Because you play as a kid who keeps changing shape, like a chameleon changes its colors. Ha!

If the game played like Super Mario, I’d be a lot more forgiving. But no, it doesn’t. Kid Chameleon is a floaty piece of crap, and there are so many things that can hurt you. Basically, to complete the game, you really have to complete the “perfect” play-through. And you have to train yourself to do it. By dying over and over, and playing back up to where you got. No saving, no passwords. 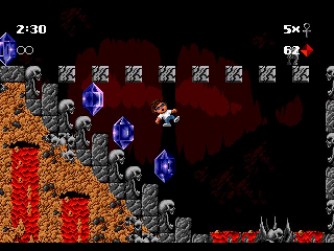 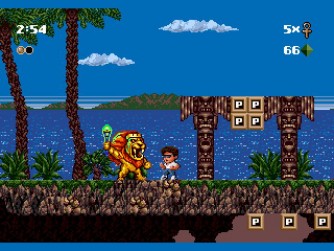 Good luck getting anywhere. On your first playthrough, you might not even make it three levels in without Game Over. “So what?” That’s what Kid Chameleon thinks. “So what.”

It’s a shame such an interesting game has such hard gameplay and butchered controls tied to it with barbed wire. The virtual reality idea is played up swell and the soundtrack is oddly brilliant. The art is great, but when is the art not great on a game Brenda Ross worked on?

This game makes Zool: Ninja of the Nth Dimension look like Animal Crossing. It is a rag that has accumulated the collective sneezes of the Sega Technical Institute team until it evolved into a hatred-driven monster. And yet, I can’t hate the bastard thing.

The challenge is phenomenal, but doable. You’ll feel like Kanye West when you’ve forced yourself all the way through it. You get to decide whether I mean “I’m a God” Kanye, or propped-up-in-a-hospital-bed-and-sucking-food-through-a-wire Kanye. 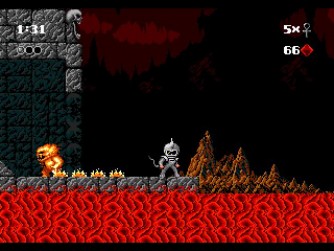 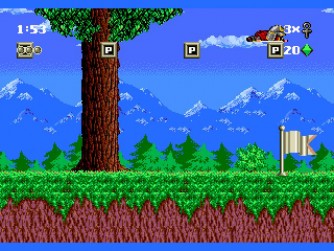