You’re living a peaceful life as a member of an intergalactic species. You go about your business, doing your chores, going to work. You talk to friends on the way. And then, something awful happens. Mysterious invaders appear in your skies, shooting down your defense fleets, beaming infantry and armor onto the surface of the planet, killing and capturing everyone you’ve known and loved. Somehow, you find a small vessel with just enough fuel to beam away toward a random world in the Alpha Sector. You’re safe from the invaders, but you realize you have no food, and so you make planetfall to see if you can even survive in this cold and uncaring universe. 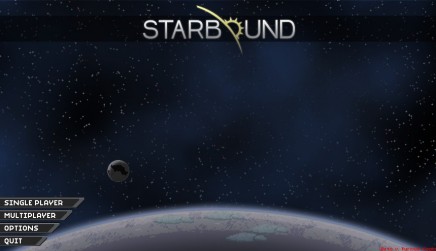 Well, this is a boring title screen, I’m done.

Starbound is an awesome and award winning game—even GameCola gave it some sort of award, I hear—that took 2013 by storm despite being at the tail end of the year, and still in beta, no less! But, with over 42 quadrillion worlds, 10 times that planned for release, this game offers a lot of content despite not being finished. Starbound is the spiritual successor to Terraria, a game described as “2D Minecraft“, designed around exploration as well as creation. Universes will be procedurally generated after the game officially launches, but for now everyone has the same universe, and even then there’s still a lot of surprises left to find.

Your ship hovers over your planet, waiting for you to beam down.

You pick one of six (seven when the game is fully released) races with differing aesthetics and history, from the militaristic Humans, to the advanced Apex, to the Avian zealots, to the ever hungry Florans, to the primitive Glitch, and the peaceful Hyalotl, with eventual plans to add the forgetful and rowdy Novakidd. With unique items and bonuses, each race differentiates players and provides a reason for multiple players to band together with different races. Each race also has its own set of lore and buildings that can be found on the planets, which give you an idea of how they lived on their homeworlds and what their cultures are like.

Not all NPCs are your friends, though!

Despite being in beta, Starbound has no lack of things to do! Crafting all the way up to the end tier is available, from Alpha Sector’s mundane gold, iron, copper, silver, and platinum, up to the mysterious materials of Sector X! As you explore more dangerous sectors, the buildings found on planets become more and more elaborate with greater hostilities! As well, you can capture animals and use them as pets, hunt legendary monsters, discover lost technology, or build monuments from any number of materials. You could start a farm, raise livestock, and prepare that food, or even cross the galaxy looking for recipes to become a master chef. Or just collect it all. Whatever you do, Starbound is a game that’s not meant to be rushed. 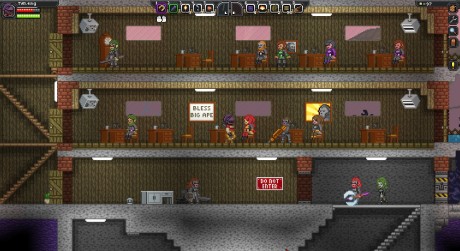 An example of an NPC community. This one in particular is three or four buildings, and is home to some Apex.

With all of this awesome stuff going on, faults still exist in Starbound. Monitoring hunger is a real pain, requiring you to use an imprecise ranged weapon or wait until you have iron to satiate. Materials, as well, can be difficult to find, and your single-player game could have you stuck on a world where there’s no wood on the surface, and coal is hidden beyond tough-to-break rocks. The monsters themselves can be a pain, with some being stupidly quick and aggressive, and those birds will forever haunt your nightmares—there’s no way around it. As well I’m disappointed that the Novakidd and the Glitch are gendered (I have heard the explanation), as the former are plasma-based consciousnesses trapped inside shells, and the latter are a robot hive mind. With these faults, though, Starbound is still a solid game. 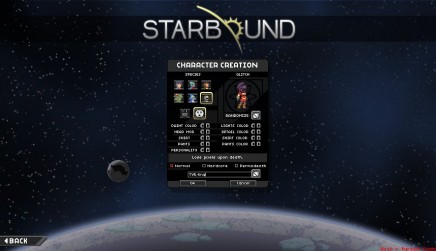 Still baffled why it’s necessary to gender robots instead of letting them choose whether to be…uh, top-heavy.

Starbound is a great game full of things to do, stuff to build, and planets to renovate and terraform. With slots for vanity items to further customize your character; 400 quadrillion worlds planned for final release; and plans for randomly-generated missions, PVP, and mod support, Starbound is going to build into a great game. I would certainly buy it again—I’ve played it through countless character wipes and universe wipes. I give it a glowing recommendation, and it probably deserved whatever award we decided it should have.

Dig Dug: Digging Strike is the type of game most people pass over when they're seeing what titles are for sale at the Burlington Coat Factory.