Let me state right off the bat that I was unable to complete this game in time (see: “Dear Readers“).  I have done my homework on it, though: I’ve read multiple reviews, visited multiple fan sites, viewed walk-throughs, talked to people who have beaten it—and I’ve gotten pretty far in it myself.  If you don’t feel I have the criteria to review Chrono Cross, then don’t read this.  But with all I’ve read, and played, and talked about—I believe that I have a solid concept of what this game is about.

Your representative main character is Serge, one of those strong/silent varieties of hero.  Serge leads a pleasant, innocent small-town life, where he is exceedingly popular with his fellow citizens.  One day, Serge and his sweetheart Lena take a trip down to the local shore, a secluded locale known as “Opassa Beach.”  Without warning, Serge has a painful flashback and falls to the ground.  He is awakened by the shake of an elderly townsperson who’s found him lying in the sand, and returns to his familiar home of Arni.   Only, the familiar feelings is not quite mutual; the townspeople, including Lena, recognize not their beloved Serge.  Alone in a town of friends, Serge begins his quest to decipher just what in the bloody hell was going on.  In doing so he meets all kinds of kooky characters, travels across the world in not one but two dimensions, and vies with others to gain possession of the “Frozen Flame,” which gives its beholder the power to bend space and time. 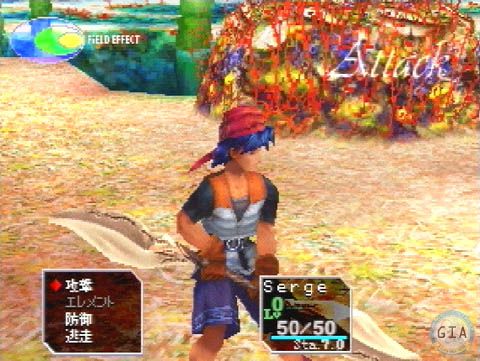 Obviously Serge isn’t going to be alone in is adventures; an RPG just wouldn’t feel right if there weren’t several lesser characters following your main.  And oh, lesser characters he does have follow—up to forty-five of them.  This would be one point where the replay value kicks in, for in order to collect all forty-five of the characters, you need to play through the game at least three times.  An RPG that makes you want to complete it one time (oh, I will, someday) is hard enough to come by, but one good enough for three times through?  Unheard of.  This begs the question of whether the characters are actually worth such a load of time (each game takes about thirty to forty hours), to which I say no.  The sheer number of possible party members leads to a severe lack of character development, a major downfall for Chrono Cross.  No, the characters by themselves are not worth that load of time.  Thankfully, there’s a lot more to the replay value than just characters.

Chrono Cross is never the same game each time you play it, unless you go nuts and complete it six times.  But even then you’ve still got three endings to go, so to absorb every last drop of this game is quite an impressive feat.  The characters you meet, the adventures you complete, the information you learn, the endings you earn—they can all change based on the decisions you direct Serge to make.  Assuredly you will tire of defeating the same bosses again, or of viewing the same cutscenes again, or of following the same basic story line, but the game’s worth going through more than one time, at the very least.

Collecting all available characters to you is one thing, but you’ll need to develop their skills if you ever want to make it to any of this game’s finales.  Thankfully, Square decided not to be major headwires with Chrono Cross, and tossed those obnoxious random encounters straight out the window.  Instead, all enemies are shown on the screen, and you can choose to avoid them if you dislike able-bodied party members.  Even if one touches you and the battle screen is launched, you can run away whenever your turn arises—even in boss battles.  Of course, you can’t progress in the game if you fail to defeat a boss, so to do so you’re going to need to make use of Chrono Cross‘s system of magic, called “Elements.”  Elements are spells that you can either purchase from a vendor or find on your own.  Each element is marked by a specific color—either red, blue, yellow, green, black, or white—as is each party member and enemy.  The color specific to a character tells you what color element damages it the most:  black damages white, blue damages green, and so on.

Chrono Cross features some of the most awe-inspiring cutscenes that I’ve seen on a PlayStation 1 disc—they look straight out of a first-generation PS2 game.  The same cannot be said, however, for the visuals in the game itself; if you examine the screen at all you’ll notice some definite old-style pixelation.  Chances are that you won’t examine the screen too much, though, because you’ll be too busy letting the beautifully orchestrated Chrono Trigger-reminiscent musical score seep through your arteries.  I won’t get into too much detail with that because the soundtrack itself is detailed later in this issue, but let me just say that each song fits each atmosphere perfectly. 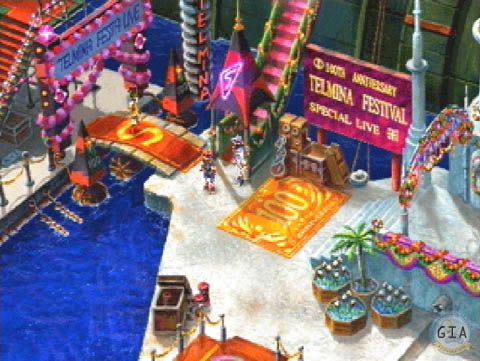 So there it is—the inevitable sequel to one of Square’s finest.  We then must ask ourselves the inevitable question:  Is it as good as Chrono Trigger?  Suffice it to say, that’s a hard one to answer.  Chrono Cross is obviously going to have the upper hand as far as audio and visuals are concerned, but Chrono Trigger definitely wins in character development and storyline.  Who knows, maybe I’m just a sucker for time travel, but I enjoyed visiting the plentiful epochs of the same world more than I enjoyed visiting the two dimensions of the same world.  Plus, as Chrono Trigger progresses, you can actually grow attached to your party members, which is impossible in Chrono Cross due to character overflow.

In the end, I pick Chrono Trigger as the better game, if not for the prior two reasons, then because its story has an even flow to it, whereas Chrono Cross seems to be all over the place.  But that’s just like saying Leonardo is a better Ninja Turtle than Michelangelo—when you get right down to it, they’re both simply amazing and worthy of your love and affection.

Borrow, buy, or steal this game as soon as humanly possible.