Oh, joy, a licensed game for the iPad. Let’s start this review with a song, shall we? 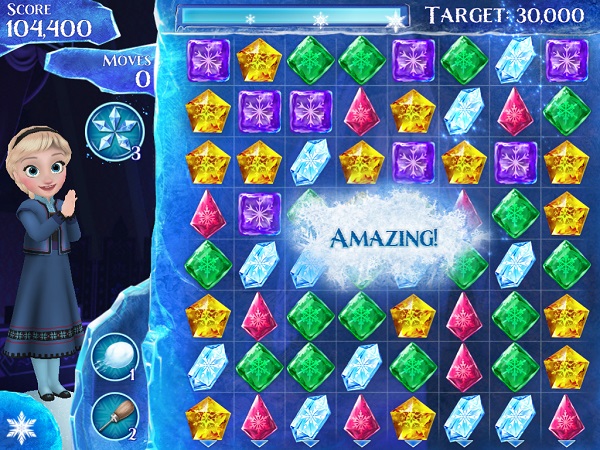 In recent years, the iOS has seen several crossover Disney games. Basically, Disney pays to have their licenses slapped on whatever game is currently popular as a way of promoting a new product. That’s how we got the Brave and Oz editions of Temple Run, the Monsters, Inc. edition of Mega Run, and Duck Tales 2—which is also known as Mega Man 4.

Thanks in part to a lackluster performance in the console market, Disney has started developing their own iOS games. Given their tendency to ride on the coattails of whatever iOS game is current popular, it should come as little surprise that Disney decided to promote Frozen with a Candy Crush clone.

Seriously, this game is Candy Crush. That’s basically all I need to say. If you’ve played Candy Crush, or any other match-3 game to some extent, you know what it’s like. There are a few nice touches that tie the game into the movie, but in the end, the game fails to rise up past its roots as a knockoff game with a license slapped onto it. 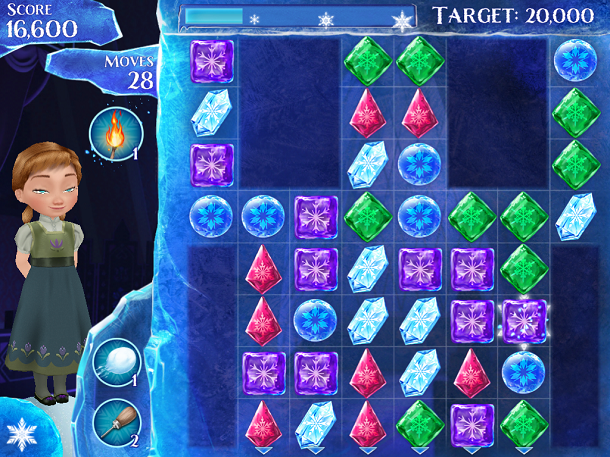 In this game, you make matches of three while various characters from Frozen stare at you awkwardly. Sometimes, they applaud when you perform successful moves. It’s a nice touch, but I’m a little disappointed that this is what Disney made additional animation for. You’d think they would animate something for Disneyland, or even make a movie preview which isn’t completely awful, but no. They saved their bonus animation for an iOS game.

The music in the game is not good. None of it comes from the movie’s award-winning soundtrack, because…um…well, I don’t know what the reason is, but I’m sure there is one. Maybe Disney doesn’t have the rights to the movie’s music.

The level design and gameplay is pretty typical, but since the market is overloaded with Match-3 games at the moment, it is hard to find a Match-3 game with unique level designs that don’t rely on gimmicks. As per usual, the game starts off easy, and its difficulty level eventually reaches unfair levels where your only legitimate chance of winning is paying money for special items. Don’t they know most people don’t pay money in these games?

In conclusion, this game is a bit of a fixer upper, and since this is not the first time in forever, I’m gonna let it go.

What's dragging Mister Mosquito down is the fact that said concept is the lone factor behind the game's creation and playability.