In the past, more on my own devices than on GameCola, I’ve ranted on the subject of how closely scrutinized gender roles have been by the gaming community. I hate joining choruses of people, and so much so that I refused to give in to this ideology that really swept across 2013. For those who somehow missed it: gender, gender roles, and feminism played a really hot ticket on gaming blogs and columns for much of that year. This was natural given that gender roles and feminism have been hugely relevant in our social culture, as well they should’ve been, but many times I felt like the gaming community was over, over-scrutinizing elements and demanding infallibility for their “facts” just because it was on the side of right.

I am a quasi-Republican, white Christian male after all—chauvinism is practically tattooed on my forehead—but I still couldn’t feel I could lend any support to articles saying Princess Peach is responsible for holding women’s equality back, or that liking characters with big boobs is because I was molested as a child and had issues to work out, and then declaring if I didn’t agree with these “facts” it’s obviously because I don’t listen to the plight of women everywhere enough and I’m a typical knuckle-dragging Neanderthal.

But this column is not devoted to me rehashing my problems with modern feminism; I wanted to talk about whom I considered to be a proper videogame icon for women to aspire to be. I want to give an example of what I think defines a strong woman, from the perspective of someone who supports gender equality, but can’t stand the idea that the word “feminism” is used as a synonym for gender equality.

My icon is Lenneth Valkyrie of Valkyrie Profile. 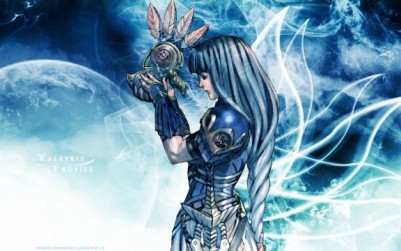 Besides being the most recognized character of a series that is sadly still underrated, she is also the main character of the first game, with appearances and significance in the others. She is a Valkyrie of Valhalla and her job is two-fold: collect dead warriors to serve Asgard and kick monster ass in Midgard. She already begins her quest as a goddess, but by the end, she has transformed into something much more, and all of creation is better off for it.

If you hate spoilers, you’ll want to skip this next section.

Her path to this is appropriately as dark as it comes. A female icon isn’t forged out of anything else, is it? She is a Valkyrie reincarnated from a pitiful human named Platina, a child who lived at a time where real persecution for women, serfs, and anything weak truly reigned supreme. She was about to be sold into slavery by her sick, twisted mother, where she would spend her life being ruled by a truly sexist male dominance. She escaped with her friend and love interest, Lucian, only to meet a tragic end inhaling the poisonous grain of a field. From there, she sleeps until she is reincarnated as Odin’s personal recruitment, a salvage-and-destroy operator with all memories of her past locked away.

But what makes this game interesting is that her own journey to self-discovery and rebellion from her position against the ultimate chauvinist title of all time (the “All-Father”) is not really the center stage of the game. In fact, you can basically even choose Valkyrie to blindly submit to Odin if you want, or if you want to take a more difficult path, breaking free both herself and the chains that shackle gods and men. The latter option is intentionally made difficult and obscure (really, you wouldn’t even know how to do it unless you looked it up) to really impress upon the gamer how hard that is to do.

Instead, much of the focus of the game is the other Einherjar, the other pitiful saps whose lives come to tragic ends. When she goes to recruit them, we see vignettes of what brought them to this sorry state and their “Interview With a Valkyrie” (I couldn’t resist). She finds louts of all sorts—broken-hearted lovers, thugs, soldiers who couldn’t make right of their circumstances and left others behind, and other monstrosities. Lenneth plays judge during the interview phase to weigh their sins against their worth as potential gods, but she isn’t really interested in their business. She’s on the cold side of the stove. She’s a professional doing a job, and while helping out their last wishes is on the menu, she couldn’t really care less about them at all.

As the game goes on, and she sees more and more of what these humans have to go through, something starts breaking in Lenneth. As her soldiers plead with her to let them try to make right, she begrudgingly agrees to help them out—this includes taking one soul for another, allowing broken-hearted lovers to send one more element of affection to those they left behind, even taking off her helmet to see if she reminds one of her Eins of someone they knew. She occasionally muses on the subject of love, wondering why she’s playing matchmaker at one point and memorably stating, “Love cannot exist between gods and mortals,” or something like that.

Then, as the game continues to progress, after nearly a dozen soldiers are recruited as Einherjar and dozens of vampires and demons get their asses handed to them, Lenneth starts finding clues that unlock her own dark past and start building within her an independence from the gods above. She slowly starts warming up and figuring out something else is going on—something else is wrong. Just before she digs too far, she is destroyed, and it requires a near deal with the devil to bring her back in a new body, thus retaining her strengths and freeing her from her own supernally imposed prison. In the last chapter, she storms Valhalla during Ragnarok only to find that Odin has already fallen due to the circumstances of his own past sins and the complications that came from it. The All-Father was never the big bad, though; it’s Loki who set out to tear creation a new one and stuff it all back up the old one. He lets loose the apocalypse, and it swallows everything. 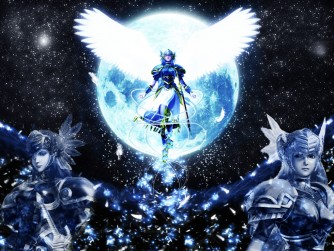 She comes back even more godly then ever, and the compassion she acquired for all living things on her quest and reconciliation with her own oppressive past literally allows her to bring creation back to the void. The power of her love saves the universe and ends the nightmare once and for all. She is reunited with Lucian, and all will be well.

This small series of paragraphs barely even outlines the complex struggle of the game’s 60-hour quest, but at least now you have a context for Lenneth/Platina.

Here’s why she’s a true icon for women—not just gamers, but all—to look up to:

The real reason Lenneth Valkyrie exudes proper feminism and womanly strength is a word feminists and activists today forget anything about: BALANCE. Lenneth Valkyrie’s balance of character makes her flawless as a person, and her only flaw you even see are the consequences derived from the god of all gods to have to design a locking mechanism for her! Here we see it truly is the fault of man trying to keep a woman down.

What is balance, you ask? I figured you wouldn’t remember. In our society today, we only recognize the extremes and give only them any credence. We only look up to the loudest women, the ones who won’t compromise an inch without an argument, the ones who take the least bullshit and tolerate the least adversity, the ones that fight the hardest, party the craziest, and go against “society” at any and every opportunity with smug smiles on their faces to make sure everyone around them can see what a self-proclaimed hero they are. We substituted balance for pride as the generator of strength.

But Lenneth never uses pride as her generator. She wasn’t designed to be a feminist icon, an underdog fighting the system, or a pinnacle of womanly strength…she just IS. True strength of character is not WHAT you do, it’s what you do WHEN.

She does not have a “take no bullshit” policy. She knows when to take bullshit, and when not to.

She does not have an anti-dress policy. She knows when to wear a dress and when to wear armor that few men ever deserve to even look at.

She is not a bitch trying to compensate for years of womanly oppression with attitude. She knows when to use her authority over mortals, and when not to. She’s the least corrupt god in all of creation.

She is an obedient soldier to her master, but she is no one’s doormat. She knows when to march, and when it’s time to fuck things up for a better tomorrow.

She doesn’t need to impress anyone with her intellect, she’s wise and strategic. She knows when to lead with the sword, and when to pull back with the bow.

As the Goddess of All Creation, she does not need a man in her life to satisfy her, but her heart literally overflows with the love she has for all things to the point where it recreates everything after the fucking apocalypse has reduced it all to beyond molecules.

For Lenneth, it’s never about Lenneth—it’s about everyone else. She has no ego even when she gets her ego back. She doesn’t fight for women; she fights for the world, for good and justice and love eternal, and she fucking WINS.

This month on "Inside the Guide", we focus on guides for puzzle games.