Don’t play Line Rider 2. In any form. On anything. Ever.

Time for some backstory:

Back in the early 2000’s, browser games were all the rage…well, at least for the preteen crowd. For people with limited funds, free online games were the easiest way to get some fun, and all you needed was some random computer. While you can read much about some of these games from their heyday here, one of those little games was Line Rider, which some might be describe as the Minecraft of browser games, at least for its time.

Line Rider was a simple game about a guy on a sled. You could draw lines with your mouse and, through the power of gravity, your little guy would sail down your slopes. You had lines of different types: A regular line that you could slide down that had a little friction, a line that sped up your sled, and a line that was just decoration to make your course look interesting without having to worry about your poor sled-man running smack into a wall.

The main attraction of the game was to create a cool looking course, and either put the level code (which the game conveniently provided for you) somewhere people could copy it and put it in their own track, or to make videos of the cool stunts. Much like Minecraft (the analogy of the day), the game thrived on its user-created content and was a nice little distraction.

But, if Line Rider was Minecraft, then a little game called Free Rider 2 was a modpack. And, not just any modpack—a great modpack. Free Rider 2 allowed you to have controllable vehicles, whereas Line Rider had a sled that you had no control over. You could fly helicopters in Free Rider 2, change the direction of gravity, and still do all the course sharing and level making that you could in Line Rider if you wanted to. The system worked just the same, and Line Rider became a poor man’s Free Rider 2, and since we’re talking free games here, that meant Line Rider was just uncool.

So naturally, what do we do with a game that’s slowly becoming irrelevant? Why, we put it on another platform of course! And thus we have the “sequel” to Line Rider on the Nintendo DS. Now to be fair, it doesn’t sound like such a bad idea in theory; the DS’s touch controls would work well with the line drawing of Line Rider, and the system was so popular that there was no lack of a market for the game. Unfortunately, the execution brings to light how the transition didn’t go quite so smoothly. 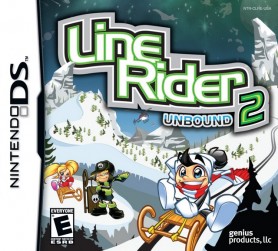 You’ll get the first impression that the creators of Line Rider 2 are way out of their element from the fact that the game has…well…cutscenes. Not even good cutscenes either—the frame rate on them is so downright atrocious that even a certain ColaChief of days past would notice. The shorts feature three characters: Stereotypical boy, stereotypical girl, and stereotypical evil boy. The scenes play throughout the game and feature what feels like a series of rejected bits from a Tom and Jerry episode about sledding.

The next problem to point out about Line Rider 2 is its genre. It’s a puzzle game. Rather than focusing on creating your own courses, the levels set up predetermined tracks with pieces missing where you can draw. Pretty much all freedom to be creative is taken away, as most of the solutions involved connecting the lines or finishing a loop while giving the correct speed. The levels are set up in such a way that there isn’t even room for any interesting alternate solutions, as you are given the bare minimum of space to work with in order for you to come up with the right solution. Honestly, the game feels more like one of those games where you’re given the pieces of a puzzle and challenged to put them in the right place, kind of like The Incredible Machine, except with as little room for creativity as possible. 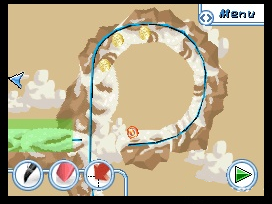 Another juncture from any sort of fun to be had with this game is the simple fact that coming up with the solution is only half the battle, and is generally the easiest part. However, actually getting the game to enact your solution is another matter entirely. Since you draw with the stylus,  too often a slight move up or down will send your man careening sled-over-heels, warranting you a restart. While the game isn’t quite so bad as to be one of those games where your creation has a different outcome even when you don’t change anything, redrawing the same thing you had before can often lead to incredibly different results. This means that you will be spending a large portion of the game simply tweaking your solutions bit by bit until they work. It doesn’t help that the game is very particular about which way you draw the line; if you draw it from right to left you’ll end up drawing it upside-down which basically flips out the character. It makes things a mess to be sure.

Of course, this wouldn’t be as bad if things worked in the game the way they were supposed to, but sadly they don’t. An example of this is the purple track introduced into this game—which is supposed to crumble out from beneath you after your sled rides over it—will often stay put, leaving you to tweak things around until the whole line disappears like it’s supposed to.

If there were any slightly redeeming qualities about this game, it would be some of the music tracks. Most of them are uninteresting ambient whooshes and swooshes that are so boring that you’ll forget about them while in the process of listening to them, but a couple, particularly one featuring yodeling, are quirky enough to be interesting. Thankfully, the game lets you pick which tracks come into the rotation of music, so you are free to block out any of the songs you find particularly grating.

I wouldn’t exactly say that I had high hopes for this game, but I never expected it to be such a mess. Of course, it’s more disappointing than actively bad, and part of its problems stem from the lack of a userbase that makes the kinds of maps that were really one of the biggest draws of its original incarnation. It simply doesn’t stand well as a single-player experience. If you need your fix, stick to the Flash games.

Is the third Snark Busters game a must or a bust?